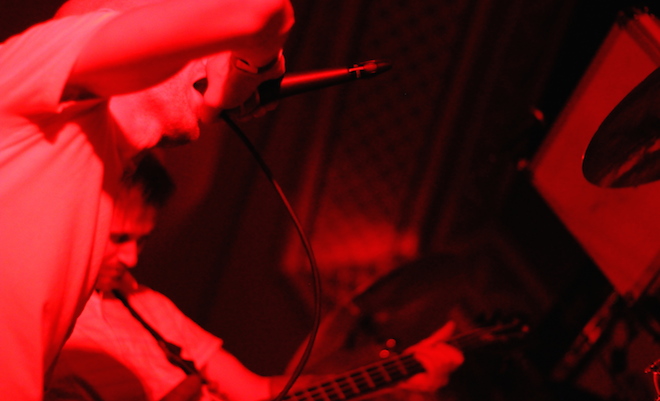 This year Gilead Media Festival reconvened, demonstrating a continued unstoppable dedication to the underground musical arts. The unique threads of sound Gilead Media has continued to support means whenever this gathering is held, it should not be missed.

Two years following the original supposed one-off assembly, another festival has come and gone with even greater success. This time larger, one might argue more ‘official’, again seizing Adam Bartlett’s drive and transforming Oshkosh into a beacon for sincere, impassioned music and generous minds.

I couldn’t have been happier to attend again. Even having just attended our province’s own DIY dream-festival for fastcore, I was considerably stoked to recapture the feelings of the first Oshkosh-based festival, as difficult as that would be. Despite the bus rides, being sick, flights, airports, and a significant pain in my wallet, the three days I spent in Wisconsin were well worth it.

Rewarding describes the festival quite well. A lot of genuine people from far and wide to share in the fruits of time, patience, and inspiration. The united efforts and passions in gatherings like this and Fastcore Festival is inspiring. Nothing has died or capitulated in underground music. Hard working and motivated people continue to build great communities, and this is one example I hope to see repeated and replicated.

This will be the first of three articles (one for each day) combing over the minutia of the second Gilead Media Festival. While there was no resurrection of A Scanner Darkly this year, the tone and activity surrounding this three day event was no less enthusiastic and positive. This carried on throughout the three days and infused each set, the various conversations with band members and internet personalities, and friends.

The showcase of artists is always promising; the combined knowledge and experience behind the organization of Gilead Media fest means you’re going to enjoy the music.

You will see it, even if you’re drinking in the hall outside the main stage area; you get a good view from the doors and side stage. You will hear it, even if on the front steps in the sun, the sound billows smoothly into your ears, especially in the case of doom bringers like Loss, Wolvserpent and Sea of Bones. It was inescapable.

Curated by many branches of the Gilead musical warren, headed by Adam Bartlett and his friends and family, it was once again a very special meeting of talents and minds. If you went, you felt the welcoming; I did and was very tempted to spend a lot of time looking through merch and records. Halo of Flies, Gilead Media of course, Blindrune Recordings with Nordvis, Badhuman Records, Natvres Mortes Illvstration, Hell’s and Eternal Warfare-ish blend of merch and similarly The Body and Thou set up all three days, and a lot more. The setting was even more appropriately grand than the first festival, while barely traveling a block west from the original location. The one thing missing this year was a wedding on the ground floor. It was the Oshkosh Masonic Center that facilitated all the energy, sounds and atmospheres, and where the bands let loose some magnificent sets under cover, away from the sun.

Merchandise tables lined the outer walls, which were draped in red curtains to block out the already-boarded windows, though the heat meant some were left open. Throughout the days, a good portion were changed up depending on the line up. A few drinking areas, but none in the main venue – I don’t drink so it wasn’t a problem. There was seating near the stage out in the hall, but from what I witnessed, everyone was in the hall for the majority of performances.

I was at the front for most sets, a few exceptions for water and a sit down. Bands got on and off stage largely without a hitch (maybe one or two late/early finishers), only one PA was temporarily out of commission, and the free water was generous and appreciated. Here’s the order for the first day, starting later thus being shorter that the following two days:

Inter Arma was supposed to play but couldn’t make it, so the black metal band Anagnorisis filled in a did a good job at that. Below is footage and photos of the first day of Gilead Festival 2014. Chicago’s sludge wretches Oozing Wound brought a loud and lively battering of swampy sludge metal to open the festival’s first day. Had not heard of them until that night, but they were pretty good. Loud as fuck, as I said. I was really interested in what the Thou & The Body collab set would be like, if it would be mostly their recorded stuff or if anything special would be performed for the festival. Regardless of what you were expecting, it was heavy. A lot of people there had already seen them together on tour, but being of Canadian origin, I rarely get a chance to see either band live.

Watch below to get a glimpse. Next was Anagnorisis from Kentucky to bring a black metal storm in place of Inter Arma‘s absence, showing off their 2013 record Beyond All Light. Thirty minutes of symphonic darkness. Hell’s despondent grace was awesome this year. At the first festival they blew me away with their unveiling of their split with Thou, but I wished they had longer to indulge in their expansive songs. They did just that in 2014. You can view their mournful march below. Ash Borer closed out the first night, sounding better then the last time I saw them as well as having a long set. I’m not too keen on their most recent material, but they’re a great live show to see.

That was the end of the first night, certainly just a taste of what was to come. Later I heard there were some mad pool parties each evening in some of the hotels. I, however, went directly to bed on this first evening when things wrapped up, having no sleep from travel and all that. I was eager to have energy for the second day. Keep a watch out for part two covering day two’s showcase following this shortly. To view hi-resolution video and footage of this and other events visit the galleries and playlists of The Plow Behind You on Flickr and Youtube.