Sion Sono’s work is a great introduction to Japanese cinema for those who had no previous contact with it – indeed, hard to believe as it is, there are people in this world who never heard of masterpiece movies such as “Ran” or “Throne in Blood“. Some of them haven’t even seen the original “Ring“. While it is true that those people should seek professional help, let’s point out one thing: there is a reason why Japanese cinema seems so strange and crazy to us, people from the English-speaking part of the word. It’s not that the movies are made to be weird, at least not all of them. Sure, some are just supposed to mess with our heads, but to an Euro-American mind, even the simplest Japanese family drama can seem bizarre and eerie. The reason lies in our value system, so different from Asian morality in general, and Japanese morality in particular. The cultural differences shine through Japanese films and make us uneasy – that’s part of why these far eastern movies are so addictive. They’re like a gate to a different world. These people seem just like us, we think; but that’s just on the surface. Beneath the skin there’s a different species, and if you can learn to be moved by the stuff that moves them, and understand the movies in a sincere way – give yourself a round of applause.

Because of cultural differences around subjects such as life and death, sex and morality and so on, Japanese directors time and time again have brought the Western audiences to their knees. Here’s a list of the next five J-movies that have what it takes to pulverize your sanity and make you question everything. Everything. Edogawa Ranpo must have had a really twisted mind, or at least that might be your opinion of him after watching Rampo Noir, a film consisting of four segments, each based on one of his stories. This is the only movie I ever managed to actually make subtitles for, that’s how good I thought it was. Never again will I make subtitles, it’s the most boring thing to do, ever. The film features some of the more prominent Japanese actors, such as the great Tadanobu Asano and the unmistakable Ryuhei Matsuda as leads. These four stories are not connected, but each of them is supposed to give the viewer an impression of some kind of hell that the characters are going through. Expect really crazy image filters, strange shots and unforgettable moments such as erotic licking of a mute amputee, facemelting (literally) beauty queens, and the regular stalker limo driver. Pardon the collector of live body parts, watch this movie home alone with the lights out. Chances are you’ve heard of this film. Remember that feeling at the end of high school when you were kinda supposed to choose a college and a major, and decide what the hell you’re gonna do with your life? Remember going FUCK THAT, I just wanna stay here forever and never grow up? Sure you do, or at least you think you do from today’s perspective. This is what Blue Spring is about, and it’s a cult movie for a number of reasons. First of all, it tackles the insane problem of pointless, post-econobubble youth without any real future ahead of them. As it turns out, even though it’s known to be a phenomenon very deeply rooted in Japanese culture, we Westerners can relate as well. This film definitely is a spirit-crushing experience very much in the vein of Sion Sono’s films. I suppose it’s even one of those movies that can drive you to suicide. It also features a soundtrack by THEE MICHELLE GUN ELEPHANT, one of Japan’s most cvltest garage rocking blues bands ever. Yusuke Chiba was in that band, I rest my case. If you don’t know who that is I hope you get a midnight visit from a hungry grizzly bear. Seriously though. If you’re still in your twenties, this movie will talk to you in a different way than it would in your thirties. A definitive must watch for anyone who had thoughts of going against the mainstream of becoming an “adult”. All About Lily Chou-Chou

I don’t know where to start talking about this movie, because nothing I can think of would do it justice. It’s a masterpiece about alienation, growing up, anxiety and depression. It’s also about overcoming those things and failing to overcome them. It’s about anger and disappointment. And it’s about music and the unique power it has.  The movie is sheer beauty, and the message it carries is a very fragile one. Give yourself time to absorb this movie, you’ll most likely want to watch it at least twice. If a film can be life altering, this is it, dead on. Iwai’s films in general have been known for leaving the audience in a state of awe and frightened restlessness, and in this way can be compared to Darren Aronofsky’s epic works. Make no mistake, the two directors are very much different, but if I tell you that this movie will drill a hole in your heart the same way Aronofsky’s The Wrestler did, you’ll know what I mean.  You should be afraid of this movie if you’re not sure about your current life. Takashi Miike is known for two things: insane, over the top violence in his yakuza films, and ridiculous comedy. It you look past the guts and the blood, you’ll see that the man is also a genius of subtle messages and actual filmmaker finesse. Ichi The Killer is a film with a very simple plot, but it grips the viewer, not to let go until the credits roll. Most of this effect is achieved by the charismatic and interesting Kakihara, portrayed by Tadanobu Asano, who was literally born to take this role. This movie has it all: glorious splatterhouse blood bath extravaganza, amazingly dressed gokudos running around downtown areas, fantastic shrimp fried torture, and more. It’s possible that this movie will be the easiest to find from the bunch for you North-American viewers – it was definitely part of that Tartan Asia Extreme release series. That is, of course, if you’re not a fan of the torrential downpour blues, if you know what I’m sayin, mayn. I’m not even gonna say shit. This is the most crushing movie I’ve ever seen, and you really need to watch it. One day I just felt like watching a sad movie, so I texted a friend to recommend one. She just replied with, “Doruzu, Kitano”. There was no way I could have expected the horror. I couldn’t fucking gather myself for a month after watching this film, and that’s the best recommendation I can give, all other words are unnecessary. Do not read what it’s about, do not watch the fucking trailer – just sit down, shut up, and watch it. 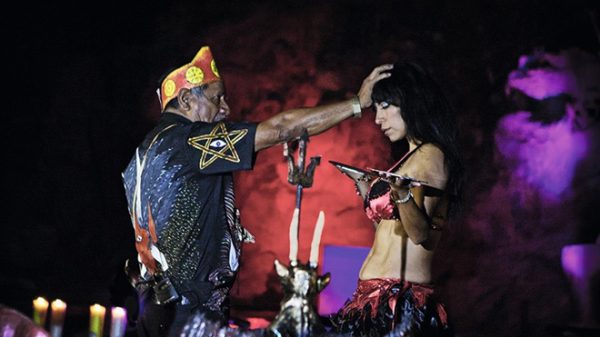