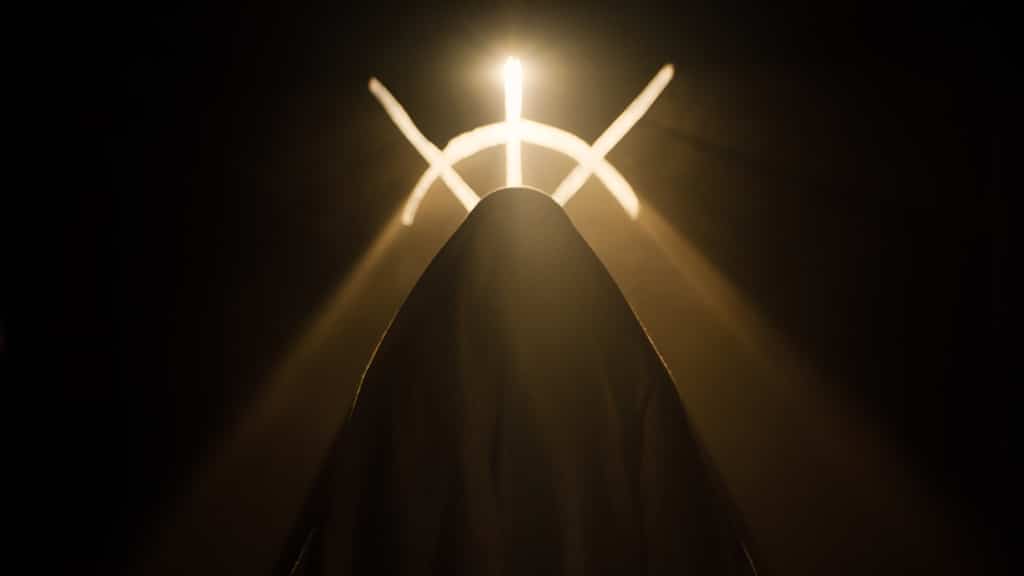 How often do we look outside ourselves for horror and suspense because we’re trying to ignore the horror and suspense within our own bloodlines? The shame, the blame, the rage, and the fear that’s been handed down from one generation to the next, until we stop and see it held in our hands before we pass it to the next in line. Many of us are forced to look because our sick minds and bodies demand to know what’s at the root of our illness. Many of us never even look because we don’t want to see it.

In The Shadow Of God, the new horror film from director Brian Sepanzyk (Compulsion) and composer Nick Yacyshyn (Sumac, Baptists), deals with that understanding of the trauma we’ve received from our parents and grandparents. It stars Sara Canning (Vampire Diaries, War For The Planet Of The Apes) and Adam Lolacher (The 100), and the stunning cinematography and powerful soundtrack look like they’re gonna traumatize some people. The music will no doubt be amazing, since Yacyshyn’s Compulsion soundtrack got a cassette release via Sige Records.

In The Shadow Of God will premiere at the Portland Horror Film Festival on Friday, July 1st — get tickets and streaming info here. They’re also doing a hometown screening at the Rio Theater in Vancouver, BC on July 16th from 12-2 pm, with tickets at the door.

In The Shadow Of God is an intense supernatural horror story that was shot in the Pacific Northwest. It’s a film that deals with generational trauma and how we cope with what was passed down to us.

This was another passion project that was pulled together by the help of an amazing cast, crew and friends over the pandemic. We shot up on the Sunshine Coast for 5 days where all stayed with one another and just worked on this film. It was an immense amount of work but was also an incredible experience, and we couldn’t be happier with the end result. This film is a showcase for our larger concept that we hope to find financing for so that we can tell the full story in a bigger capacity.