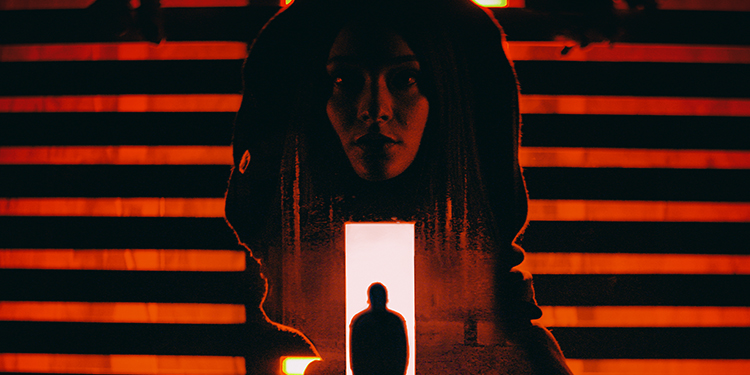 If there’s one thing we’ve discovered by moving CVLT Nation up to the grey mists and green forests of Vancouver, it’s that there is a LOT of underground talent in this city. So what happens when buddies who also happen to make sick visual and musical art get together to create the ultimate slasher short film? COMPULSION happens. Brian Sepanzyk, visionary behind Baptists’ sick video for “Bloodmines” that we premiered here (as well as vocalist/guitars for Waingro), teamed up with Baptists/Sumac drummer Nick Yacyshyn to direct and score this stunner of a slasher. It stars another Baptists member, vocalist Andrew Drury, as a seriously sick fuck, and Eva Bourne (Beyond the Black Rainbow) as the target of his obsession. I’ve had the pleasure of watching this film from start to finish, and it is a highly impressive piece of audio visual magick. The soundtrack is perfect, wrapping its soundwaves around the viewer’s throat while the cinema pushes its bloody fingers deep into their pleading eye sockets. For now, we’re lucky to be premiering the official trailer, and here’s to many a successful festival showing! If you want to keep informed about future screenings of COMPULSION, make sure to follow their Facebook page here. Watch the trailer now and read what Sepanzyk has to say about the film below…

Nick and I wanted to do something that was a nod to old 80’s slashers but try and do it with a different perspective. We wanted to create something more bleak and realistic as we follow someone who is trying to deal with such violent impulses.

What was unique about this was I started writing the film around music that Nick had come up with. That gave me some cool visuals that I then wrote around to connect it all. After filming was wrapped, Nick and I then spent a couple months on the edit and then revisited the music to make it all flow afterwards. Sasha, our DP, came up with some really cool lighting designs that helps give it a unique style that I’m really stoked on.

I wrote the part for Andrew, who plays the lead. I knew him from his music, and anyone who has seen him can agree with me, he’s intense. But the character required more than just unrelenting rage, it also called for vulnerability which Andrew handled perfectly. He was amazing to work with. Next I set out to see if Eva Bourne would join the cast. Having seen her in one of my favorite movies ‘Beyond the Black Rainbow’, I had to get her involved somehow and couldn’t picture anyone else doing it. She agreed and gave it her all and she absolutely nailed it.