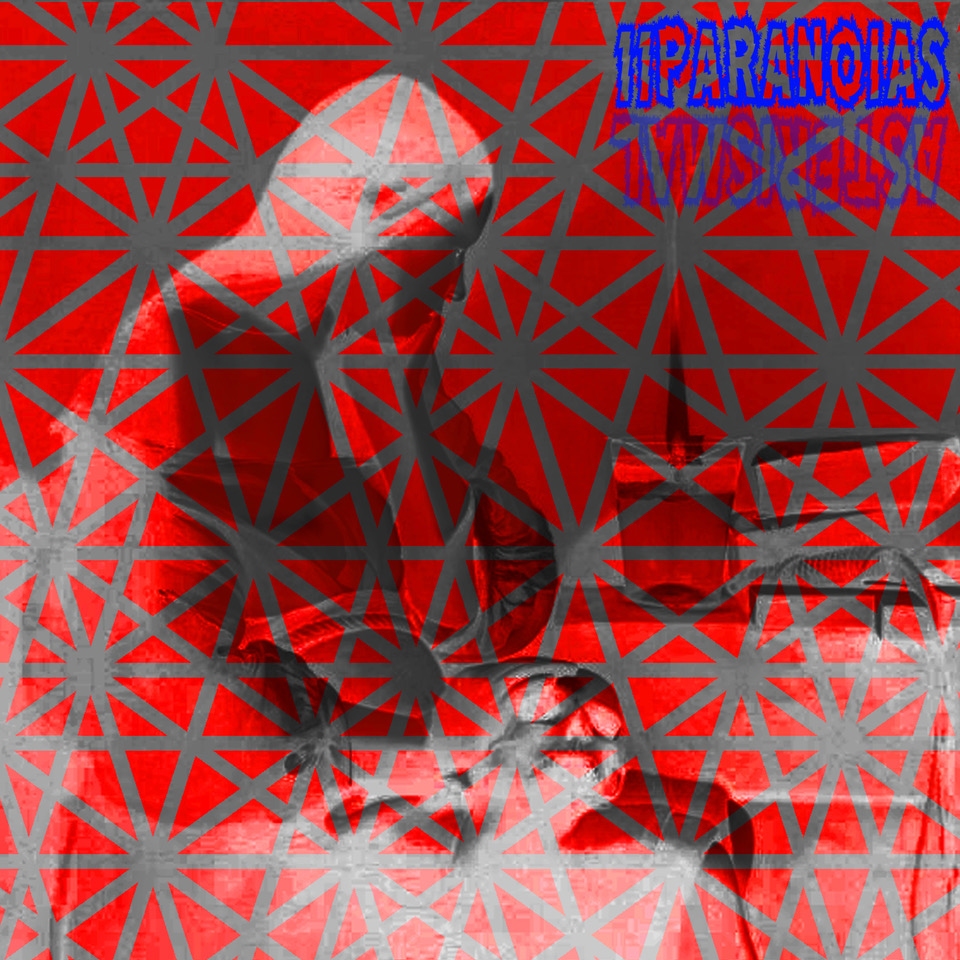 The new album from UK doom trio 11Paranoias is not so much an aural attack of the senses as an astrological one. Such is the trio’s fixation with the bigger picture that Asterismal develops into a truly immersive cosmic listening experience.

11Paranoias have been around for eight years and this is their fifth album and captures the progress that these underground extremists have made. Although the dirty bass lines is consistent with the doom pedigree that you would expect from a band that featured Electric Wizard’s Mark Greening amongst their original line-up, overall the colours are much more vivid this time around. On Asterismal 11Paranoias shuffle a few steps further towards a psychedelic head-spinning landscape.

The album opens with the pendulum pushing ‘Loss Portal’ which is a searing shot of bleakness into your subconscious, played at a hypnotically funereal pace with Nathan Perrier’s measured rhythm executed from behind his drum kit working alongside the fuzzed basslines of Adam Richardson, whose own distant vocals almost appear to be coming from the next room.

Guitarist Mike Vest eventually cuts loose from this slowly bubbling cauldron to test the boundaries with some more fevered riffwork although the track still largely operates within itself, essentially setting the parameters for what is to come.

The first glimpse through the psych portal arrives on the hirsute headbanger ‘Bloodless Crush’ on which the primal drumming from Perrier adds a distinctly old school feel. Once the full rush of rhythmic wizardry arrives the whole song spirals into a spellbinding concoction of jutting grooves, Richardson’s thin vocal threads almost taking on an Ian Curtis-like hue.

Asterismal seals a trilogy of albums from 11Paranoias, completing a weighty sonic stack for those who have already danced with the devil on Stealing Fire From Heaven and Reliquary For A Dreamed Of World. It also seals the experiment that saw the band place drums at the head of affairs on Heaven, and bass on Dreamed World, with lead guitar now given license to express itself fully on Asterismal.

It’s fair to say that the music of 11Paranoias is someway removed from any discernible song structures in the conventional sense. Tracks such as ‘Vitrified Galaxy’ are not so much sunny side up as Sunn O))) with extended drone passages reaching out into the ether. The sense of foreboding resonates even more strongly on the soft hum of ‘Prelude’ which leaves you hanging in the air as a single chord is repetitively engaged over a sonic vacuum.

The full force of 11Paranoias suddenly explodes on the much more expansive ‘Slow Moon’ on which the strokes are far broader, the reach more expansive and the peaks and troughs of the galactic groves more extreme. The tempo remains leviathan although the vocals are more visceral, hinting at greater urgency as the momentum builds, the heaviness beginning to feel utterly crushing.  The frantic final stages again conjure images of Joy Division at their most desperate, Curtis flailing like a drowning child.

The album features three immense compositions that break the 10 minute barrier. Although that’s not unheard of within the circles of doom that 11Paranoias inhabit, the sheer exhaustive tones applied on ‘Quantitative Immortalities’ makes for an uncompromising listen. The power is simply relentless, and the weight presses down on you with such frightening force to render any potential escape routes unattainable. The repetition builds inexorably towards a cosmic collision course with the listener caught in the perilous position of being at its very epicentre.

On ‘Acoustic Mirror’ the darkness envelopes everything as the light is sucked out of the equation through a piercing drone that slowly gets into your head and torments your mind. At the same time you can’t pull yourself away from this transcendental force as the immersive spirits of darkness work their black magic before finally petering out only to return almost immediately under the guise of ‘Acoustic Mirror II’.

This time 11 Paranoias ratchet things up further with a sprawling decadent 15 minute sojourn that nullifies all rational reasoning and empties your brain of all conventional thought against a meandering echoing line of dissonant grooves. The bass is swung so low it comes with its own trip hazard warning light as the album meanders through the hour mark, by the end of which medical intervention to restore a semblance of humanity to your being may be advisable. As for your soul… there are some things even modern medicine can’t fix. By now 11Paranoias have decimated it.

In this article:doom, Paul Castles