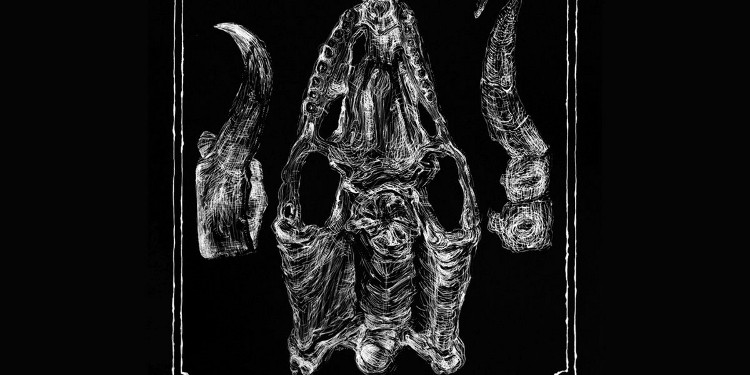 Welp, what do we have here? Talk about WEIRD and fucked in the head shit, it doesn’t get weirder or more fucked than this.  But let’s let the band do the talking and introduce themselves in their own words:

This is our first four track demo, named ‘Thecodontia’ via the Norwegian extreme metal label Gravplass Propaganda (which has also released Oksennus, Eggs of Gomorrh, Engulfed, Spektral Hatchery and Kult Mogil). Our main inspirations are bands like Antediluvian, Revenge, Celtic Frost, Ride For Revenge and Teitanblood. No guitars are used in our music, only distorted bass, drums and vocals, all the bass parts are played with fingers and no picks have been used during the recording. Aesthetically and lyrically we focus on prehistoric creatures, fossils, dinosaurs and geologic periods and we try to convey these concepts through music itself too, in fact we call our music style “Prehistoric Metal of War” (!!!!!). Every track on the demo describes a different genus of thecodont (which were reptiles similar to crocodiles and dinosaurs’ ancestors). Mixing, mastering and programming has been done by Francesco Comerci from Helslave and our logo has been drawn by Andrew Cunningham from Malthusian and Wreck of the Hesperus. The artwork has been drawn by Giulia Ajmone-Cat and it’s based on real thecodont bones.

Well, shiiiiiiit then…. If that isn’t some fucking next level nerd shit. But hey, we wouldn’t be here even talking about this demo if not for the fact that it absolutely fucking rips. I can’t help myself but exclaim to the utter craziness and unhinged madness of this thing. Literally not a single fuck was given by these two weirdos in worshipping at their own personal altar of total black/death annihilation.  Thecodontion‘s is simply some of the most personal, out there, crazy shit I’ve had the pleasure to witness in extreme metal in a long ass time. Press play and witness for yourself, and make sure to support these two Italian war metal dorks any way you can – they deserve every single ounce of it for having envisioned something so personal, weird, and un-trendy.