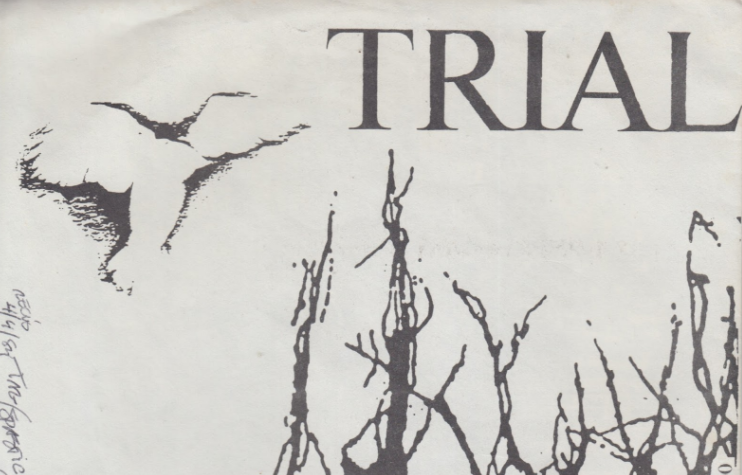 CVLT Nation is beyond stoked that the unreal site Terminal Sound Nuisance has allowed us to share some of their very thought-provoking features. What makes this so special level is that he is writing about a history that I was a part of and that changed my life. SoCal played an important part in what we know as hardcore punk, but NorCal (somewhat SoCal) played a major role in Peace Punk stateside. Read part one of Terminal Sound Nuisance’s California Screamin’ (part 1): Trial “S/t” Ep, 1983.

Fuck me, it is 2018 already and, after dealing with the traditional bad news and exchanging the usual phony wishes that the new year invariably brings, it is high time I get to work again with a brand new series about a genre that is particularly dear to my soft heart: peacepunk.

My faithful readers know full well that I have already raved about peacepunk bands or about their legatees on several occasions in the past (The Iconoclast, Another Destructive System, Glycine Max or Diatribe have already been invited on Terminal Sound Nuisance among others) but I have never done an actual series on the subject. To be honest, the enterprise is tricky for several reasons. First, 80’s bands associated to peacepunk are not very well documented, if at all in some cases, so that writing about them proves difficult and potentially foolhardy. Second, the very concept of “peacepunk” can seem problematic in itself and must be imperatively read and understood in the specific context of its birth, namely California and its different punk creative centers. As I touched upon in the post about Iconoclast, to be a “peacepunk” band or to identify as one was apparently a matter of some importance or even a bone of contention in the 80’s. This probably had a lot to do with the nature of the Californian punk scenes that had so many punk tribes, and sometimes antagonistic ones too, that you could basically choose your own punk subscene inside the larger punk scene. It could also be argued that the highly political nature of peacepunk bands, their vocal dedication to serious causes and their overt pacifism was not to everyone’s taste and that tribal rivalries must have occurred (maybe not unlike the tensions that emerged in the UK with the rise of anarchopunk), hence the “peacepunk question” sounding somewhat crucial.

Why peacepunk thrived so proliferously in the Bay Area and Southern California is open to argument and discussion and I am certainly not familiar enough with the broader Californian punk scenes to be able to emit a definitive judgement. Undeniably, peacepunk bands were deeply influenced by Crass and the anarchopunk politics (feminism, animal rights, militant pacifism and so on) and aesthetics (bloody doves everywhere mate) and by Discharge’s radical and raw antiwar stance to an extent that had few – if any – equivalents in the world. Perhaps the liberal political tradition of San Francisco (the parallels with the politics of the hippie movement are relevant) was a key factor and, as Stuart from Shit-Fi suggested in his review of Diatribe, perhaps the social conditions in SoCal experienced by young punks made the anger of Discharge and the serious stance of Crass relevant. Or perhaps, they just all wanted to wear black clothes and charged hair and that peacepunk was basically the only available punk option back then. For the sake of defining (and we just love our definitions steady, don’t we?) let’s assume in the context of this series that peacepunk was a successful and inspiring adaptation (in other terms, not a copy but an actualisation) of British anarchopunk in Californian contexts. The first part of California Screamin’ (yes I know it is  the name of a roller coaster but it actually changed its name to Incredicoaster – sigh – on January, 8th, so basically I am now legally entitled to use the name, right?) will focus on a first generation peacepunk band from San Francisco, Trial – no, not the 90’s SxE band, where do you think you are? SF Trial formed in 1982, when the band members were still spotty teenagers, and split up in 1987 (I think?), releasing this self-titled Ep in 1983 and the Moments of Collapse Lp in 1986 in the meantime. Interestingly, the brother of Trial’s singer John, was Matt, the bass player from Crucifix, and their sister was Sarah, Atrocity’s singer (family dinners at the Borruso’s must have been so fun). In actual facts, there were more connections between Crucifix and Trial: Chris, the original drummer of the former played on the latter’s album; guitar player Jake recorded the Trial Ep; Freak Records (run by Crucifix if I understand well) released the aforementioned Ep as well as Crucifix’ Nineteen Eighty-Four Ep; and of course the bands often played together. On the broader scale, Crucifix were completely instrumental in the making of the peacepunk scene and their overarching influence (on a musical, visual or lyrical level) cannot be overestimated. They played a major role in the development of the scene and certainly inspired the early generation of peacepunk bands like Treason, Against, A State of Mind or Peace Love Happiness (yes, it is a real band) to get involved.

There was no common point between Trial and Crucifix musically however. Where Crucifix were blending US hardcore energy with Discharge relentlessness, Trial were a moodier bunch that does not fail to remind one of vintage British anarchopunk bands of the same time. Beside John on vocals, the band was made up of Desmond on the bass (he actually also contributed to an early version of Faith No More, as did Jake Crucifix), Rip on the guitar (he also played in A State of Mind) and Jason on the drums. If there were any justice in this world, this Ep would be considered an absolute classic of US anarchopunk and one of peacepunk’s most memorable moments of brilliance and I would be invited to do conferences all over the world (I am pretty cheap too, just an alright couch and a bag of crisps). There were not that many mid-paced, dark anarcho acts in the States in the 80’s, or rather, not many that would fit today’s definition of a “mid-paced, dark anarcho band”, and seeing that there are a lot of current US bands purportedly playing “dark anarchopostpunk”, one would have thought that a band like Trial would have benefited retroactively from this resurgence. But no. What a strange world… Musically, we are deep in the moodiness that characterized the most somber shores of the UK anarchopunk territories and I am strongly reminded of bands like Reality Control, Blood Robots or Alternative, with a distinctly darker tone reminiscent of Rudi Peni, The Mob or Part 1. Not exactly joyful, I’ll give you that, but extremely catchy. The mid-paced “Inborn system” has a morose and melancholy tuneful tone – almost macabre yet danceable – that works very well and may also point in the deathrock direction (which would make sense for a Californian band), “From the sky…” is faster with the typical anarcho tribal beat and sounds like the perfect cross between Omega Tribe and Vex (but with an American accent), and finally “Is this to be?” (Discharge reference?) is a slow, haunting number with surf-like guitar and a demented atmosphere that would fit nicely on a 13th Chime record. The bass lines are melodic, driving and aptly somber, the guitar is scratchy and dark as expected, the drumming is solid and tasteful and the vocals are neither quite sung nor quite spoken, conferring the song a spontaneous feel of brooding despair and righteous teenage outrage, aka on the proverbial punk edge. This is a brilliant Ep and a rare occurrence of an 80’s American band going for the typical UK sound of The Mob, Zounds and all (The Apostates also come to mind but they were a later band). Pretty unique if you ask me. The aesthetics of the record itself are ripe with peacepunk symbols and slogans, so much so that you could pretty much play a Crass-themed bingo (the band came up with the awesome logo depicting a peace symbol turned into a ticking clock). From the dove on the cover (for some shite reason, the former owner scribbled something next to it…) to the adamant anti-military booklet provided with the Ep, the poignant pacifist imagery, the gruesome war pictures, the countless slogans on the whole foldout cover, the long poem of self-liberation… “I question, thereby I avoid their grasp. I seek freedom, thereby I escape the ignorance which I am told is reality.” There is a lot to read on this one and there are tiny details you will probably not catch the first time around. While some of it is naive and idealistic, I do appreciate the honesty, the sincerity and the vulnerability permeating it all and how the visual aspect of the record and the political content it conveys are as important and relevant as the music (this notion of “music as artistic militancy” was central to peacepunk). Apparently, Trial’s live performances were enhanced with visual components such as banners, slideshows, film loops and so forth which gave a dark apocalyptic atmosphere to the experience (and probably distracted the audience from the musical fuck-ups too).
Following this Ep, Trial released the Moments of Collapse Lp in 1986 with Carolyn (formerly in Treason, A State of Mind and Sleeping Dogs) on the guitar, an excellent and inventive postpunk/goth album full of introspective politics and dark tunes that is worth your while. Certainly different from the Ep but definitely a solid record. So… Who’s up for a Trial discography? There must be some demo recordings somewhere, right?
In this article:anarcho, ANARCHO POST PUNK, Trial 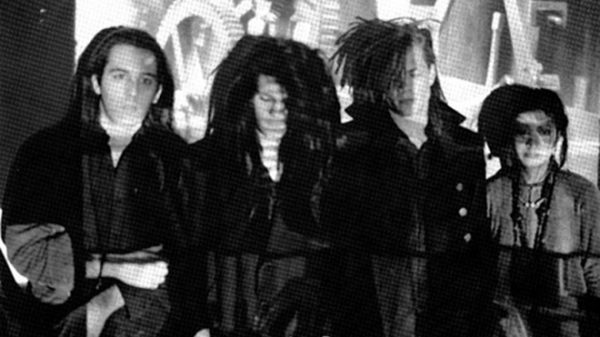 By Sascha via Behold The Blessed Wax Trial – Moments Of Collapse LP, 1986 This is not a write-up about the Straight Edge Band... 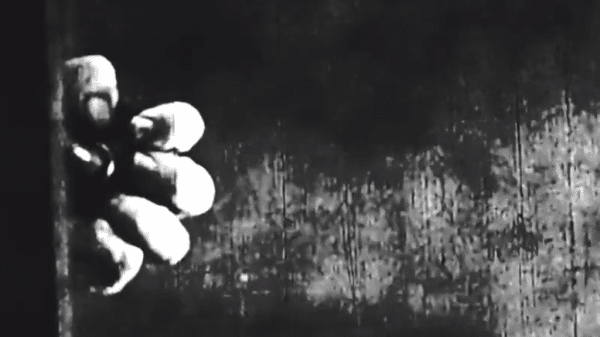 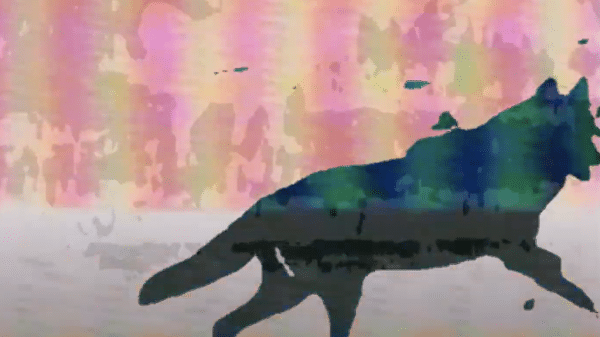 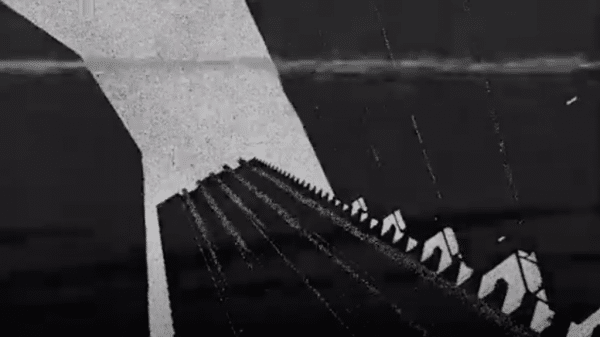