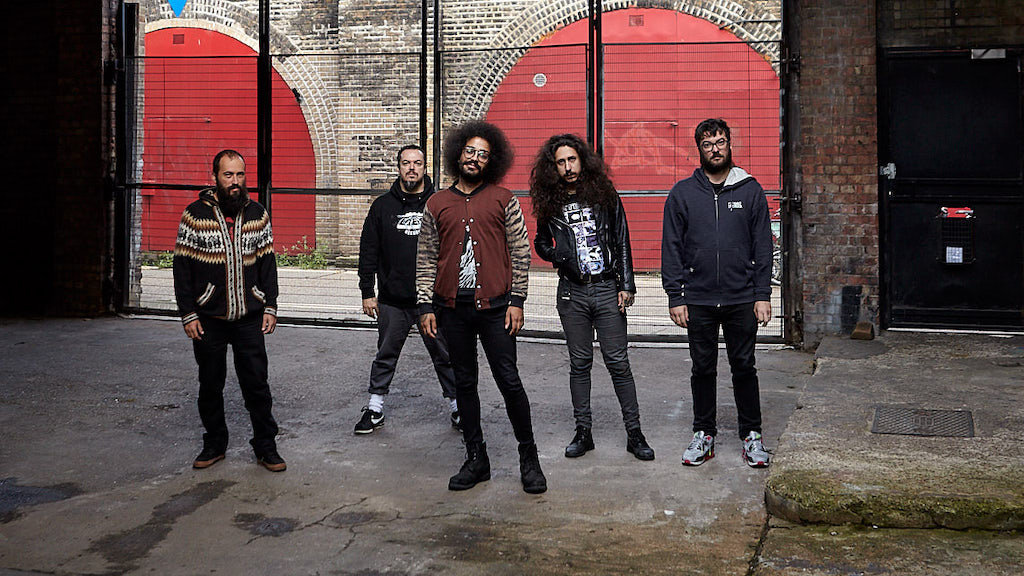 Petbrick is duo Igorr Cavalera and Wayne Adams, and they make music that is almost pure noise, synth-driven sonic soundscapes that tickle your ears even as it threatens insanity. Deafkids is a Brazilian three-piece that mixes raw punk with acid-infused percussion and chanting. These two forces decided to join hands and make an album together and yes, it is as fucked-up as you already think it is, and more.

Some tracks, like “Primeval I,” are simply atmospheric, deadly and sinister, snaking their way into your ears and down your spines, making your legs dance whether they want to or not. These tracks set the stage, get the psyche ready for what is to come and what you are swallowing. Hypnotic is a good word for them, but they are more deadly than that, seeing as they actively engage the listener to move beyond passive acceptance into insidious participation. Then you get tracks like “Forca Bruta,” which simply feel like you’re being shotgun-blasted in the skull over and over again. This track just tears you open, gutting you with speedy, industrial shears, running you over and kicking your corpse. Mix all of this with some weirdo-synth mind-programming muck like “Maquina Obsseessivo-Compulsiva” and you’ve entered a different headspace altogether. Tribal, computeristic, growly, devilish, tracks like this shouldn’t exist on our mortal plane of existence. This is the language of the acid-gods, and each lash of their tongues brings you closer to madness, or deliverance. A seven-minute (!) cover of Discharge’s “Free Speech for the Dumb” completely eviscerates the original but somehow lovingly recreates it in a new, heftier, cybernetic version. This is noise-rock defined. “Primeval II” closes out the record with some mind-tripping rhythms and bizarre, echoing background voices whispering sordid truths (or lies; who can tell at this point?).

DeafBrick is a unique aural experience and I’ll give it to the guys: there’s nothing quite like it on this planet. Their collaboration brings out the best in both bands and tends to temper any of their individual excesses. This is a focused, intelligent record of noise, industrial, metal, and punk. This is the most original album I’ve heard all year but it is definitely not one of the most pleasant. There’s an element here, one of deprogramming, or maybe it’s programming, but you can feel your brain bleed in certain parts, like the band is issuing forth sounds that are breaking down mental barriers you never knew existed. This isn’t dangerous, but it is singular, and once you allow yourself to delve into its depths, you won’t come out the same person.

Check out our interview with DEAFBRICK here:

Talk to us about the influence Discharge had on y’all growing up, and who’s idea was it to cover “Free Speech”?

Iggor: Discharge is the DNA of the heaviest music made on earth… I remember having a cassette of Hear nothing and playing it on my boombox until the tape disintegrated…. I think it was my idea…  I’m really good friends with Bones and JJ (Discharge) so I asked them to record a voice message on my phone saying how much they hated our version; you can hear that in the end of the track.

Mariano: Being a D-Beat-infused band ourselves, Discharge is a main influence. The idea of something as raw as WHY? sounding as crude as it sounded ‘groovy’ somehow is something that sticks, you know?

When we lived together we had this neat Discharge album-inlay poster hanging on our wall, watching us every day haha. It’s just one of those bands whose influence can be felt from Ministry to SSD, with many things in between.

I guess it was Iggor’s idea, and he didn’t know about Metallica’s version! I think it’s the perfect band to sum all the characteristics that unite our bands together, sounding warm and cold, groovy and mechanic at the same time.

Marcelo: Discharge is one of my favorite punk bands ever! When I first listened to them I was shocked by the beats, timbres, and heaviness, so their music and aesthetics became a big influence for me. It’s also a huge influence on Deafkids’ music!

If y’all had to describe the Deafbrick album in terms of a mind-altering substance, what would you name it and what would the effects be on the human conscious?

Iggor: A drug named “Tijolo Surdo” only found when your brain is cracked open to endless dimensions.

Douglas: I would say something like a good LSD. The effects would be something like euphoria and hyper-excitement, synesthesia, and psychedelic visions of a near future. An inner journey where the being-machine that lives within us is found in the reflection of the inverted mirror.

Marcelo: It would call something like “another-dimension-electronic-organic-weed” and it would teleport you to a huge cosmic sound system.

What are your top three psychedelic bands of all time?

What impact have African and indigenous cultures – from food to music to spirituality – had on y’all and on Brazil itself?

Iggor: I have been extremely lucky to be exposed to both cultures from the day I was born, and you can definitely hear it on my drumming, and on my stomach.

Douglas: Although unfortunately the whole history of “progress” in Brazil is based on the cruelty of exploitation, erasure and genocide of these cultures – and this is undeniable as being one of the last countries to abolish slavery and with one of the largest numbers in the world of blacks killed by policemen, indigenous leaders being murdered and indigenous lands being constantly invaded and attacked as some examples – it is evident that here both cultures are rooted and alive in this melting pot of miscegenation that is affirming and denying itself at the same time.

For me, Brazil works through the filters and matrices of the “Culture of Exploration”, which means that the taboos of white Christian patriarchal morality are extremely rooted in the modus operandi of society as a whole, and there are power structures for maintaining this established sovereignty against these other socio-cultural manifestations and ways of life. In my opinion, of all the ramifications we have of what can be said for Brazilian music at its root comes from African, Indigenous or the meeting of both with European matrices. It’s all about the rhythm in harmony with the pulses of life.

Regarding spirituality, I myself found that there’s a lot to learn and absorb from the spiritual side of these cultures, which are strictly connected with the power of music and vice-versa. Here we have religions of African origin such as Umbanda and Candomblé, which are very rich and inspiring manifestations of the wisdom of symbols of nature and the human consciousness that uses music to guide the trance as a path of communion with entities and ancestral wisdom, and it has a great spiritual role in communities, especially in the most peripheral ones, and also had a strong impact on Brazilian music, where you can find a wide variety of this spiritual influence in records and tributes to the orixás by great names in Brazilian music, and also the unfolding of it’s percussive rhythms – such as Funk Carioca, whose main characteristic is the beat, which is completely based on a rhythm of candomblé.

For me, the wisdom, the cosmogony and the “philosophy” of the indigenous peoples of Brazil are extremely beautiful and inspiring, carrying the strength of warriors and the serenity of a simple life, like a big slap in the face of the white man and our human-production-product capitalist lifestyle from the big cities. Unfortunately, as I said, there is an intended erasure and isolation of this culture, which distances us from getting into “real contact” in a good way, although it has been taking on more proportion with the spread of ayahuasca rituals, for example (whether positive or negative is not for me to say, I guess). For me they are like guardians of the spirits of the forest and nature, carrying this wisdom and traditions about the connection with the whole, natural medicines and etc from time immemorial. I recommend David Kopenawa’s book “The Falling Sky – Words of a Yanomami Shaman”.

It is very sad to think that these very rich cultures and it’s people have to live under constant attack from blind hatred and ignorance from a population that unfortunately is manipulated and fragmented by those who want to turn us against ourselves, our history and our true roots for evil interests that we cannot even conceive of. It’s just evident that we as human beings have a lot to learn with the deep wisdom and the history of strength and resistance of these cultures.

Talk to us about the White Supremacy and Racism that has a hold on Brazil in 2020. How do you feel that music can be used as a weapon of mass change?

Iggor: I rather have my brothers in Deafkids answer that, even if I have some of my kids and my mom living in Brazil. They can be more accurate.

Mariano: Down here, structural racism and white supremacy are way more intertwined onto our culture than most places, to an extent where people are actively in denial about such issues.

We see a large increase in hate speech, but with a different narrative as in U.S., as an example.

We are a country rooted in colonial trauma… this generates a society based on resentment. People tend to hold deluded views on their position in society – poor people seeing themselves as middle class, middle class people thinking they’re rich, and so on. Most people who voted for Bolsonaro are actually the same people who’re affected by his policies.

There’s a certain sense of vigilance towards other people’s lives and a big resentment toward the social security structures that might benefit people in need and minorities (in terms of rights, not numerically speaking). This is reinforced by propaganda spread by fake news outlets, supportive of the current regime, backed by companies whose owners share the same anti-poor views.

The fact that ethnicity and wealth are so strongly connected is hardly seen as an issue by the people who are not subjected to the same treatment poor and black people receive. We’re more than half of the population, still relegated to a very specific position in society.

Music can be used as a tool for shedding light toward issues like that, but it must be accompanied by action and a broader social construct, otherwise it’s just words – especially in troublesome times like these.

Describe the feeling of Petbrick and Deafkids meeting each other for the first time?

Iggor: I was like seeing a reflection of myself in different bodies. Nothing but love.

Douglas: That feeling of musical communion where you feel a strong connection with these really nice folks trough subtle energies that transcends space and time. Nothing but love!

Marcelo: It was awesome, like meeting old friends! I consider Petbrick like a brother/sister band to Deafkids. 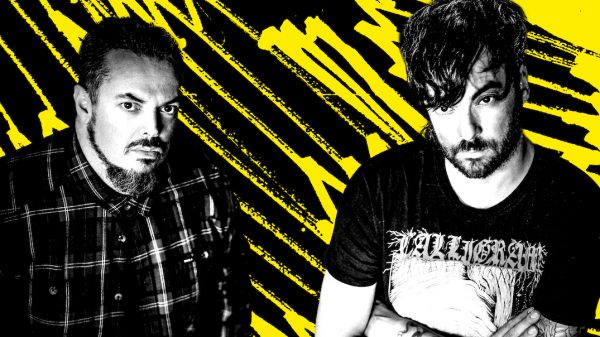