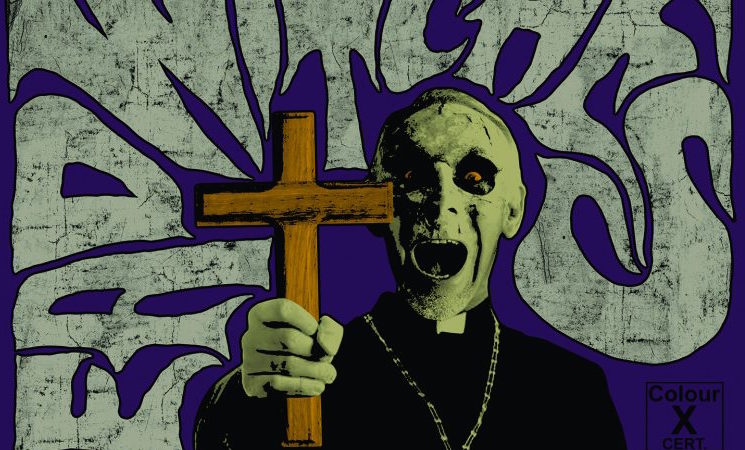 Dead Witches were in no mood to gamble when embarking on the recording of their new album. To ensure they captured just the right measure of Hammer Horror and goth suspense they headed to the bewitching woodlands of the New Forest in deepest Dorset, even taking additional care when booking the studio to ensure a cosmic collision with a full moon. The trick seems to have worked, engendering The Final Exorcism with just the desired sense of dread topped up with layers of fuzz applied with the same reckless abandon as if shoveling marmalade onto toast.

With everything tuned grasscutter low, the UK extremists enter the realms previously harboured by the UK’s heralded doom titans Electric Wizard. Maintaining the parallels, although possibly crop circles would be more in keeping with the darkly layered grooves, The Final Exorcism was actually recorded at Chuckalumba Studio from where Electric Wizard unleashed such seminal doom works as Dopethrone and Let Us Prey. Dead Witches even acquired the services of Doug Shearer who mastered Electric Wizard’s Chuckalumba classics to help ensure some authentic analogue agitation.

That Electric Wizard should provide the perfection punctuation point for Dead Witches is inescapable with Wizard founder Mark Greening responsible for the creation of Dead Witches two years ago. But while the spellbinding debut full length Ouija was a commanding start for Dead Witches, the follow-up has seen the band respond to two significant losses. The most painful was that of guitarist Greg Elk who died in late 2016 after Ouija had been recorded although prior to its actual release in early 2017. Finding someone with qualities and feel to replace Greg was a challenge but one Greening rose to when bringing Oliver Irongiant into the ranks. The band’s new heavily-inked axe administrator is a distinctive and familiar figure for those with their ears to the UK doom scene, Irongiant instantly recognisable through his association with Grave Lines and the indefatigable Sea Bastard among others.

The other necessary appointment was that of Soozi Chameleone (Satlan) taking over vocals from Virginia Monti, who has opted to pour all her energies into Psychedelic Witchcraft. Soozi has picked up the baton seamlessly and quickly makes her presence felt on the album’s title track and ‘Goddess of the Night’.

Greening takes the mic on the melancholic breaker ‘When The Dead See The Sun,’ but this brief luxurious lament is quickly eclipsed by the demonic ‘The Church By The Sea,’ on which Carl Geary’s shuddering bass provides the perfect launchpad for Soozi’s schmoozing vocals. Soozi, formerly of Killing Man Jaroh, shows her full vocal range on the likes of ‘Lay, Demon’, languid one moment then more tormented the next as the misery spreads slowly like a contagion. While similar to acclaimed doom artists such as Alunah and Windhand, the psychedelic bar is raised just a shade higher with Dead Witches.

Closing number ‘Fear the Priest’ is the album’s longest track, a gruelling journey in which you are caught in the crossfire of demonic possession and gargantuan riffs. As with Ouija, The Final Exorcism finds a natural home in Heavy Psych Sounds and the London label have also just re-released the first album on vinyl, no doubt in expectation of the mournful momentum growing around Dead Witches with this sophomore release.

The Final Exorcism is released via Heavy Psych Sounds on February 22.

In this article:doom, Paul Castles