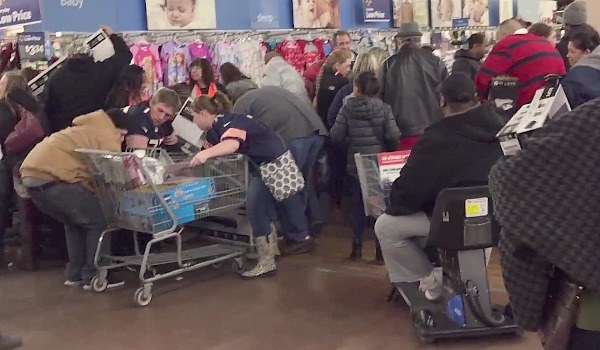 Rotterdam’s GOLD have put together a terrifying video together for their tune “And I Know Now” off their recent release No Image via Profound Lore and it doesn’t feature anything dark, creepy or bloody. Instead it’s a glimpse into the uniquely American phenomenon of the Black Friday Sale rampage. Like a herd of stampeding cattle, the giant suburbanite pours through the doors of Walmart, trampling everything in their path. Fighting for dashboard GPS units, TVs, Christmas toys and Blu-Ray players, they mercilessly pound each other in the name of Consumer Jesus. It’s scarier than any horror movie I’ve seen, simply because it’s an accurate reflection of reality. But on to the music – it’s dark, it’s heavy, but it’s also enchanting, and set to the nasty visuals, it allows me a little sigh of relief that the world I’ve created for myself is unknown to the buffoons on the screen. You can pick up No Image and listen to it in full on their Bandamp here. Let this video inspire you to make the world a better place – Trump and his homies watch this shit with dollar signs in their eyes. In this article:gold, no image, Profound Lore