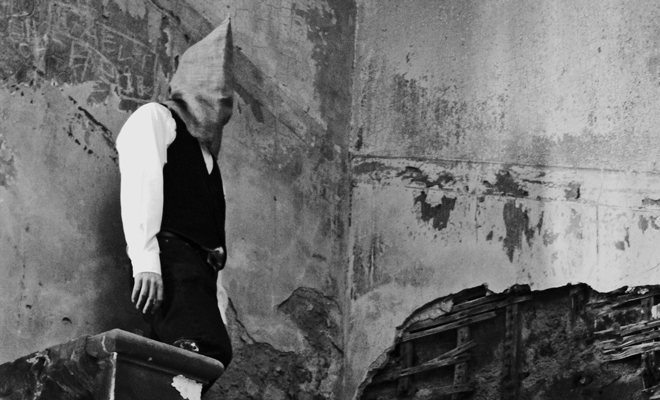 Filmmaker and animator Mark Rennie has just completed a visually arresting short film entitled PILGRIMAGE. The film is a character study of a haunting, inhuman figure, but more than that it is a study of the house it was filmed in, Scotland’s infamous Ury House. Once the northeastern headquarters of the Scottish Quakers, the current buildings of Ury House were built in 1885, but the estate has a history dating back to the 15th century as the home of lairds. Mark Rennie has made this estate the site of his own pilgrimage, and explains his attraction to it below:

The film became a testament to the building itself, something that was once beautiful and elegant, now has no roof, no floors, broken tiles fallen from the fireplaces of floors high above. Now only inhabited by the odd urban explorer and a flock of pigeons. I have returned to this building with friends numerous times since I discovered it, and it feels like the building is really a part of me now; I know my way around it like I know my way around my own home. Trees grow up through the middle of the rooms and old wallpaper peels from half-collapsed stairways.

Check out PILGRIMAGE as well as photos of the estate taken by Karolin Köster.

PILGRIMAGE from Mark Rennie on Vimeo.