This stop at Psycho Las Vegas won’t be your first United States appearance, but one of your first festival ones; are you excited to be playing to such a massively stacked festival crowd?

USA is always exciting. Especially for a little German band like ours. Our first US gig ever was a festival. Back in 2014, in Florida with the Melvins. After that, we played Maryland Deathfest, which was completely awesome. So, yeah, festivals are always fun as you run in to so may other bands you met all over the world, have beers and play to people who don’t know you yet. Only Las Vegas scares me. It’s one of the most fucked up places in the world, haha.

The festival is just one stop on your guys’ mini world tour that you’ve been on since April and will continue on and off until October; has being on the road in so many different places given you some pleasant experiences?

Of course. It’s a gift being able to see the whole world. But every band will tell you that it’s a bummer to have so little time for enjoying all of it. Even getting wasted every night is hard to do, as all this traveling and flying is so freakin’ exhausting. But as I said, we are very grateful. We will end this festival season, play a whole US tour with COBALT and then do another 4 weeks Europe run until xmas. Fucking hell. But the people seem to enjoy the band. So it’s mostly fun. After that, I can go back home, which nowadays is Florida. You have no idea how great it is to escape the fucked up weather in Germany – well, maybe you do. I don’t know. The fest has a few two-piece artists, which you are as well – does that dynamic work for you guys well on stage?

Yes. It does. It’s about the energy among the musicians and not about the amount of musicians. We do everything very raw and simple. Recording the same as we play live. No gimmicks. We both know each other as musicians so well that it’s easy to play together. You only have one other person you have to concentrate on. That makes things very intense. In a perfect and best case scenario, we totally get lost in our rage.

Does the two person dynamic help you write more efficiently or make it go by any faster because of how you work and bounce ideas off of each other?

Well, we only have two ingredients for our music:  a strong riff and a good drum beat. Best case scenario is we have both. So the songs themselves are very simple, anyhow. We want them to be that way. Raw, simple and aggressive. The writing process itself might be shorter due to that as well. If we figure out we did something good we get lost in the music and jam on one riff or beat for hours. Then we know it’s good enough to keep. Sometimes we improvise things while jamming, or I bring riffs to the rehearsals. Even though we actually never rehearse anymore, as we tour so much. We have certain times during a year where we just get together to create new music.

The two of you just recently got signed to Nuclear Blast, congratulations! Has this signing made you feel more of a sense of opportunity for different types of endeavors?

Of course, being on Nuclear Blast offers a lot of stuff we could not do before. Like shooting a video, or having someone paying for our super insanely expensive US visas for touring over here. Plus, of course they have very good in-house promotion and a lot of people all over the world have heard about the new record. All that rules, and makes things way easier. When we formed this band just a few years ago, our main goal was to put out a tape for friends and maybe play a show in our hometown. All the things that we experienced afterwards weren’t planned or forced. So it all developed in a very cool direction. To get the chance to fly around the world to play shows and selling some records is a gift. Can’t complain. But in general, we have a very strong DIY background and worked a lot for what we have these days. That’s for sure. So being on Blast didn’t change anything about WHAT we do and HOW we do things. They leave us pretty much alone and just put out the record. Well done.

Ode To The Flame was the first release on Nuclear Blast, how has the reception for it been?

From the fans? Pretty good, we sold a whole lot of records, I guess – at least way more than I ever thought would be possible to sell with this kind of music. We are surprised. Pretty much by anything. To have a label, to play all over the world to actually sell some records and merch. We are stoked. The press seem to like the record, too. I don’t read a whole lot to be honest, but from what I’ve heard they seem to like it. We had coverage in most mags in so many different countries, pretty cool. Thanks for all that. Thanks to you too for writing about this band. And thank you guys at CVLT Nation for your love for the new record.

A second record is always something that might make you a little nervous, as you don’t wanna change the band, but don’t wanna do the same record again either. Plus we had a whole lot of good things written about this band with the first record, so of course we wanted to keep up the good quality. We signed the deal AFTER we finished the record, to make sure nothing would have been put out that we don’t 100 % agree on. We try to keep control over the most things.

Has traveling so much after releasing given you any momentum to continue writing new material?

Well, the new record has only been out for 2 months :-). Haven’t written a whole lotta new stuff yet. Maybe when we have a break next year, I’ll see how I feel about writing new stuff. You know, we never make long term plans. We didn’t know if we ever would do a second record (like I said, the first one was supposed to just be a tape we would put our for friends!) and so we don’t know yet if we will ever make a third one. Time will tell.

Your music has some slower parts, definitely some deep notes, and some insanely heavy material, yet your Bandcamp says not to label you as ‘sludge.’ Is there any particular reason you’re not a fan of that term being used to describe your music?

To be honest, I don’t even really know what that is supposed to mean… Sludge? It sounds like an excuse for people who don’t know about their own musical roots. Do we play slow? Yes, sometimes. Do we play heavy? Hell yeah. Does that make me sludge? Whatever… Most bands I listen to that call THEMSELVES sludge pretty much all sound the same to me. Boring. They even have the same shirts.  Same artwork. It’s all just gimmicks and fashion. Doesn’t sound very tempting to me… But whatever. People need labels to justify their own liking of certain things, I guess. I prefer Dub music and classic Russian marches over so-called sludge. Who would you name as some of your influences that have driven you to make such a sinister and punchy style of music?

First of all, much more than certain other bands, it’s the joy and beauty of destruction and rage. There’s nothing better than pure sonic violence. I grew up on thrash metal and punk. Later, I discovered black metal. The real secret of MANTAR is to keep things simple and raw. To many gimmicks and possibilities make your overall sound weak. Though, AC/DC is the reason why I wanted to be in a band. No regrets.

The two of you hail from Hamburg/Bremen, Germany. Are there any bands locally that you think we should pay attention to?

Not one that would have any influence on us, I think. At least not nowadays. As we both grew up in Bremen, and were musically socialized in the wonderful 90s there, I’d rather call us a Bremen Band. I don’t know if you knew this, but in the 90s there were some great Bremen Bands that even became a little famous in the US. Acme, Systral, Mörser… all great, super heavy Bremen stuff. You know, the truth is I don’t go see many shows anymore. I don’t read music magazines, I just do my own thing. I like to stay away from any “scene” or whatever. It’s not something that draws my attention.  My musical inspiration doesn’t come from other bands at this point. Or at least not the urge to create and play music.

Mantar is playing at this year’s Psycho Las Vegas. 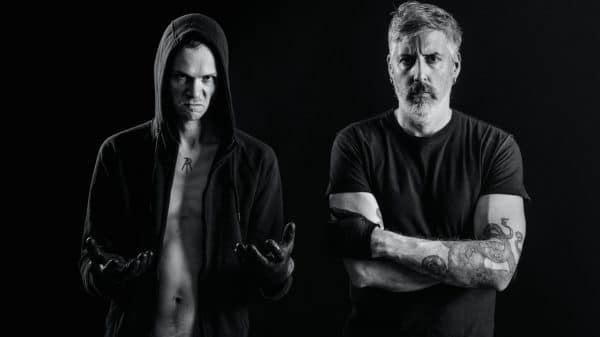