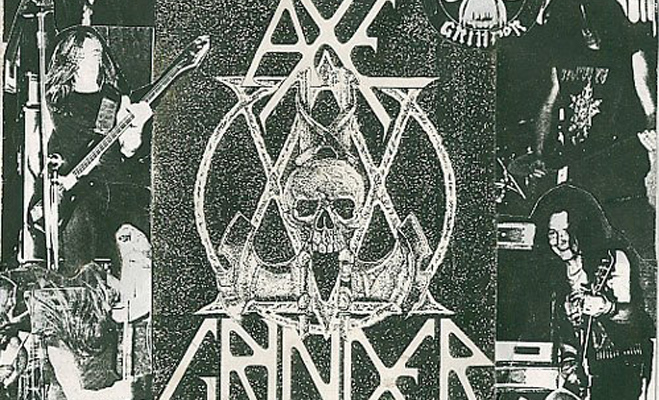 We all have nostalgia for old albums and bands that have disappeared over the years. Of course for some people, the music genre you like is much like a religion. So it can either be a real hatred, or a way to bond with a complete stranger. So if you can’t speak someone’s language, or just don’t really understand what the fuck they are talking about anyway, you can still smile and give a thumbs up when they talk about that mutual album you both love. So if you are visiting London, Berlin, New York, Tokyo etc and you meet someone with an Axegrinder patch, you can instantly strike up a conversation, and who knows, maybe even crash on their floor. A band like that gives you much more than just a record collection…

To be honest, I never knew too much about Axegrinder, I was only familiar with their music. So I thought it was high time I sent the lads an interview, which vocalist Trev answered. They called it a day 23 years ago, but their music has lasted the test of time. Their album The Rise Of The Serpent Men has been re-released time and time again.

After finishing the band Stone the Crowz and The Proudhons, was it a conscious decision to form a band playing in a more gloomy, metal-edged way and break away from the anarcho-punk trappings? Did you get much criticism playing more of a metal style while still involved in a DIY punk scene? What sort of stuff was influencing you at that point?

We formed Tyrants of Hate out of the ashes of those two bands, so it wasn’t a conscious effort to go in a metal-edged direction. TOH was basically a very noisy punk band with very little metal influences. At that point, we just wanted to make some noise that didn’t sound anything like our first bands.

The only criticism I got was from the drummer of Stone The Crowz, who quite rightly fronted me about splitting up Crowz because we were going in a metal direction, and then I end up in a band called Axegrinder!! Anti Sect, Amebix, Hellbastard, Deviated Instinct and Anti System were already doing the metal thing when we came along, so we didn’t get any real hassle.

We have always listened to a wide spectrum of music, everything from anarcho punk through to Kate Bush. Influence-wise, it was probably Hellbastard and Anti Sect in the early days. With a crossover of musical styles, what were the crowd like back then at your gigs? Was it a very close scene back then, with most bands in the UK knowing one another? What are some of your best and worst memories from those days?

Mostly anarcho punks, crusties and the odd metalhead. Everyone got on and I can only remember a few gigs marred by violence. The whole scene was run through letters, tape trading and phone calls. This is before the days of the Internet; today it’s very instant, but back then it felt very special to get a letter or tape through the post, someone taking that much time and trouble to write etc.

The scene was quite tight, but naturally the bands congregated in their own areas, so you had lots of scenes up and down the country. I liked that – the scene didn’t revolve around London, you had Hellbastard from Newcastle, Amebix from Bristol, Deviated Instinct from Norwich, Electro Hippies from Liverpool etc. It was a great network across the country.

Favourite memory is meeting so many great and colourful people and sharing gigs with some amazing bands – Hellbastard, Bolt Thrower, Concrete Sox, Electro Hippies to name but a few.

Worst memory was all the ‘crustier than thou’ shit; who could be the crustiest, drink the most cider and live in the most squalid squats. I hated that whole thing.

Were you involved in the squatting scene in London at this point? Can you look back on it with nostalgia or were they tough times? Can you tell us a bit more about the Kardboard Box squat venue run by Gutrot.

Darryn squatted, but the rest of us shared a home provided by a housing co-op. I know Darryn had it pretty bad, no power, freezing cold etc especially when he squatted an old water works station, that was the worst. Our house was quite comfortable in comparison, at least it was warm, dry and we had food to eat.

The Kardboard Box was an old DHS (state welfare) building I think. Gutrot and a collective of squatters took it over as it had stood empty for some time. They took down internal walls etc. and created a space to play in. I believe the first ever gig there was an all dayer which we were lucky enough to play at. The place was chaotic, mad and very exciting. I have fond memories. What was the idea behind the lyrics of “Rise of the serpent men”, nothing to do with David Icke and reptilians? What inspired the messages/imagery behind your music?

Nothing at all to do with Mr Icke and his very cheap track suits!! At the time, we were very anti-organised religion, which was the driving force behind a lot of our early stuff that filtered through to ‘Rise’. The title track lyrics are basically about the poor and vulnerable being indoctrinated to kill and be killed in the name of religion and greed.

Labels like Peaceville and Earache brought a very underground scene to the mainstream, making it much more commercial. Was this a good or a bad thing, do you reckon?

Success has always been a dirty word and I’ve never understood why, don’t we all want to be successful in what we do?? Be it being in a band or trying to be a good parent!! As long as it’s achieved by not climbing over others and it’s honestly earned, how can it be wrong? Peaceville started off tape trading and eventually turned into this label that gave the chance to release music to a lot of great bands. Great music equals record sales equals success. I know very little about Earache but I do know that without these labels, people who buy CDs by the bigger metal bands wouldn’t then discover the label’s back catalogue and get to hear the lesser-known underground bands like ourselves, Deviated Instinct etc. I see ‘Grind The Enemy‘ was bootlegged on vinyl a few years back, and I’m sure many other releases too, as well as t-shirts, mugs etc. Have you ever gotten in contact with any folks releasing bootleg Axegrinder merchandise?

Steve has put a stop to some rip-offs, but honestly, if you are going to spend your money on an Axegrinder alarm clock or shopping bag and it makes you happy, who am I to say no, just don’t pay silly money for them. Personally I don’t relish the thought of being woken up by ‘Hellstorm’.

How did the break up of the band come about? Did you go straight into your other bands Wartech and Flesh? Was it done to play something different to Axegrinder?

I got up one morning and cut my dreads off and announced I didn’t want to do it anymore. Everyone was relieved, there was no animosity, just a huge sigh of resignation. We played that night with Electro Hippies and went out with a whimper and not a bang! We had just run out of ideas and motivation and wanted to do something completely different, hence Wartech, Flesh and March of Anger, who Matt joined on keyboards.

Do you keep in touch with the current underground scene? What sort of music do you listen to these days?

Can’t speak for the others, but I don’t listen to any of that stuff, although I really have a soft spot for Extinction of Mankind and I love the latest Amebix album. I mostly listen to and try to tune out a lot of One Direction and Little Mix, the joys of having children!! When I do get the chance I listen to my music, Tool, NIN, Pearl Jam and a lot of old anarcho stuff.

You might have seen this question coming, but with the rise of bootlegs and reissues, it really shows your music is as popular as it ever was. Could you see Axegrinder getting back together at some point?

I very much doubt it, as Steve is really busy with his band System FX, who are recording their debut album now. I wouldn’t mind doing a one-off show or maybe a few dates around the world, but my family and job (I work in the music industry) take up all my time. Never say never though…

Thanks Sean for the interest and support.