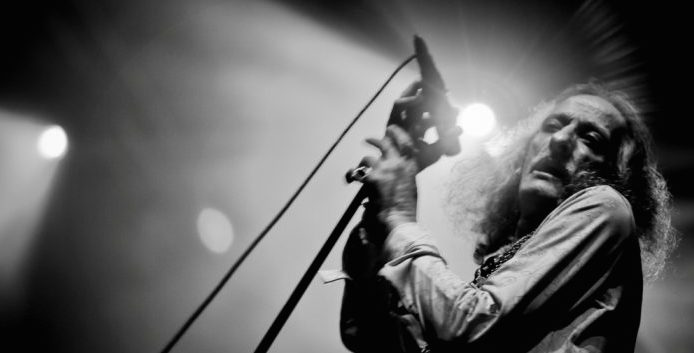 Everything about this year’s edition of Roadburn festival was about special shows, sets and collaborations that saw us salivating over the line-up many a month in advance. However, when the revelation of the running order came about, putting the ‘must see’ bands in practise proved to be a much more complicated ordeal than previously anticipated. But let me tell you that Roadburn clashes have become a stuff of legends, and commiserating over them turned into a new sports discipline in its own right. Show me a person who hasn’t raised their fist to the skies in desperation over their two fav bands playing at the same time, venues apart, and I will tell you they probably missed half the fun (or ‘fun’) and the true RB experience.

Roadburn AD 2016 had so much on offer, from Lee Dorrian handling the task of an official curator – who invited a number of incredible acts for his Rituals for the Blind Dead curated sets – to Icelandic black metal fury Misþyrming as artist in residence, who were to play three different shows during the festival. Not to mention a gazillion other bands and side shows, panels and karaoke, making sure no one ever got bored. There were also several logistical novelties this year; the newly re-vamped 013 looked fantastic, both main venue and Green Room were refurbished and their capacity enlarged, allowing for a significantly higher number of visitors. It is yet to be seen how this issue will be tackled in the future, because it seemed that the festival could not handle the pressure. There was constant and endless queuing; many attendees were irritated by not being able to see bands because of oversubscribed venues of limited capacity. Hopefully, this will be sorted out in the next edition.

DAY ONE (Thursday) kicked off with a band that were no strangers to the festival. Cult of Luna were returning for the third time, now to perform Somewhere Along The Highway in its entirety. Being the first band to set their foot on the main stage to an already full venue at 3.30pm proved that they were a very welcome and anticipated act. Having bumped into Arne of Marche Funèbre earlier that day, I was informed that he’ll be performing with Inverloch right between Cult of Luna and Der Blutharsch, which were on my checklist. This resulted in an unplanned detour to the Green Room, managing to squeeze in for two songs of this Australian death doom ensemble whom I’m hoping to see properly sometime in the future again. Having been a devotee of Albin Julius work since high school days, Der Blutharsch (and the Infinite Church of the Leading Hand) were one of the ‘must sees’ this year. Although the band has moved miles away from their musical beginnings, the underlying vibe of the new psychedelic krautrocky sound is still inherently dark and ever so hypnotizing. Het Patronaat was as atmospheric as ever and will see me coming back for couple of more bands during the remainder of the fest. Back in time for another almost resident band at Roadburn, Hexvessel started off their set on the main stage with the folky tunes from their latest release, bringing about good vibes wrapped up in a solid rock base. However, soon it was a run across the street for the sonic assaults of Oranssi Pazuzu, who had THE Het Patronaat crowd gaping in amazement. No matter how many times seen live, one can never get enough. A truly unique band in every sense. Half an hour in, it was already time to make a move for their Finnish brethren in the newest Roadburn venue addition, Extase. Identical to the household name of Cul de Sac, Extase has similar capacity, which unfortunately proved to cause many a headache in the following days. At least, for Arktau Eos’ performance, a spot was secured on time just in front of the miniature stage in a very condensed and intimate environment. The smell of purifying frankincense was permeating the air, joined by droning ambient sounds and otherworldly utterances met by the highest of reverences from the devotees in the front rows. It proved a hard enough exercise to snap out of this crepuscular ceremony and head back to the main venue for the one-off celebration of ‘Gothic’ in the light of its 25th anniversary. Paradise Lost, still at the top of their game, delivered a hearty performance of one of the staples of doom music which helped shape the entire genre and generations of music(ians) to come. DAY TWO (Friday) commenced with another sojourn to Het Patronaat for a special collaboration between Hexvessel and Arktau Eos in a celebration of ‘Mirror Dawn’, combined music and themes from both Hexvessel’s debut album and Arktau Eos’ Mirrorion. Incredibly well-attended for the first show of the day at 3pm, the audience was more than ready and willing to commit themselves to this rare aural treat.

Back at the main venue, everything was set for the beginning of Lee Dorrian’s curated selection under the banner of ‘Rituals for the Blind Dead Pt.1.’ The grand piano was dominating the stage in high anticipations of Diamanda Galás, the undisputed queen of vocal acrobatics. Some demands were set forth by the artist in order to help everyone immerse themselves completely in her performance, hence all photography was forbidden and movement out of/into venue was limited to the space in between songs. Inevitable huff’s and puff’s and words like ‘diva’ were spewed out, but we should understand that a performer of her calibre is entitled to such (not unreasonable) requests. I wish the official festival rule for ‘no flash photography’ was observed in the similar manner, but I digress… ‘Death Will Come and Have Your Eyes’ set featured a finely selected array of tunes, not least of blues and chanson française heritage, such as ’25 Minutes to Go’, ‘Fernand’ (Jacques Brel) and ‘See That My Grave Is Kept Clean’ (Blind Lemon Jefferson), clocking in at 1h+ and having both fans exhilarated and the rest desperately making it for the doors.

The next three acts on the main stage included Lee Dorrian’s own With The Dead, making a debut live appearance and unleashing their malevolent heaviness upon the world, the insanely mythical G.I.S.M. and Pentagram. For the Japanese armada headed by vigorous Sakevi, this was their first show after 2002 and what’s more, first ever out of their homeland! Playing a classic set (‘Document One’, ‘Shoot to Kill’, ‘Death Exclamations’, ‘Fire’) not short on aggression and violence, G.I.S.M. had the crowd going mental, and no amount of security pointing to the ‘no crowdsurfing’ sign to the side of the stage helped. This one is certainly going down into Roadburn annals with gold lettering. Before coming back for Pentagram, I’m off to the Green Room where Lychgate were just setting up. Normally a quintet, the British avant-garde metallers brought along an organist together with the church organ (doh!) for a first-time live performance of the entire An Antidote for the Glass Pill album. Although the organ sounded a tad too low in the beginning, it all came together towards the second half of the set, where it managed to fully shine through, unravelling its discordant harmonies and making the experience all the more uncomfortable and disturbing, as it should be. Pentagram provided a much needed breather in a form of pure rock and roll to the grateful congregation. These Roadburn darlings greeted us with their best-of set (‘All Your Sins’, ‘Sign of the Wolf’, ‘Forever My Queen’) warranting fun and good times all the way through. Úlfsmessa, being a unique collaborative effort of several Icelandic black metal and ritual drone bands and debuting for the first time out of Iceland, was supposed to be the culmination of the evening (if not festival itself). However, owing to the enormous interest in this performance, limited venue capacity and what seemed like an endless queue, by the time I got in, I couldn’t get past the last rows (only rear entrance to the venue), the performance was well underway, I could only vaguely see anything happening on stage standing on my tiptoes, resulting in not being able to ‘get into it’ at all and leaving after 15 minutes. That was quite unfortunate judging from the stellar comments and reviews of those lucky ones who managed to get in on time and stay in for the whole thing. Sadly, Úlfsmessa, I’ll have to make a raincheck.

In this article:Pentagram, with the dead