On December 7th, the narrow hall of downtown Los Angeles’s 5 Star Bar packs out for good reason: doom titans Bell Witch and Monarch are in town and local heavyweights Future Usses and Skyeater are opening up. Profound Lore Records has to be proud of the former, as they are the imprint supporting the new releases by Bell Witch and Monarch. Not strangers to one another, the two have shared a van in the past with a short tour across southern Europe a few years back and are scheduled to repeat an Old World trek together in spring 2018. Their sound compliments each other greatly and it seems they have nothing but the utmost respect for their partnering groups. Each band took the time to answer some questions thrown at them about this tour and the new release that brings them here. Bell Witch’s third LP, Mirror Reaper, has a slew of press coverage with great compliments and praise, landing in many “Top 10 Lists of 2017” in the metal genre. “To be honest, it’s surreal the stuff Dylan [Desmond – bassist/vocalist] and I have read about Mirror Reaper, we thought people weren’t going to be into at all,” responds drummer/vocalist Jesse Shreibman. “Seeing it get a degree of validation in the mainstream world is both cool and weird, and speaking for myself, the goal is to do more of the same and if people are into it, that’s amazing,” Shreibman additionally adds. Desmond goes a step further, “There have been some heavy reactions we’ve personally heard from people on this tour about how Mirror Reaper has been a coping mechanism for them. In Oakland, a guy came up to me after the show and told me how his father passed away a month ago and how this record has assisted with his grieving process and he was very emotional when he told me all this. That’s the type of feedback we’re hearing on this tour; it’s not uncommon at this point and it’s a compliment that stumps us – of course, we’re grateful, but we’re speechless sometimes when we hear these stories people tell us.”

An aspect that has also been a cause of the media swarm around Bell Witch is the passing of co-founder/drummer, Adrian Guerra. We’re not going to get into details about it, there’s plenty of published pieces out there already. Gratitude aside, both members also expressed concern with how the social media and journalists have handled the details of their recently deceased drummer/co-founder, Adrian Guerra, a go-to detail that has been a focal point with the music press and the Bell Witch camp lately. Desmond states the obvious, “It’s weird to talk about upsetting things, and even though all the outreach and condolences are cool, it’s still very weird and surreal to me. When it happened, I got blown up online and via phone about it, it made me uncomfortable and I shut myself off for a while because the outreach was becoming overwhelming.”

Shreibman talks about his feelings on the media’s portrayal of Guerra’s death in relation to the release of Mirror Reaper, “I’ve had a lot of friends pass away, but never a friend that attracted such a media blitz – it’s like the spotlight is shone on us all and suddenly it’s a keystone representation of this record. It’s not a marketing tool, it’s a human being who has a family and whose family is reading all the stuff that’s put online about Adrian and Bell Witch – that shouldn’t be objectified at all. What’s crazy is some of the misinformation that is floating around in regards to how Adrian, Dylan, and I worked with each other. Then it gets further beat into the ground and misconstrued, and we’re just like, “no, that’s not accurate and you’re still talking about a person who just died and who has a family who is reading all of this.” Whether you’re a journalist or a person on Facebook, you have a social obligation to be informed and dig a little deeper if you’re going to attempt to represent something serious. If you want to make a bunch of stupid jokes, go for it, but it’s a little visceral for me when I read some of the shit that’s put out there about Adrian.”

“I read something recently put out where Adrian is credited as the bassist!” Desmond humorously states.

“Seriously? Someone published that I was the roommate of Adrian and the old tour manager – neither of those things are true!” Shreibman concludes. The production of Monarch’s latest release, Never Forever, is a homebody in comparison to their last effort, Sabbracadaver. “A lot of planes were involved in that record. Chicago, Europe, Asia, Australia, recording happening in Canada, it was a lot of logistics,” states founding member/guitarist Shiran Kaïdine. At the time, members living all over the world (Canada, France, and Australia) and had to utilize their off time while on tour, the only situation in which all were together in a room, to put that record together. Now with everyone centralized in Bordeaux, things are a little easier figuratively saying. The relationship of the core members of Monarch hold runs deep, and Kaïdine confirms that it would be near impossible to hold the band together if the majority of them departed. “Monarch couldn’t continue if Emilie [Bresson – vocals/founding member] or Michell [Bidegain – bassist/founding member] left, I feel. Us three together have been through a lot and were friends before the idea of Monarch came up. We’ve lived together, done art together and have been through some very difficult situations I feel could have collapsed Monarch but we pulled through. We’re very dedicated to this band and it shows, nothing can really stop us and we’ll overcome whatever to continue together.” The Sabbat Noir era (2010) was the last time they graced (or punished if you want to say) the US West Coast, with their first ever US tour. Has it gotten easier since? “A bit – since it’s our second time, we know our expectations this time and hell, we’re not Maiden or Metallica, so we know what to ask for too,” Kaïdine states, as if he’s been asked this before. Without a US agent and a relationship with Bell Witch already in place, the pairing made perfect sense. “Not only was it sensible, it was also great timing, because Bell Witch’s touring availability was almost exactly the same as ours – why not join forces?”

Never Forever is the group’s eighth album and their second effort under the Profound Lore flag. It’s a damn heavy album, like all their other releases, however, Kaïdine says differently and gives the insight on how they set off differentiating each album. “We look each album as part of a new path we’ve set ourselves on and experiment with different techniques and search for new methods of heaviness. Not only this, we incorporate other genres into the music that we can tell is there but understand it would be hard for the listener to distinguish at first. We’ve done it with hip-hop and all different sorts of metal too – it’s there! Monarch is about expressing new ways of heaviness with each record we do.” Concluding our small talk, Kaïdine highly recommends that we get hip to some of his favorite groups from Bordeaux, Baggare Générale and black metal group Chambre Froide.

I would like to thank Bell Witch and Monarch for giving their insights before the show – onward to the gig itself.

Opening up the night is Skyeater, a doom/black metal group from the greater Los Angeles area who recently had their debut EP, The Maw Of Time, placed in LA Weekly’s “Top Metal Albums” of the year. Good call for nabbing these guys, they’re just as savage live as they are on the record. The stage in 5 Star Bar isn’t the biggest area to set up, but these guys made themselves’ look physically imposing that night on that wood base as they blasted the audience with their half-hour set.

Up next, Future Usses delivers an atmospheric set to the slowly filling room. Their sound is entrenched in the post-metal world and lightens up the mood after the crushing set beforehand. All three members, being seasoned musicians, are locked in with each other’s movements and passages throughout the half-hour set. Guitarist, Sascha Dunable, gives a clinic on stage on how to achieve rich harmony with a heavy feel by maximizing the capabilities of his pedal board. From reading online, they’re due out with their debut next year and after seeing this set, it should be a good listen.

The room is about at capacity when the French doom quintet Monarch takes the stage, and after hashing out some technical issues with Bresson’s mic, the amps go off standby and the harsh droning feedback permeates throughout the room. Bell Witch drummer, Jesse Shreibman summarizes his feelings watching the group on this tour with this quote: “Monarch is the only band I’ve ever toured with that gives me goosebumps each time I see them play.” That’s a high compliment from a guy whose band is every bit as heavy and powerful sounding as Monarch is. For their hour long set, the group powers through three compositions that backed up Shreibman’s claim. Doom metal can be described with a variety of phrases to describe the conveyed feeling, and Monarch’s brand is absolutely menacing. Bresson’s voice weaves between ghostly chanting and banshee shrieks while the volume of guitarists Kaïdine and Stéphane Miollan along with bassist Bidegain are at a level where if pushed any higher, it would shift the positioning of the audience’s internal organs from the low end alone. Drummer, Benjamin Sablon, holds a death march beat, occasionally looking up as if not to hit the ceiling of the small storage area where the kit is. A funny thing is that while talking with Kaïdine outside the bar, he mentions their first gig in their hometown of Bayonne – the audience believed their actual set was only a sound check. An analogy that comes to mind when seeing Monarch for the first time is it is as if I am watching a hostile looking, pitch-black obelisk shooting light into the crowd. If you’ve seen Hellraiser 2, you’ll get the reference.

Coming close to midnight at this point, the room looks like it’s at a capacity at this point, and Bell Witch come center stage. Desmond takes stage right with his rigs set up behind him, while Shreibman angles his kit to face Desmond at a 45-degree shift and they begin to run through half of the Mirror Reaper album. With Bell Witch, minimal personal yields maximum volume as Desmond’s Ibanez Terra Firma six-string is played through three different stacks and utilizes a multitude of effects to give it a polyphonic sound over the slow drum cadence of Shriebman. Both guys on stage were in a trance-like state as they focused on each complex passage of the track with intense musicianship on display before us. Desmond’s bass tone ranging from melancholic overtones via to massive distortion levels at the drop of his toe while harmonizing the high range side of the vocals and Shriebman owning the low guttural vocals. Normally, subgenre names can be outright ridiculous at points, but with the funeral doom genre and Bell Witch making regular appearances together in recent articles, it makes sense due to the atmosphere they evoke and the content that surrounds their music.

Europe is lucky to experience these two sooner than the rest of us, for now. 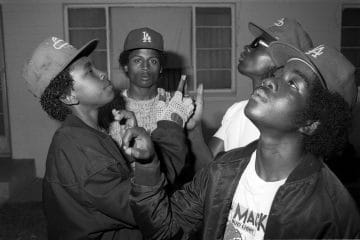 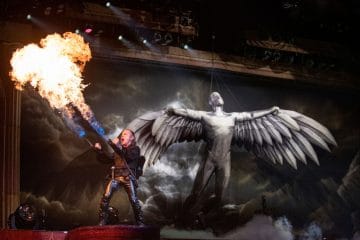 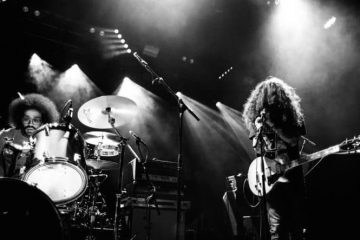