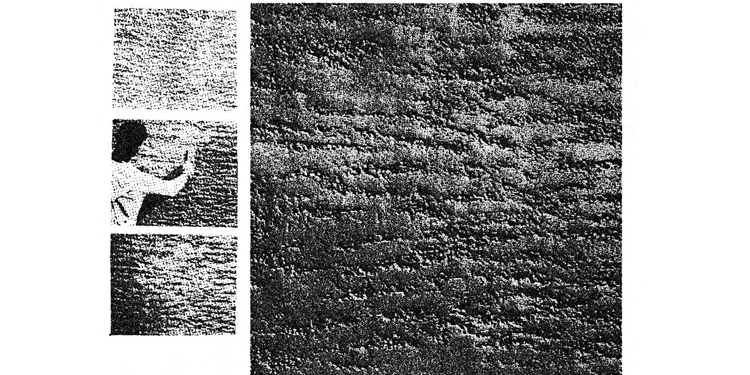 Experimental electronic/cryptic industrial label Summer Isle sure knows how to find them. The label scans through the underground, finding interesting projects and releasing limited runs of records in cassette format. Their latest find is Code 0066, regarding the identity of which I cannot give much information. The project has been fairly active in terms of the release output, putting out a debut album, 53 Minutes, in 2012, and following that with the four-track record Torino.

La Belleza Del Cemento is the follow-up to Torino, and the first Code 0066 record to be released through Summer Isle. The foundation of this work lies within the techno genre, as the steady beats are repeating themselves through an infinite loop, with their appearance enhanced by additional percussion, fleeting synths and mesmerizing vocal samples. This adds up to an overall bleak perspective, as is pointed out by the title (originally Italian, translated to The Beauty of Cement,) which becomes inseparable from the approach. As Code 0066 move towards more minimal and ambient territories with “Myrsky” and big background drones begin to transform the scenery and piercing synths add the final touches, the dystopian setting is complete.

This quality also comes from a couple of other influences apparent in La Bellezza Del Cemento. On one hand, Code 0066 make great use of the cold detachment of industrial music, as the heavy, constant beats let on. Merged with the monotony of techno, it adds a disjointed connection to reality. At the same time, there is a constant push towards a noise domain, with a quite interesting lo-fi approach undertaken by Code 0066. The noise background acts as a hovering effect, a constant reminder that everything might just erupt at any time. It is the merger between industrial and noise though that sees the project crafting its more interesting pieces, combining the menacing, mechanical feel of industrial and the hellish ambiance originating from noise.

Even though most of La Bellezza Del Cemento is directed to a darker aspect of techno music, Code 0066 also make use of the more upbeat and in-your-face attitude of the genre. Allowing more playful beats and laser-like synths to appear, they offer a good change of pace with their different manipulations, always keeping the mystical quality of their music just beneath the surface. That is what makes for such an interesting record.