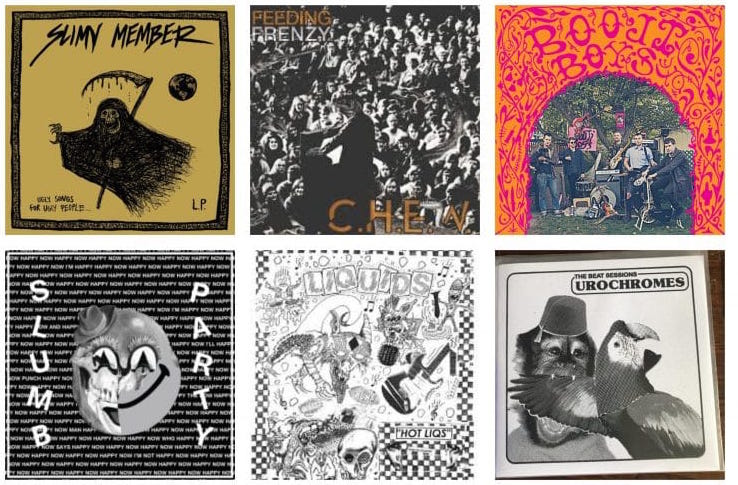 How can you not love a label called Drunken Sailor? It reeks, fortunately, of bar fights, fortuitous sex, lousy wine and people who laugh in the face of danger. That pretty much sums up what rock’n’roll, and punk by association, should be and a lot of times aren’t. Partly because it’s so damn easy to produce a record with a big stadium rock sound when some stuff should just sound nasty, compressed and full of hiss and noise.

That is definitely what makes sense for Julian of Drunken Sailor records because for him, some of the best music of the last 10 years was recorded on a tape player, so screw you Pro-Tools and Ableton Live.

Even if D.S. pouts itself by not caring about perfection, it’s rooster is pretty eclectic, and you can easily find noise-rock stuff like the amazing Be Free by Droids Blood, Latino death punk Heterofobia or the new Booji Boys record, Tube Reducer. Going back to more dated stuff, there’s the excellent Negative Space, who sound like the result of casual sex between early Nick Cave and The Fall, edgy punks Personality Cult, the dirtiness of Slimmy Member and the melody of Dark Thoughts among excellent stuff like C.H.E.W., Personality Cult, The Celetoids or Bikini Cops. It has become one of those labels that makes sense following, since they are unable to put out a bad record. So we had to know what the goes on through Julian’s head to keep putting out such kick-ass records and introducing great bands through the world.

Why would you call your label Drunken Sailor?

Ha, I have no idea really. I was meant to be starting a small DIY label with one of my oldest friends and we needed to come up with a name. I remember thinking the names he came up with, sounded so METAL! I guess I just thought Drunken Sailor would stick in peoples memories.  Anyway, I went with it, I’m not sure if my friend liked it but he never came on board with the label, and here I am 10/ 11 years later, still doing it on own!

What is your label philosophy, if there’s any?

There is no philosophy as such, obviously, I only wanna work with good people, no sexist/ homophobic/ racist shit etc, but that’s just a given. Just to be honest with people, be nice, decent. That’s it really.

Your rooster is pretty electric. What do all bands have in common that makes you choose them?

I honestly just release bands that I like, and I like a lot of different stuff. I never wanted the label to release just a certain genre. I definitely go through different phases with music but I think everything I have released has something in common, even if one record sounds nothing like the release after. I’ve met most of the people I have released records by and they are on the whole, inspiring kick-ass rockers! So maybe that is the glue that connects everything, pick bands with the best people.

What made you start a label in the 21st century when most people just download stuff?

Boredom? I dunno, I like to be busy and my wife and I had just had our second child, so starting a label seemed the logical choice to make my life even more complicated, although in the early days of Drunken Sailor, the label was very different. I didn’t release as much and a bunch of releases would be split label releases. I grew up with vinyl, I had tons of records from an early age, I was really lucky that my mum and uncle were really into vinyl in a big way, so I would get records for birthdays and Christmas. I did the usual thing, leave school and sell all my vinyl to pay for stupid things, then spent the rest of my life buying them back at inflated prices. Downloads are great, listen to music on the go, but they don’t hiss/ pop/ jump, you don’t get killer art, I just love vinyl and I am too old to change now.

No idea! Punk to me is learning. Acceptance of the difference in people. There are a lot of incredible people in the punk scene, people in bands, people running DIY spaces, making fanzines, flyers, screen printing, I guess it’s pretty easy to stay ‘punk’ when you are surrounded by inspiring people.

What other labels do you feel help putting great bands out there?

Oh, there are so many, in the UK, LVEUM, Static Shock, Specialist Subject, Everything Sucks, Upset The Rhythm are just a few that all put out killer records, but do way more too, gigs, fests, booking tours. I love Neck Chop (the next batch they are putting out are incredible), Total Punk. Lumpy is one of the most innovative labels in the punk, kinda, scene…Dead Broke, Dirt Cult, Byllepest Distro. Seriously though there is too many to mention, if someone tells you there is not enough new music out there, they are lying cause there are hundreds of incredible labels totally killing it with releases right now.

Has punk become too clean and produced?

I think it did in the late 90s but the stuff I listen to is rarely clean. I guess it’s what you like and I like distortion/ noise/ dirt. Most of the bands I release, the bands record it themselves and aren’t really aiming for that clean sound. Some of the best music I have listened to in the last 10 years was recorded on a tape player so maybe I am the wrong person to ask, but I would say no.

What would be your dream record to put out?

The Marked Men. But that’s not gonna happen so maybe a Jeff Burke record in some form. There are tons of bands that I would love to put a record out with but any kind of record with members of The Marked Men, I don’t think any of them have released a record that I don’t love. Oh, or a Reigning Sound record cause, Greg Cartwright. I did actually ask him once, but nah, he was not down!

What bands are you putting out next?

Next up (we have just released the incredible Cereal Killer, Droids Blood and Heterofobia LPs) is the third LP from Booji Boys, ‘Tube Reducer’, which in my total biased opinion is amazing. At the moment we have The Mind LP and Gino & The Goons LP being mastered by Daniel at North London Bomb Factory Mastering. Few other things that I probably shouldn’t say anything about at the moment, but yeah, we are not slowing up just yet.