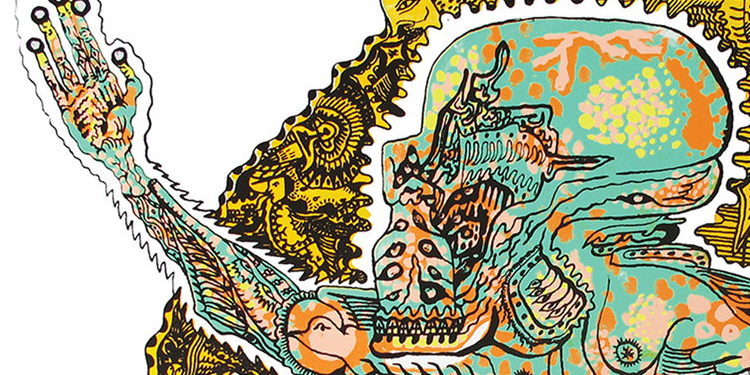 Ascending a Mountain of Heavy Light is a natural collaboration, not only because it is not the first time The Body and Full of Hell have worked together, but also due to the shared vision of these two extreme music pioneers. The aim of both bands is the expansion of extreme music beyond its restricted confinements, a testament that is made not only by their releases, but also through their collaborations with diverse musical entities, from Thou and Krieg, to Merzbow, The Bug and The Haxan Cloak.

So in 2016, this obvious collaboration first came to fruition with the excellent One Day You Will Ache Like I Ache, with the two acts displaying their affinity for harsh music, big noisy soundscapes and relentlessly heavy riffs. The continuation of this relationship is said, however, not to have come due to the similarities between the two bands, but rather to highlight their differences. And in a sense that is true when listening to the resulting record, Ascending a Mountain of Heavy Light. In this case the work is more abrupt, not in terms of the cohesion but in terms of the narrative. Parts are configured to maximize impact, switches are made on a whim and the end result is a gripping trip through an extravagant musical realm.

As is the case with most works from either artist, the instruments, hardware and software at their disposal is in ample quantity. Samples and synths, loops and programmed drums, saxophones and drum orchestrations all find their way into this sonic collage, with esteemed guests re-appearing in Ben Eberie (Sandworm) and Chrissy Wolpert (Assembly of Light Choir,) as well as new collaborators, with the magnificent inclusion of Brian Chippendale, known for his work with Lightning Bolt.

The foundation of the record is still found in the bread and butter sound of Full of Hell and The Body, in the affection towards noise and the journeys to the extreme edge of the metal spectrum. Dissonant qualities are awakened in the very start of the record with “Light Penetrates” along with screeching vocals and soon enough the sax comes in to mark the final push that drives you over the edge. The two acts dive further into the electronic area as well with “The King Laid Bare,” probably the most electro performance they have ever delivered. Grindcore and sludge still play a big part of the overall sound, the first especially useful in driving the point home. Destroying the established soundscapes with sickening blastbeats in tracks like “Farewell, Man” or combining with noise in “Earth Is A Cage,” the fury and force of the genre is implemented perfectly towards that end. The heavier sludge of The Body on the other hand brings a towering air to the fold, with the heavy riffs moving the music further in the ending of “Farewell, Man.”

But it is the open-mindedness and the adventurous sense that has always made both acts so alluring. The hip-hop element, established through the beats and rhythmic patterns, fits perfectly with the heavier sludge moments. The beat in “Didn’t The Night End,” reveals the full effect of the slow groove, bringing forth this disfigured facade of the old-school hip-hop ethics. However, the more extravagant attitude is found in two other instances. Firstly in the free-jazz induced “Our Love Conducted with Shields Aloft,” with the performance comprised of improv drumming and a fierce noise quality in the background. On the other hand, reggaeton and jungle are visited to create an opus such as “Master’s Story,” where the repetitive themes and sampled drums combine to create an astounding, trippy moment amidst the heavy, ongoing storm of the album.

Ascending a Mountain of Heavy Light is exactly what you would want to hear from these two acts when collaborating for the second time. Staying true to their shared vision of expanding the boundaries of extreme music, moving across genres and finding inspiration in diverse areas they build on their previous work. Looking forward to the next time they combine.