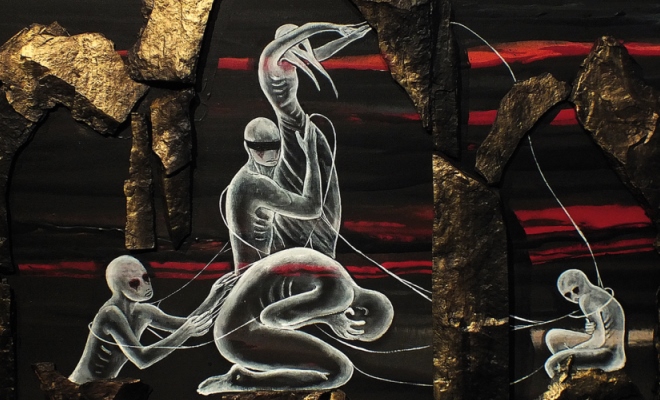 In recent years, there hasn’t quite been any black metal band as consistently brilliant as France’s Blut Aus Nord, save maybe for their fellow countrymen and sonic brethren in Deathspell Omega. Their ‘90s output was solid, but 2004’s The Work Which Transforms God is an absolutely flawless piece of avant-garde black metal, rivaled only the band’s 777 Trilogy released between 2011 and 2012, the final installment Cosmosophy marking a beautiful and breathtakingly versatile take on the band’s sound.

EP releases have surfaced since then, but this split Triunity with P.H.O.B.O.S. takes centre stage for the mysterious outfit, bearing a great deal of significance, as the band must surely be on course to release a new LP sometime in the not-too-distant future.

Here on Triunity, they serve up an impressive 19 minutes of hypnotic black metal that’s sparse on vocals and ridden with many of the traits that made Cosmosophy so untouchable. This manifests itself on the opener, ‘De Librio Arbitrio,’ with spectral and glistening lead guitar work that eventually gives way to miasmic and jarring passages of mid-tempo black metal and snarling vocals from the abyss.

‘Hùbris’ is an altogether more lethargic song on the other hand, where Blut Aus Nord flirt with their melodic side and the occasional doom tendency, while ‘Némeïnn’ returns to a more unruly pace, with the guitars at their most piercing.

The recurring theme with Blut Aus Nord’s latest material is the drive of the gorgeous lead guitar that is epic and grandiose – in the truest meaning of the words – coupled with the altogether cacophonous rhythms and indecipherable growls and hell howls. P.H.O.B.O.S., the pseudonym of Frenchman Frédéric Sacri, meanwhile, is a very different prospect and unfortunately gets a little lost in the shuffle here.

It’s a tone and vibe that’s maintained throughout his side of this split. There isn’t a great deal of deviation within these tunes though, but P.H.O.B.O.S. seems intent in simply making the listener feel uncomfortable.

This is definitely Blut Aus Nord’s moment in the end, proving that they are truly one of the few unbeaten black metal bands of the last decade or so.