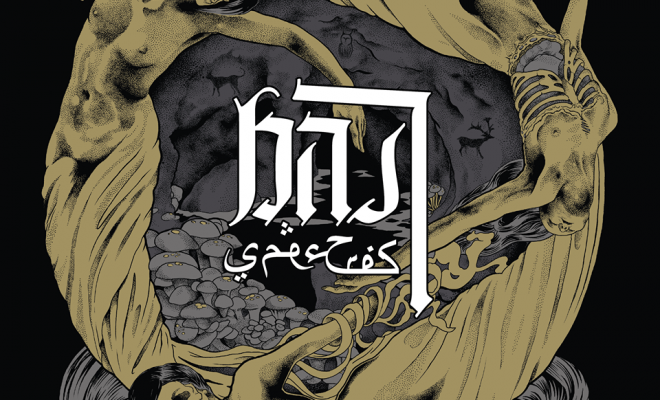 London based Bast have been slowly creating a name for themselves on the local scene and with their recent support slot on the Conan tour and the incredible presence of their debut full length Spectres, the trio have all the ingredients to completely break out. Their sludged out blackened doom travels the full spectrum of sheer heaviness and from the black metal leanings of opener “In the Beginning” to the gorgeous instrumental behemoth that is “Psychonauts,” Bast go a long way to showing that they’re more than a one trick doom pony.

Spectres is a monumental work and the sounds and patterns that are contained within are huge, beautiful and deathly weighty. Their debut has been a long time coming after the band formed way back in 2008 but as they say, good things come to those who wait and Spectres is certainly worthy of that wait. Opening track “In The Beginning” slowly builds to a crushing beat and a distinctly black metal tone that serves to push Bast increasingly further away from the sludgy tag that they’ve had bestowed on them. While it’s a fitting box to put them in, the band are so much more and Spectres is the sound of a young band fully committing to experimentation, and it paying off. “In The Beginning” moves with blackened grace towards doomier territory and fuzzed out lines of guitar that crawl with feedback and splice into “Denizens” with a consummate ease. The track constantly evolves and shifts its boundaries to accommodate the more blackened edges of the vocal range (handled by drummer Jon Lee) which give way to the the huge vocal approach of Craig Bryant (guitar) who commands the soundscapes with authority and power giving Bast a weight that is tangible in its presence. This first track weaves through a plethora of sounds yet it passes with a cohesion that belies the multitude of sub-genres that dwell within. Black metal, doom, gorgeous shimmering post rock passages and a grime that sits beneath it all allow Bast to truly step up and take flight.

“Denizens” continues to eschew the traditional musical conventions of doom and again incorporates many different aspects of the darkened sphere of sound that Bast sit within. Heightened and harrowing screams play off bellowing and guttural vocals, gorgeous and almost clean lines work their way in occasionally and lift Spectres into outrageously interesting territory. The album’s title track kicks with a rollicking and outrageously heavy pace before stepping back completely into gentle guitar lines that prelude the storm that is the crushing, crunched down final minutes. It’s a journey that offers a rounded experience of the Bast sound and a track that pushes into the aforementioned instrumental monolith that is “Psychonauts” which pulses with an exploratory fervour and showcases Bast’s affecting and ambient side. Spectres is already one of the heaviest records released this year and final track “Outside the Circles of Time” aims to push that knowledge ever further. The song navigates melancholic paths without falling into clichés and voyages the waters of sadness and the unattainable on gorgeous guitar inflections and psychedelic progressions, building the song and its walls higher and questing for the truth with aggressive beats and a solo to die for. The harsher vocal of Jon Lee again lends the song a distinctly darker tone in the latter half of its time before the track descends in a whirlwind of sound and staggering heft.

Bast need to be on your radar and Spectres must be acquired.

Spectres can be purchased through Black Bow Records and Burning World Records and can be heard here.