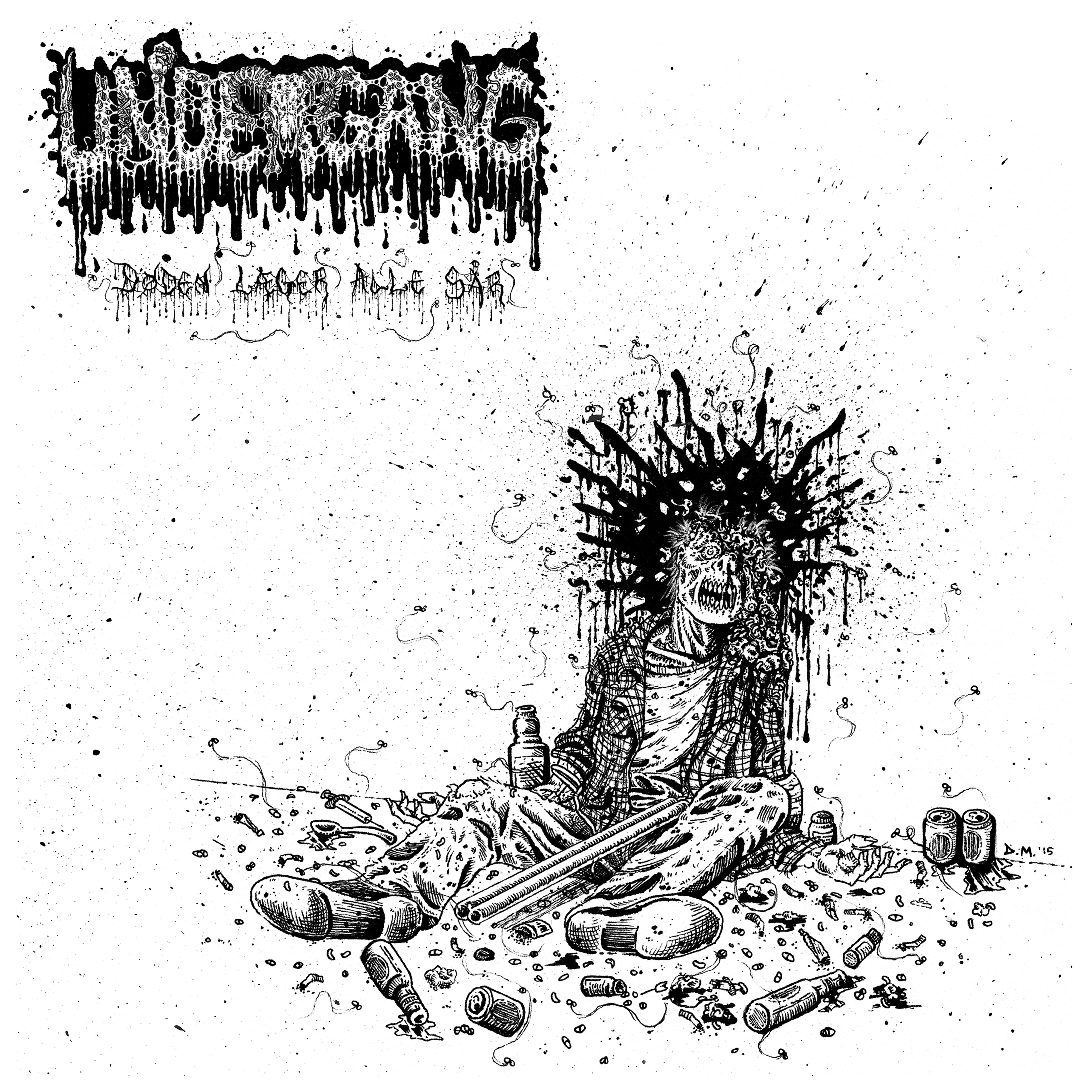 A new release from Undergang is cause for celebration. These guys just know how to make filthy, dark death metal right. Their new album, Doden Laeger All Sar, comes courtesy of vaunted label Dark Descent Records, and Undergang deliver the goods as expected. Their previous release, som til din ligkiste, was hard to top, but Undergang don’t freak out on Doden Laeger All Sar by using clean singing and acoustic guitar. Al likes some of that shit on other albums, but they can stay the fuck away from Undergang’s records. This album shows them doing what they do best: play groovy, mid-tempo jams; go half-blast; vary the drum patterns; play the slower segments with killer double-bass kicking; shred the sixth string with malice; and play those simple but original catchy-as-hell riffs. Like Lamb of God? Wait for their new album and don’t mess with this music. Like Undergang? Play this album like you’re havin’ a party. Do a zombie shuffle or two and eat some good party food.

Really, these guys never mess up. They’re a reliable institution in the underground. The guitar sounds like sewer rot is blasting out of the amps. The drums stay in orbit, but features some nice fills on occasion. The bass adds to the down-tuned discordance. Undergang don’t play hits. Doden Laeger All Sar has no fillers, and is all frills. Really, Al Necro begged for this assignment. Doing an Undergang review is like praise and worship at a non-denominational church. Thank mothereffin’ Satan! The riffs, as mentioned, are simple but original, and these guys know how to put a whole album’s worth of that quality material on-hand. No techy riffs here. No guitar wankery. No Slash-posturing poser solos. Absolutely underground death metal of the highest calibre. They do cut the distortion briefly on the last track and pluck some notes classical-folk style and the resulting melody is eerie as hell. You can’t say Undergang features one-track minded musicians therefore. It sticks out like a thumb out of someone’s foot, but it does a nice job adding something totally new. I ain’t havin’ any of you tellin’ me they’re selling out like its some fuckin’ ballad or something. No ballads here, brothers of the CVLT!

The last track also features a solo, and its cool as buttfuck. They don’t hiccup one bit on Doden…so salivate over this if you’re headed to the butcher’s for some meat. Undergang have ten great tracks dripping like the freshly-gutted innards of a wild pig.

If the mid-tempo groove doesn’t turn you on, this shit ain’t for you. If you like tremolo-riff and blastbeat from end-to-end, about time you get into something new. Else, if Undergang always made your pulse quicken like you’re havin A-Fib, check this out right away. Blastastic? No. Fantastic? Yes. If you’re still waiting for bands like Slayer to get second wind, you ought to be ashamed. Forget it, dudes, it ain’t happenin, so forget the mothereffin mainstream metal you don’t have to drive far to pick up vinyl for. This, maniacs, is as Cvlt as it gets!