When it comes to engraving, few people dispute the supremacy of Gustave Doré, but amongst those famous artists that performed this particular form of art, you can find other great names like William Blake, Francisco Goya, Giulio Campagnola and the one we’ll talk about today: Albrecht Dürer. This German engraver (1471-1528) is an all-around artist, as his numerous paintings have shown, but we will be focusing on his black and white engravings on wood and copper for today.

You are probably already familiar with his work, but it can’t hurt to see it once more, as many of today’s painters, engravers and designers took inspiration from him. I actually decided that it was time to dedicate an article to Dürer while reading a recent interview of Fortifem where they quoted him as a main influence. Although, I began to take interest in his work a few years ago with the re-release of the first EP Rigorisme by Calvaiire, where the artwork was based on “The Penitent” by Dürer. He was often associated with religion (and Christianity) due to the obvious symbols and overall themes that you could find in his work, like scenes from the Bible (the Apocalypse series, the crucifixion, the last supper), Bible characters (Saints, Demons, Devil, Angels), or just regular sinners asking for God’s mercy. Some of it – not just the engravings – are still the object of interpretations, like the magic square that you can see in “Melancolia I”.

As you’ll see, for artwork made circa 1500, it’s pretty amazing. 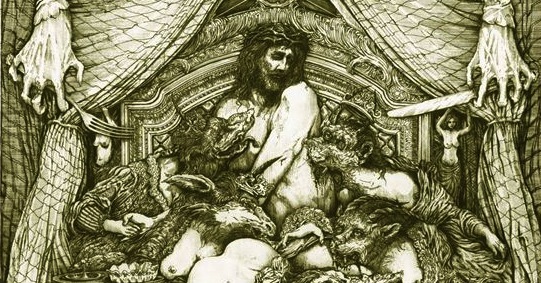 What happens when a Polish architect gets into the making of black metal artwork? Zbigniew M. Bielak, that’s what happens. Working with bands like...