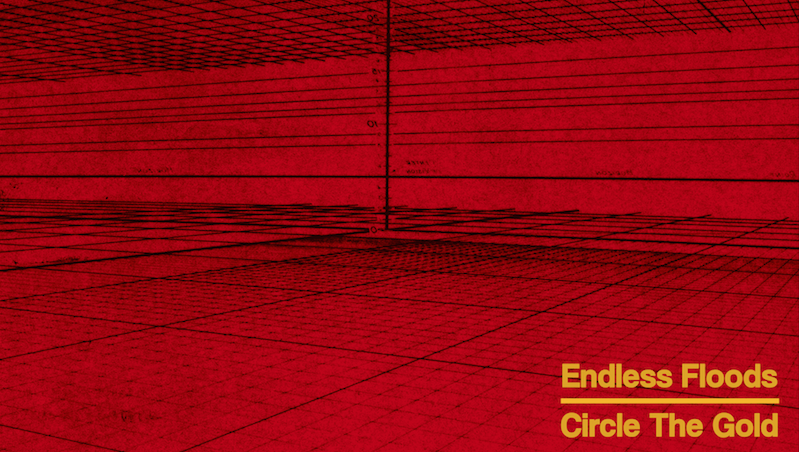 Perhaps a more peaceful approach for the under fire French president to consider was calling off the water cannons and rubber bullets and instead try unleashing Endless Floods’ new album on the angry mob. The two-track release is such a suffocatingly slow record that it almost defies belief to think anyone could muster the energy or enthusiasm to toss a petrol bomb at the gendarmes to this backdrop of unequivocally monolithic doom.

Circle the Gold is the third album from the Bordeaux trio, formed three years ago by Stephane Miollan (Monarch, Bombardement), Benjamin Sablon (Bombardement, Shock) and Simon Bédy. It reaches out to melodic margins fractionally more so than their self-titled debut (2015) and their 2017 sophomore release II, while remaining an intrinsically prohibitive piece of work which slowly sucks the air from the room. Consisting of two lengthy compositions, the opening title track and ‘Seeds,’ neither offer little in the way of light relief. Indeed, little daylight is allowed to illuminate these two sustained angst-filled aural admissions which will at times have you reaching for a glass of water in a bid to dilute the despair. As with the likes of Bell Witch, whose own single track album Mirror Reaper figured so prominently in end of year charts, Endless Floods build walls of unrelentingly despondent doom in which residual drone elements are cushioned by no less demanding passages of ambient threads. The first blow has a ponderous start, like a slowly swinging pendulum, until Stéphane Miollan adds his vocals, a piercing anguished cry doing little to lift the mood. A sombre instrumental passage smooths the waters to such an extent that at times it’s a challenge to detect even the faintest ripple as Endless Floods play an extended waiting game. Some more generous guitar cuts toy with prog, occasional drum kicks from Benjamin Sablon preventing the navel-gazing from becoming over indulgent.

Having kept you enthralled throughout the 18 minute opener, Endless Floods then proceed to do the same on the even longer ‘Seeds’ which opens with the kind of aching crawl that will resonate favourably with followers of Yob. Miollan’s pained cries at times are also reminiscent of Ohhms’ vocalist Paul Waller. ‘Seeds’ itself has a few more shades than the opener, and also hints at a more aggressive stance. While perhaps not quite latching onto any recognisable groove as such, the riff battles do occasionally fall into a pattern of sorts. It’s just that you need to work a little to align yourself to them. The 20-minute trawl through your subliminal senses also features an almost teasing ambient phase which is only broken when a percussion detonation finally bursts through.

Endless Floods sustain a tone so disconcertingly heavy that you almost need to book yourself in for some fitness sessions with a personal trainer before attempting to face this release. There is a moroseness about these two tracks that makes it a challenge to lift your head from your chest. While most would shy away from these at times almost gossamer thin rhythms, those who find solace in such work will find their doom diet inexorably enhanced by Circle the Gold.