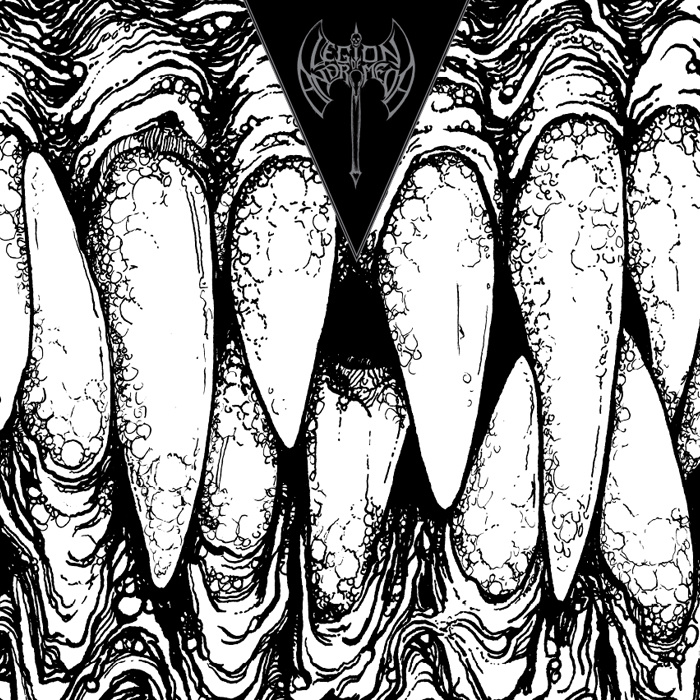 WTF!? Legion of Andromeda might be an apt name for this band, considering their music is far out! Honestly, the first time I heard this, I was reminded of why I love reviewing albums on CVLT Nation so much. Legion of Andromeda’s Iron Scorn just needs to be heard by listeners, free of preconceived notions. Y’all shouldn’t worry if we’re not hearing “Enter Sandman” for the nth time. In fact, the first time I heard Iron Scorn, I thought any comparison to their music wouldn’t be possible. What about Incantation meets Mudhoney? Fishbone meets Fear Factory? None of that does Legion of Andromeda justice, so wipe your asses free of labels and come to the party!

This is one groovy spin. The rhythm guitar is playing Tony Iommi on hallucinogens, and the drums are a one-shot deal – slow double-bass kicking with a cowbell crash instead of a hi-hat.

The riffs are fun to play, just don’t play it to a bunch of Coldplay fanatics or you’ll realize just how picky they are about music. If it’s played on a top forty station, you can bet they love it. That’s all well and good, posers, as Legion of Andromeda’s Iron Scorn is certainly an acquired taste, so if you like your albums replete with pop-song choruses, gtfo mothers! Don’t come to our clubs wearing Winger shirts!

The vocals sound like they’re layered with effects, but so what? Nergal does that too. You cvlt warriors better find a bunker somewhere if you play this on a loudspeaker. Should extraterrestrials hear the shit on Iron Scorn, they might start vaporizing mankind in a heartbeat. Do you guys think that aliens are gonna own up to playing this shit in their cd players? Not with Elvis and Michael Jackson in their laboratories! Their flying saucers must play some of that pop dance shit to begin with. Let’s just hope they abduct Justin Bieber next, ok, guys? Literally, Legion of Andromeda are probably going to be a love-it-or-hate-it act for the most part. Al Necro, for one, sees interesting and original acts as noteworthy provided they don’t play shit that stinks. Iron Scorn is probably not going to get you pumped-up to play rock-god, playing shit solos like Yngwie. And, Iron Scorn is probably not going to get you an American Idol recording contract and shit, but that’s what it’s all about, heathens. We live for extreme music that hasn’t been done n times over. When you hear Legion of Andromeda’s Iron Scorn, just imagine red smoke coming from a stage full of candles and human skulls, guys headbanging like their beer was laced, and a vocalist trying to tear his larynx into splinters, and you’ll get that same psychotic feeling we all get when we hear cvlt music coming out of the speakers. Iron Scorn is deranged, but subdued, like a serial killer in a straight-jacket after he’s been given 1000 ccs of Lorazepam, still rockin’, still seething; so bitches, come out and give these guys some posers to have for breakfast.