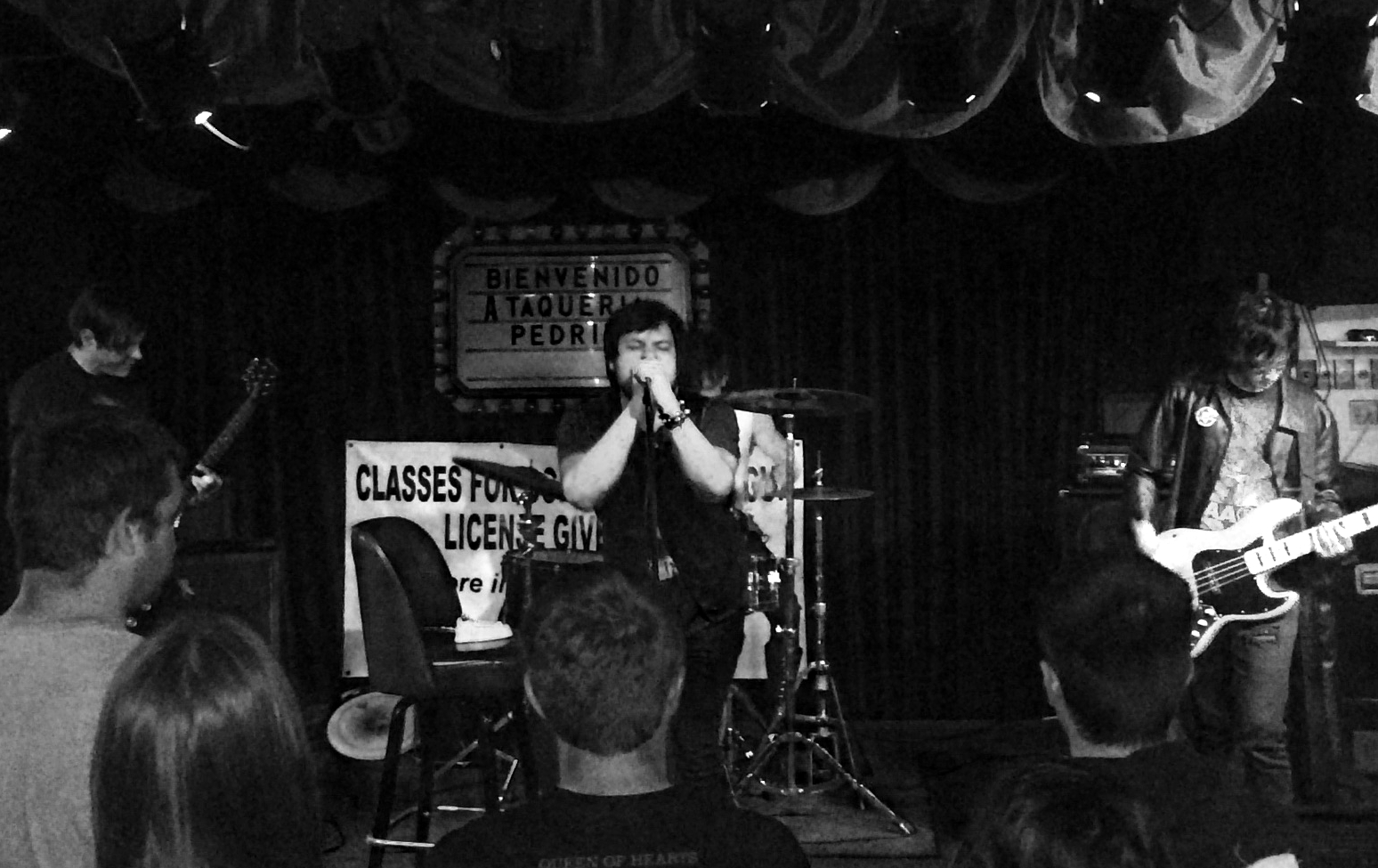 Slimy Member are a four piece dark punk act from Dallas, Texas, founded in late 2013. Their name obviously comes from the title of a song on Rudimentary Peni’s seminal “Death Church” LP. Now, Rudimentary Peni are one of my favorite bands and one of the most insanely good bands of whatever genre you want to place them in (Anarchopunk? Deathrock? 80s hardcore punk? None/all of the above?). Just like their forebears, Slimy Member play a foul, freshly-rotten-from-the-tombs, foetid style of anarcho-deathrock-influenced schizo-punk that is at some points mid-tempo – even downright Sabbath-y or doomy, when it wants to be – and at other times spastic, frenetic, paranoid, out of control.

Slimy Member’s, er, members are all in a gazillion other Dallas bands at any given moment, it seems like: Lacerations, Parantumaton, and Steel Bearing Hand, to name a few. Their amazing demo below was recorded this past Summer. It’s stream-able here, but at Bandcamp you can choose to download it for free (i.e. “Name Your Price” – $0). I’ve had the pleasure of seeing them play three Dallas-Fort Worth-area shows so far: Once in Denton with Finnish postpunk band Kuudes Silma, and once in Dallas with fellow dark Texans Annex. The first time I saw them was at their debut show last Spring at Taqueria Pedritos. Their performances have always been powerful, and while a lot of bands’ first shows can be wobbly and the musicians seem like they’re suffering from a lack of confidence, Slimy Member were tighter than a bolted coffin lid from the get-go. They’ve remained that way each of the times that I’ve seen them. Their subject matter, again as with Rudimentary Peni, alternates between the political and the macabre, and even the purely social commentary stuff comes filtered through a kind of graveyard fog of Lovecraftian allegory that recalls their kindred spirits in the creepy occult-obsessed anarcho-punk band Part 1. Or the Sinyx. A song like “Flesh and Blood” is pretty much a perfect deathy punk/deathrock song, while track 2, “Prisoner,” is an uptempo rager that recalls early 80s Southern California punk, like early TSOL or maybe even a hint of Final Conflict. The band as a whole is powered by a rhythm section schooled on Scandinavian and Japanese hardcore, but this is not a d-beat band; rather, it’s a more measured and deliberate approach to punk that successfully tries to capture the vibe of the darker side of UK anarcho-punk. Track 4, “Sacrifice,” for example, employs a gothy flanger on the guitar and drummer Matt Preston’s heavy-on-the-toms style recalls the tribal style of drumming used by a lot of British proto-goth/”Positive punk” bands. “Slaughter the Pigs” is a tad reminiscent of Rudimentary Peni’s “Hearse.” The demo is a great mix of songs for folks who like the muddled middle ground between early Southern California hardcore punk, deathrock, and 80s British anarcho-punk.

Highly recommended, and I hope to hear more from this gang soon.