This has been brewing a while. It’s been three years since Year of No Light’s last full-length Ausserwelt and in that time the French soundsmiths have crafted out a new niche for themselves thanks to their collaborative record with thisquietarmy and a split LP with Altar of Plagues. Vampyr sees the band continue an intriguing metamorphosis that began to take place with Ausserwelt, their first album with the current line-up and one that saw them go entirely instrumental, trading vocals in for more layered guitars and a second drummer.

The band’s penchant for monolithic riffs has been toned down here a little bit in favour of more sleek ambient flourishes, which have become their focus on Vampyr. That said, the album still bears a thematic and atmospheric comradeship with Ausserwelt. In fact, Vampyr was penned around the same time in 2009 and 2010 and was intended as a live score to a silent film of the same name. You can see similarities in the track titles to Ausserwelt but most tellingly, Vampyr explores the more subdued elements of its predecessor.

Vampyr has shorter tracks and more serene components, which exhibit Year of No Light at their most solemn. The spectral guitars that glimmer through darker, haunting shades of atmospherics are somewhat reminiscent of Braveyoung’s recent output while at sporadic moments, Year of No Light will break the mould with some of their trademark earth shattering droning doom, if only for a moment to wake you from your reverie.

The opening of ‘Generique’ and ‘Courtempierre’ lets in a hazy mist at first as gentle whirrs of electronics begin to fizzle and guitars start prodding through ever so slightly. It’s with the nine minute ‘Ombres’ that Year of No Light begin the twists and turns of Vampyr, with simply beautiful chiming guitars that soon begin to gather in pace and intensity alongside the tribal-like drums that eventually gives way to a droning wave of noise. It serves as proof of the band’s ability to gently and slowly move between two extremes while always holding you in the palm of their hand.

It’s then with the track ‘Vampire’ that Year of No Light brings a hail of sludgy doom into the mix that plucks a note or two from Ausserwelt and its jolt and reverberation are utterly stunning, marking an important turning point in the record with next song ‘Morsure’, where the spectral guitars become more pronounced and the mood decidedly more morose.

‘Malediction’ maintains a funereal vibe with imposing piano notes playing off the lowly strum of a guitar. It’s a theme that recurs with ‘Saignee/Revelations’ and attests to the album’s elegant conceptual flow and from here, the moods plunges even further into a deeper, darker abyss.

Third last track ‘Outremonde (Hierophante)’ begins one last voyage to end Vampyr, where the band make a concerted effort to tear down the serenely constructed walls that were put up around this record. Bricks come crumbling down thanks to the colossal drone doom riffs and the unnervingly pulsating bass line juddering underneath, giving way to the noisy refrains of ‘Profanation/Redemption’.

But it’s with ‘Oree (Abbesse)’ that the band brings this album, or score, to an otherworldly climax and endnote, with frantic drumming to combat the slower pace that mostly characterised the album and much like the end of Ausserwelt, Vampyr concludes on a staggering high.

This may only be the precursor to the band’s next fully fledged album, Tocsin, later this year but Vampyr is still a stunning piece of work from the Frenchmen that stands entirely on its own. 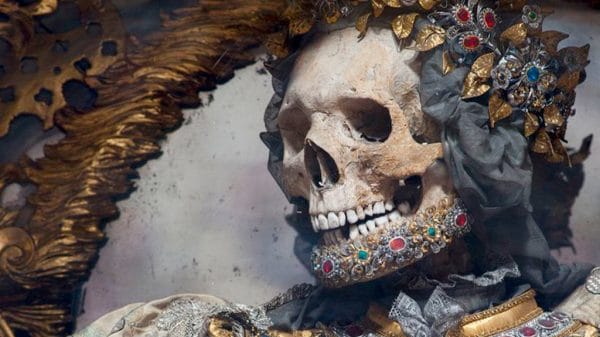 After almost 10 years of covering music for CVLT Nation, I can tell you one thing: I’m fucking sick and tired of people who...