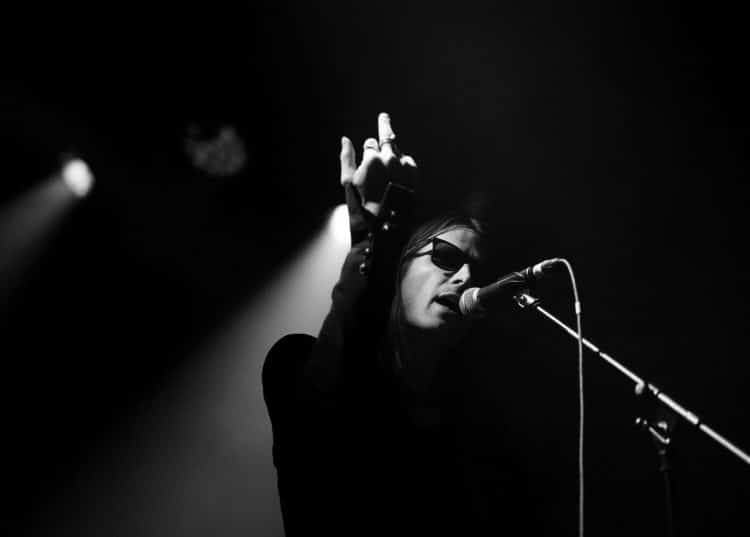 Photos and Text by Charles Nickles, aka Kid Swinging

My mom is dead, my dog is dead and Gen is in the ER.

What the fuck, man?

But I came out tonight regardless to see and hear and disappear a few hours of this already so traitorous year because I’m nothing if there’s not music.

I think about COMME des GARÇONS a lot, which is funny because (much to the chagrin of my three nearest and dearest) I really don’t know fuck all about fashion.

I mean, I remember once coveting this pair of Steve McQueen shoes that were white and charred and, like, $900 and Melissa has taught me to appreciate the sculptural nature of tops but – for the most part – I am lost to style.

I mean, the label and its founder Rei Kawakubo are forcibly arrogant and willfully obtuse, routinely producing works that are maddeningly inaccessible but aesthetically arresting, imbued with a savage love of black and a deep sense of philosophical purpose that flirts with a sublime sense of self-empowered nihilism.

And in their most recent runway reveille, “Embracing Beauty in the Dark,” COMME des GARÇONS tapped the L.A. nee Aussie duo VOWWS to punctuate their VERY fuck-the-binary Homme Plus collection with a decidedly sun-stroked brand of death pop.

By all accounts, the pairing made perfect sense (bleak to bleak, pretty ugly/ugly pretty) just like it makes perfect sense for the duo to open this long, bitter night of bleak, beatific indulgence. Not to say VOWWS are any manner of appetizer or wanton collaborator. Their work is shadowy, swooning and succinct as any shade of grey and though I did wish we didn’t have to make our introductions in such a grandiose space I am more than happy to wash in their maudlin punctuation.

This feels like a test or some sort of art school argument.

I love it, of course, because I’ve been breaking on a bent since August (if not two years) and lord KNOWS when I’ll be coming back again.

Maybe this monochromatic Munchausen is all I’ll ever be.

I mean, we all knew I’d never really make it Quixote and the Sancho Panza lifestyle is for the fucking birds but the Baron? The Baron is and will always be the hot shit for a minute (if not more) so long as his story never checks which it will, of course, but whatever with that becuase truth – though not relative in the slightest – can be denuded and derided with a consistent commitment to the postmodern narrative which implies that all being is effusive and maybe I’m and maybe I’m wrong and maybe by the time the Sandman calls his crook I’ll be bald and suffering the almighty again.

Tonight, however, I’m godless and whispering to ghosts while ADULT. (period essential) crack the black sky with a well-manicured fury, shivering twenty years of agit pop like some Suicide Siosxsie review, lolling in the smoking gag and waxing moon with a wailing pomp and hiss that chokes just enough light out of the abyss to make all this death feel a little…sexy ?

And that gives me hope which is silly, I know, but middling around all impotent in woe can start to feel real pitiful real quick and I really just don’t have the time for it so I’ll take their pulsing prowl as medicine if not purpose and hope against hope I can take that fuck rite of theirs and let it shine on a little in me.

The last time I saw Cold Cave it was Wes, Amy and Max G. Morton at Vitus and though it was clear the band was moving deeper and deeper into the sullen ink there was still a spark of torment, some punk RAWK albatross that flipped that show from Bank trope to Bat Cave blowout.

Bodies crashed. Fists landed. Hell came howling for one and all.

But that was then and this is now.

And now is Cold Cave in the big, black time.

And of course I miss the intimate rage. Hell, I even miss the martial suites of Texas, 2011 when Dom played the crowd like an anti-rave but as K. Jonson Esq. once told me so succinctly “You can’t keep playing angry forever.”

That’s not to say that Cold Cave have yielded their ire over completely or that their audience has turned into a listless cabal of limp-locked cobalt devotees but tonight is 100% the goth/synth/cold/pop/wave I so so SO wished my mom would’ve let me go get cloven and weird with my cousin at when I was a kid.

The snarling bark has settled squarely into a levelled, baritone croon. The synthetic crash has eased into a beat, a pulse that carries one tune to the next with the bounding panache of a Depeche Mode backtrack circa ’92 which is strange because, at this gig, Cold Cave is playing as a fully (mostly) organic band. There’s a drummer, a guitar and a bass. Wes and Amy are front and center, of course, and their keys dance like a fishnet love story but there’s a fucking BAND up there, man!

And as the night slinks on it becomes clear that they are a welcome (if wholly unexpected) addition to the Cold Cave sound.

I mean, the synths are still the principle instruments (bass and guitar are often dropped for supplemental keys) but the addition of strings to the sound gives Cold Cave a new timeless accent and suggests that, perhaps, as the band grows their already impressive oeuvre their melodies might expand beyond the bedroom and into the basement.

Or maybe they won’t.

Maybe the next Cold Cave performance will be a solo noise set or feature Balinese polyrhythms or the Electric Masada horn section or just be three and a half hours of Alvin Lucier interpretations.

Wes Eisold has a way of blooming unexpectedly.

But here tonight, among the thousands, Mr. Eisold seems full as can be, staking his claim as the crown prince of Stygian ardor, the sultan of bombastic woe, the broke leather bad boy with a heart of fool’s gold holding proud the dumb truth that though we are lonely, we need never be alone.