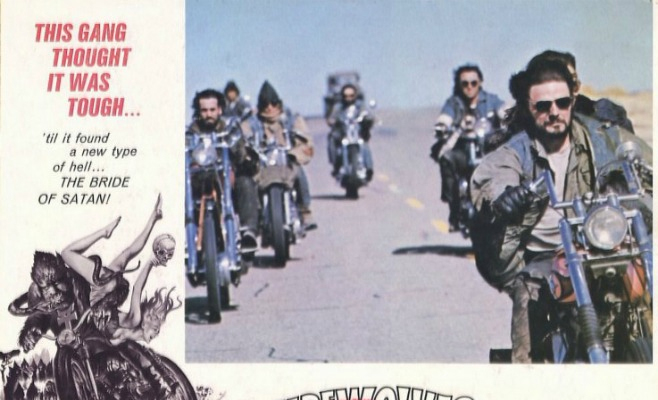 Let me start off by saying the only good neo-grindhouse/exploitation films in my collection are Death Proof and Black Dynamite. No reference to that Robert Rodriguez crap buffet will be found in the following text, amen to that.

When you think of biker movies, you think of Easy Rider, which is fine; however, not this movie. None of that romantic freedom of the road, lets’ drop acid and soar, hombre, nonsense is here. Because real bikers roam in packs like wolves and adhere to the freedom of being outlaws. They are dirty marauders with their sweaty mama’s mounted on top chopped down motorcycles, screaming down the road from town to town, with little in their opposition except for Johnny Law or some rival crew.

So what could be better than throwing an outlaw motorcycle club into a supernatural horror story? What would it be called?… Werewolves on Wheels was released in 1971 directed by Michel Levesque and starred Stephen Oliver (Motorpsycho), Billy Gray (Father Knows Best) and a whole bunch of people you won’t know.

The first thing I have to make note of is that the soundtrack is great. For having no budget, they were lucky enough to get some nice music. If this were made nowadays, it would be the typical over-produced dreck that we have been desensitized, neutered and subverted into liking. The actors here look like they haven’t showered in days. They even filmed actual bikers going about their day normally, giving it an almost documentary feel.

The story is simple, and I like simple when it is done right. The movie follows the Devils Advocates M.C. as they ride down the highway and stumble upon a church and a strange cult. The devotees offer them food and drink laced with drugs that place the members under a deep sleep. The high priest then uses black magic to turn the girlfriend of one of our merry band of delinquents into a werewolf, who later infects her man with the condition. As the story progresses, one by one, every night while the Advocates slept, members of the club go missing. I won’t tell you the rest. You‘ll just have to see for yourself.

Don’t complain about the quality; don’t bitch about the acting; stop being reluctant because you think it’s dated. They made this movie with a very small budget in the 70’s, so what are you expecting? Only thing you should accept is a kick ass movie with freaking werewolves in denim riding motorcycles from satanic monks in robes. Now cook your meth and burn it slow, you hear. The curtains are parting and the road appears under the hot yellow sun. The film begins…

Sam HaiNe is a writer originally from New York who writes flash fiction and short stories. He has released two spoken word albums and is a contributing writer for NewRetroWave.com‘s movie segment.