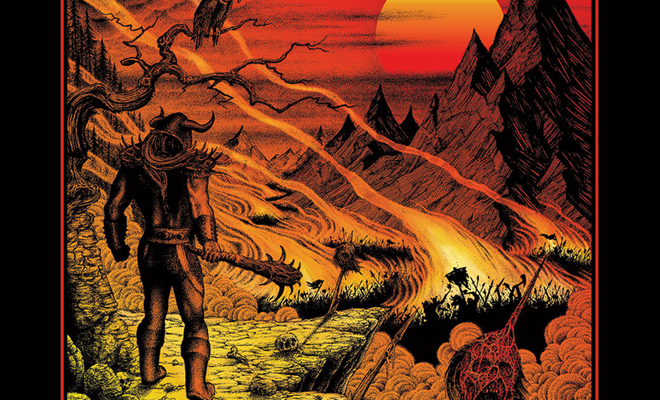 Warmaster is a band from Houston, TX, and their latest four-track album, Blood Dawn, continues their trend of quality releases.

The cover art might lure some metal fans to think of J.R.R Tolkien, but there are no flutes, fiddles or elf music to be found here.  It’s old-school death metal, more like the Massacre variety than the Infester To The Depths, In Degradation – the lo-fi, superdowntuned trend making the rounds of underground labels today.  The riffs sound thick and meaty, and the solos sound like they have the echo effect, giving the album a timeless appeal.

All four songs are catchy, albeit for their riffs, not for bubblegum choruses.  The songwriting displays diversity, changing tempos, and short breakdowns for the all-out headbang fest.

The first song, Bastard Horde, starts things appropriately, without unnecessary filler material for an intro.  In fact, at 1:21 of that first track, you might start trashing your living room without the faintest clue of what’s happening.  Call it a case of Mosh Madness.

The riffs don’t hone-in on one thing like chugga-chugga, or sixth-string shredding throughout the duration of songs.  There aren’t many blast sections, but the mostly mid-to-fast tempos never sound overdone.  I’ve listened to this album over and over for long stretches these past four days, and the album is done so well I can hardly think of any complaints.  If listening to Blood Dawn doesn’t perk your ears the first time you listen to it, give it a few more spins as this record grows on you.

The production is clean and the bass rumbles amidst the dense rhythm section so that the music doesn’t sound like a record done by a death metal band in-love with the Norwegian black metal scene.  The sound doesn’t ooze like black tar the way some death metal bands do nowadays but the riffs still sound killer.  There’s a good dose of groove and the slow jams will get a nod from meth addicts and stoners alike.

The drummer doesn’t play gymnast, but locks-in the pulse of the music with a no-nonsense style that can be described as “proper.”  The drummer uses rudiments with double-bass blasts at times, and his overall performance is noteworthy.  Some guitar solos are comprised of sustained notes that end with screeches and whammy bar vibratos, accentuating the music to keep the songs from going stale.

The growls stay in the lower register.  You can’t tell what he’s sayin’ but the growls seem perfectly timed with the rest of the music.

It feels like you’ve taken a beating at the end of the album; just four tracks long, sometimes pummeling when fast, sometimes crushingly heavy when slow.  If you’re looking for a good death metal album to play on repeat for hours on end where you’ll still be willing to listen to it after some time has passed, try Warmaster‘s Blood Dawn for a good, healthy, cathartic gang-against-one-man beatdown that’s sure to be addictive.