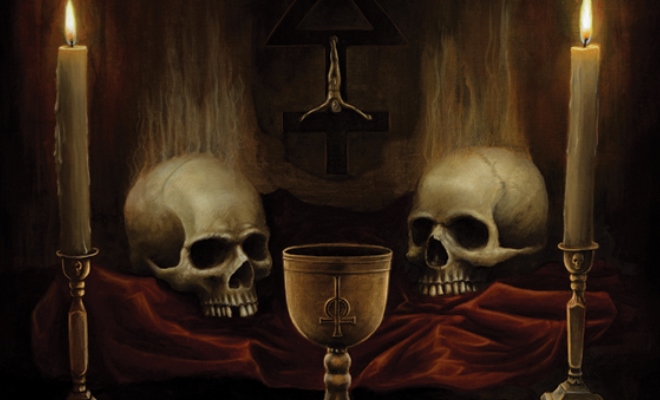 Sweden and death metal. It doesn’t exactly need reiterating, but with the wave of death metal from different shores and lands, especially in southern and eastern Europe and pockets of the US delivering some stellar works, our northern brethren won’t allow themselves to be forgotten in the mix. Just ask Tribulation and Morbus Chron. So where do Vanhelgd fit in?

The death metal troupe has been keeping sound company for their first couple of releases, coming out via the likes of 20 Buck Spin, Pulverised Records and Nuclear War Now. Relics of Sulphur Salvation is the band’s fourth album and a pretty straight forward death metal statement, if erring on the side of the conventional.

Vanhelgd have a strong grasp on dynamics and pace, swaying between searing blasted passages and a more mid-paced trudge, even with a crusty edge at times that pays homage to Bolt Thrower. Look no further than the eerie and grimy tones of album opener ‘Dödens Maskätna Anlete’ and ‘May the Worms Have Mercy on My Flesh’ for proof.

They seem at their most comfortable, though, with blazing speeds and fiercely unrelenting tremolo riffing. As the album progresses the band get more comfortably into their groove and the quality of the songs themselves grows with it.

The title track is evidence, with fiery guitars soaked in Swedish DM tradition, while vocalist Mattias “Flesh” Frisk reaches a slightly higher pitch in his vocals, almost black metal-like, but never loses its death metal edge, even while tinkering with vague d-beat-esque drumming in between the blasts.

Vanhelgd seem content with their brand of death metal, though it never strays too far from the beaten path throughout its 40 minutes or so.

In a densely populated DM world right now, Vanhelgd may find it difficult to truly step out of the shade and be noticed. Nevertheless, Relics of Sulphur Salvation is a heady brew of no-nonsense Swedish death metal.