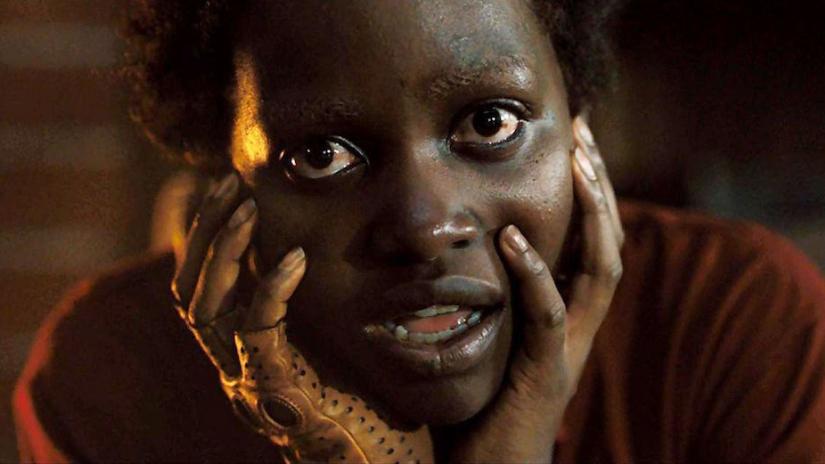 Us – The Duality of Terror – A Review

Us is the new horror film by Jordan Peele, the creator of last year’s Get Out, a surprise hit that even made a run at the Oscar’s. With his new film, Peele embraces even more social commentary and quite effectively mines the soul for new ways to reflect the horror that lives inside of us all.

The film stars Lupita Nyong’o as family matriarch Adelaide, who is going along with her family (husband, teen daughter, young son) for a vacation near Santa Cruz, California, a scene where she experienced great trauma in her past as a child. For most of the movie, Adelaide is stricken with and paralyzed by fear and what we come to see as a form of PTSD. Something happened to her there on the Boardwalk, something terrible, and now it seems that her returning to the scene has triggered the beginning of something even more horrifying. That night, after a nerve-jarring trip to the beach, Adelaide and her family are beset by a group of strangers, a family that mirrors their nuclear make-up, who are standing in the driveway, just staring. Until the youngest scuttles away into the brush, the daughter sprints behind some trees, and the lumbering father stalks towards the house. From there, things get worse, much worse.

To avoid spoilers, I can’t go into a lot of plot details from that point on. Let’s just put it this way: Adelaide and each of her family are forced to deal with their doppelgangers, and group of people that are exactly like them but raised in, uh, less fortunate circumstances. They are forced to deal with what they could have turned out to be, even as this reckoning is thirsting for their blood. A lot is going on here, from an examination of the family as a nuclear unit, to the examination of a Black family dealing with a threat to their existence, to the nature of duality in humankind, and much, much more, including middle class fears of a structured society falling to bits around them. Beyond that, there’s a ton of suspense, loads of thrilling moments, and plenty of bloodshed. The struggle is real, and it’s here, in the second act of the film, where Peele really flexes his muscles, going from scene to scene of increasing terror and horror, each moment building on the one before it, until we barrel through to the other side, and the third act begins, and we finally (literally) see some sunlight at the end of this harrowing experience. It’s also in this third act where the movie lost me some, and slipped from being a killer new classic to just a really goddamned good horror film.

There is an explanation given for the events and, depending on how it hits you, you’re either in or you’re like me, scratching my head, going “Huh?” I won’t spoil the specifics, but I was left with more nagging questions than answers, which is all good I suppose but it was a little too distracting for me. Also, the film veers almost totally towards Adelaide in the final act, and that was disappointing to me because I really enjoyed watching the family dynamic and how the group struggled, both individually and together, to overcome their obstacles. To be fair, the film started with Adelaide as a child and ends with her as an adult, and the narrative is clean and smooth and totally justified. I just missed the Dad and kids.

So is this a movie I would recommend? Hell yes. It’s full of chills and screams and a few jumps. It’s full of action and suspense and blood-letting. The acting by the entire cast is stellar. There are moments where you will be at the edge of your seat and others where you’ll be pushed back in that same seat, dreading what is to come. In short, it’s a damn fine horror film. Go see it before it gets spoiled, and go see it again to straighten some of the curves. Another excellent release by Jordan Peele and company.