“I’d been to my first gig, The Clash in Lewisham, a month before which was pretty mind-altering and then to follow that with this experience was something else.”

“As it’s Mother’s Day we’d like to dedicate this to all the absent mothers of the young boys here tonight. I’m sure if they were here tonight they’d wonder if was worth all the money they’re paying.”

On a Sunday in 1980, Throbbing Gristle gave an hour-long performance before 70-or-so teenage boys and a few teachers at Oundle School in Northamptonshire.

Chris Carter, the late Peter “Sleazy” Christopherson, Genesis P. Orridge and Cosey Fanni Tutti were booked by 17-year-old pupil Nigel Jacklin, who had previously corresponded with P. Orridge. As head of the boarding school’s “Rock Soc”, Jacklin was entitled to choose one band a year to play a concert there and apparently hoodwinked teachers by telling them that TG’s music was akin to that of minimalist composer John Cage.

My friend the screenwriter Nick Vivian, then 15, was among the boarders in the audience. His belief that the event was “life-changing” is borne out by the extraordinary scenes in the film TG made of the gig, which also included footage shot in the medieval town and in the school grounds.

“They played in the Great Hall, the same place where we had whole school assemblies, speech day, public exams, etc,” says Nick. “I’d been to my first gig, The Clash in Lewisham, a month before which was pretty mind-altering and then to follow that with this experience was something else.”

While some students responded well, and there were wolf-whistles (complimentary) for Fanni Tutti and (derisory) for P.Orridge, others were horrified; at one stage a group started singing Blake’s Jerusalem as a protest against what they were seeing and hearing.

TG viewed the Oundle performance as among their best. “They went crazy,” P.Orridge later recalled. “The little ones from prep school were there, and because they had no preconceptions and just felt the energy of the sound, they loved it. I think some of the teachers were a little confused.”

View a taster of the performance with footage shot by TG at the school and in its grounds here and below: 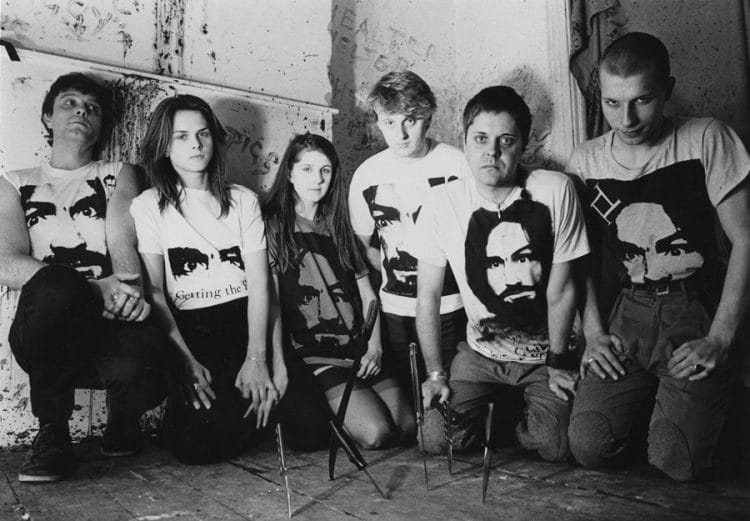