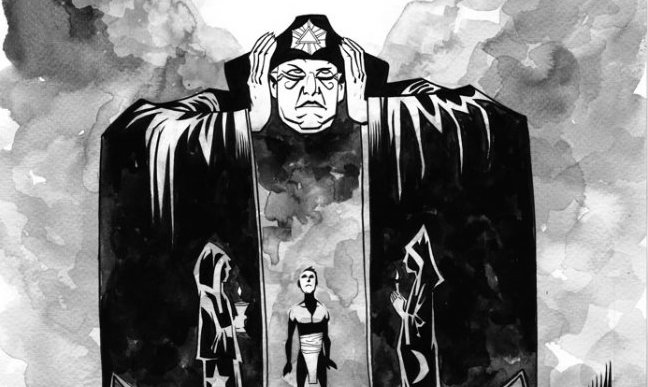 I intended to write a review of the Dark Horse graphic novel Aleister & Adolf, but soon I realized that it had to be more than just that, as the message in the graphic novel by Douglas Rushkoff and illustrated by Michael Avon Oeming is just too powerful and meaningful in this age. But first, a synopsis: Graphic designer Hugh is puzzled by the strange behavior of the company’s logos as he tries to work with them in his computer. He tries then to get the originals from the company’s archives, but the archivist mysteriously points him to the original logo designer, an old man known as Roberts who’s lying in a hospital dying from cancer. When he arrives, and asks Roberts about the logos, he replies with a story of espionage and magick, a war of symbols of power between none other than British occultist Aleister Crowley and Nazi führer Adolf Hitler, a war of Eros against Thanathos. What Hugh learns after this is a secret that horrifies him.

The main theme here is the power of symbols, their magickal power, indeed. Symbols can work in our unconsciousness in ways we don’t even notice, there are examples everywhere in our daily life. Consider all the different brands, logos and slogans (written language is also symbols) and what we associate with them, comfort, luxury, money, power, sex, etc.

According to author John Michael Greer in his groundbreaking book The Blood of The Earth, there are two types of magick. But before we go further, what’s magick? According to Aleister Crowley: “the Science and Art of causing Change to occur in conformity with Will” – but what does this mean? I agree with several authors; magick is our innate ability to alter and modify others, and our, perception and consciousness, therefore, it’s not possible to alter the laws of physics, or use arcane forces to bring down your foes with unholy fire, but even then, it can be a useful tool, I would argue that it IS the tool, but that would take an article of its own.

So, returning to Greer’s division on magick:

Where Greer and Rushkoff share a common theme, is the actual use of Thaumaturgy to affect other people’s mind and emotions, unconsciously or deliberately, by corporations, governments and other groups in power. I think this is the message behind the narrative of Aleister & Adolf, and I think this is very important to understand. As an example, just try to analyze advertising and marketing to see how, through the use of symbols as in ceremonial magick and chaos magick sigils, corporations fabricate needs when we don’t need and manipulate our opinions and tastes. What does Greer recommend to break free of these spells? A critic mind, a self-analysis, meditation, and yes, the practice of Theurgy. Am I an advocate of practicing magick? Yes!!!

I highly recommend you give a reading to this wonderful graphic novel and enjoy Oeming’s gorgeous black and white drawing which capture all the mystery and wonder of this secretive magical war. If you want to get it, go to Dark Horse Comics

Also, if you want to read John Michael Greer’s The Blood of The Earth, you can find it at Scarlet Imprint.