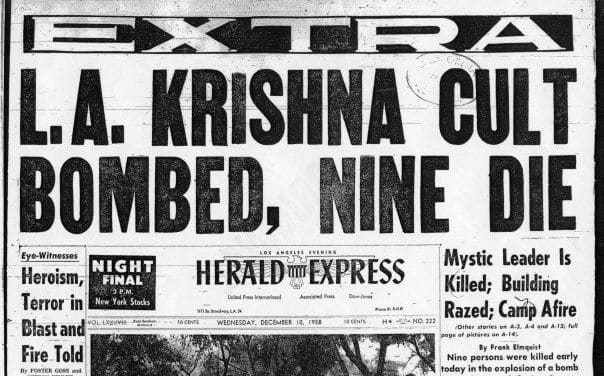 This feature via L.A. Weekly

It was a little after 2 a.m. on December 10, 1958. One minute Dorothy Hamm was snug asleep in her bed, the next she was wide awake, having been thrown to the ground by some powerful explosion. She ran outside and saw a “wall of flame gushing over the crest of a hill” about a mile away. The sound of screaming and crying soared through the whipping wind. Dorothy ran into her house and called the police.

Closer to the scene, a young woman who called herself Sister Barbara had also been jarred awake by the explosion. Sister Barbara was a member of the World Knowledge Faith Love Fountain of the World cult, and had been sleeping in her dormitory at the group’s rustic 20-acre compound in Box Canyon, outside of Chatsworth. “I looked out the window and saw the reflection of flames all over the hillside,” she would later recall. “I said, ‘Oh, look out there. It’s positively beautiful out there.’ By that time Priest Leta woke up and said, ‘I think we’d better find out what that beautiful is coming from.’”

The answer would change their lives forever.

The W.K.F.L. Fountain of the World was founded in 1948. Its leader was a man who called himself Krishna Venta. Venta, who was called “the Master” by his 100-odd followers, was a handsome charismatic. His long hair and beard, yellow robes and dirty, bare-feet were used by his followers as proof that he was, as he said, the reincarnation of Christ. On the surface, Venta was a proto-new-age hippie who preached equality, service and tolerance. But in reality, he was a far more nefarious figure, both in his doctrines and in his actions.

Krishna was born Francis Herman Pencovic in San Francisco in 1911. Of Jewish-Russian descent, Pencovic took to the rails as a teenager, bumming all over Depression-era America. He was arrested for numerous small crimes, including burglary, check fraud and, most disturbingly, writing threatening letters to President Roosevelt. In 1937, he married a woman named Lucyle, who gave birth to two sons. He worked odd jobs in the shipyards of Oakland and as a boiler maker in Berkeley. He also spent time in jail and a mental institution. After divorcing Lucyle and briefly joining the Army, Pencovic met his second wife, Ruth, in Salt Lake City in 1946. They would go on to have six children.

1946 seems to have been a pivotal year in the life of Pencovic. While in the Pacific Northwest, he became fascinated with the Mormon religion, particularly its belief in the “Melchizedek Priesthood.” He came to believe that his body had become host to “Christ Everlasting,” whose soul “had commandeered to Earth from the planet Neophrates on a convoy of rocket ships whose passengers included Adam and Eve.” He claimed to have no visible navel, changed his name to Krishna Venta, altered his appearance to look more “Christ-like” and began to tour the country giving lectures outlining his expanding, meandering theology.

Along the way, Venta and his wife, now called Sister Ruth, attracted a small number of followers. Followers turned over all possessions and money to the group, grew their hair and beards long, dropped their surnames and went barefoot “as a symbol of service and humility.” They also wore robes of various colors, each denoting their rank and skills. Nurses wore blue, kitchen workers wore brown, students wore green and so on. They lived their lives based on the teachings of the Ten Commandments and Krishna’s Eleven Tenants, outlined in one of many promotional leaflets distributed by the group:

The Fountain way of life — or should we say philosophy — is consolidated in a brief manner in the 11 rules.

1. To forget the outside world.
2. To become familiar with the inside workings of one’s self.
3. To become unified with one another spiritually, mentally and physically.
4. To forget self.
5. To create a desire within one’s self toward higher spiritual equality.
6. To obtain wisdom.
7. To search for understanding in all things.
8. To face problems without thought of escape.
9. To become absorbed in love toward all things, seen and unseen, and so fulfill the laws of God.
10. To let the spirt descend upon you.
11. To become a teacher, not in the world, but in the Fountain, that all men who come out of the world shall find comfort in our midst.

In 1949, the growing group of “Fountaineers” bought around 20 acres of forlorn land in a glen of the Santa Susana Mountains off Box Canyon Road. This otherworldly land, dotted with sycamores, oaks, large boulders and caves, had formerly been inhabited by the Berry family, who had fashioned one of the large caves on the property into a functioning home. Venta lived in this cave for a time, until the men of the commune built more permanent structures. Soon, a large sign (still existent today) greeted visitors: “Ye who enter here enter in upon holy ground.” Sister Barbara described the small community as it appeared in 1954:

The Fountain was a large acreage with many different buildings on it. There was a dormitory for men and one for women. The main building had an upper and lower dining area, then a hobby room, kitchen and two fireplaces. We even had two trees that grew right in the buildings and up through the roof. The brothers had constructed the buildings out of large rocks, wood and glass … the lower dining area doubled as the church on Sunday and as a theater on Saturday nights. There was no grass on the property, just packed dirt, so that being barefoot was no problem. There were lots of trees, and the temperature, being southern California, was just right.

The men and women of the commune worked six days a week, living the hard and meager life of subsistence farming pioneers, while Venta toured everywhere from Europe to South America, attempting to convert more sheep to the flock. Children were raised communally but sent to local schools, and the group ate a primarily vegetarian diet. They became part of the local community, participating in holiday parades, distributing a Fountain newspaper and sending their choir to entertain folks in the area.

The Fountain was considered harmless by their rural neighbors, who often gave them extra food on visits to the compound, which was surprisingly open to all visitors and guests. Neighbors attended the Fountain’s Four Holy Days, starting on March 29, during which time Christmas, Easter and the Resurrection, and all Fountain marriages were celebrated. The group was considered so benign that there wasn’t even much of a fuss when Venta was “crucified” each year, complete with fake blood and stigmata, as part of the annual Resurrection pageant.

In this article:Featured, krishna cult, Man/Son, W.K.F.L. Fountain of the World

It was by pure accident really that I stumbled upon San Diego artist David Van Gough. While nursing a hangover at home one day...