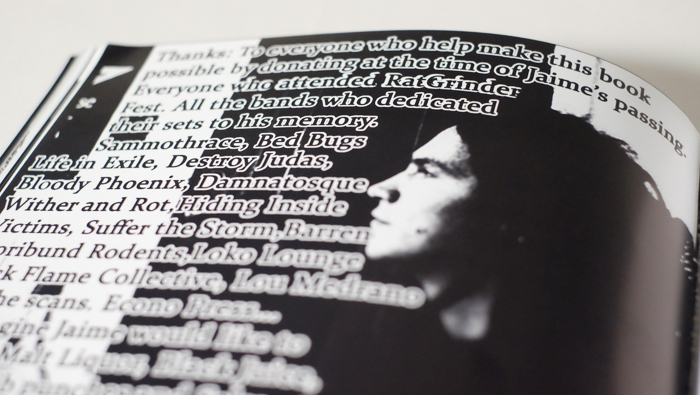 The art of Ratgrinder, aka Jaime Abrahamson, screams out and fights against human suffering. Something about the lines in his artwork rebels against the system with each stroke of his pen. When you look at his work, you know for a fact that this human has been a part of the crust scene for years and his revolutionary spirit runs through his veins. In the past, Ratgrinder has created illustrations for some of my favorite bands, like SANCTUM and AGAINST EMPIRE. What I respect about his work is the way it’s full of empathy, and at the same time, filth. Ratgrinder represents the artists who do what they do because they have no other choice; it keeps them sane, and they hate the system that corrupts this world! On Sept. 28th, 2013, Jaime took his own life, but will live on through his art and in the hearts of his friends and loved ones…His brother Shawn & cousin Lacy have put together this beautiful book entitled The Art of Ratgrinder which you can pick up HERE! I feel lucky that I got to meet him, he had a killer smile, plus he was a true artist! Much respect due to Abrahamson family and to all of the Punx who loved him worldwide!