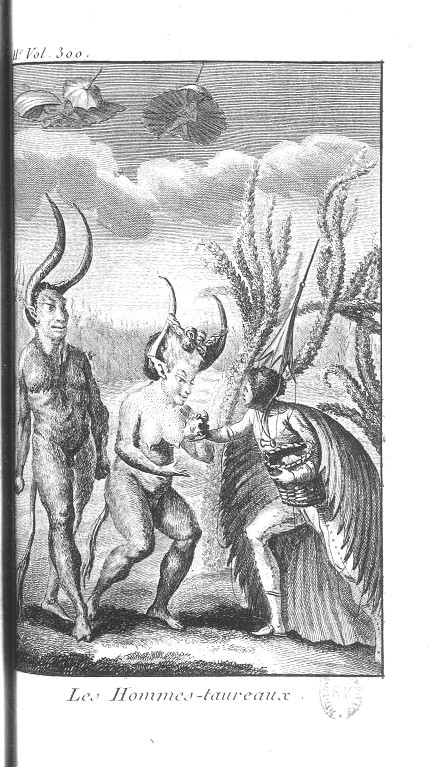 Science fiction says a lot about societal values at the time of its writing. In the latter 20th and 21st centuries, most science fiction sees human beings encountering races of people and aliens who are far advanced of us, beings with whom we must fight or fight off to save our existence. Earlier science fiction seems to take a different tack, one that puts humans at the forefront of technology, discovering a barbarian culture, sometimes on (or in) our own world. I think this can be tied to the European colonial and post-colonial mentalities; we go from an era where we are literally enslaving our fellow man, crushing one culture under the hypocritical weight of another, to one where we are reflecting on the atrocities of the past, and perhaps assuaging our guilt by envisioning the karmic scenario happening on a more universal scale. Southern Discovery by a Flying Man, or The French Dedalus (1781) by Nicolas-Edmé Restif de la Bretonne (1734-1806) was published in the thick of the industrial revolution, but also in pre-revolutionary colonial France, a time when the French were on a centuries-long master campaign of usurping authorities and decimating cultures around the globe. Restif de la Bretonne envisions a land far from Paris – on the exact opposite end of the globe, with the capital Serip – populated by human beings who are more animal than they are human. Not much is known about this book, but from the excerpt and translation I read here, it seems to have been a satire of French colonialism and societal hierarchy. The “Animal People” have laws and value equality; they believe slavery to be wrong and that brotherhood is the most important virtue of a society. Restif de la Bretonne was known as an agitator with his writings, and having published this book only 8 years before the French Revolution, his writings seem to reflect a mindset that was clearly gaining in popularity in France at the time. Like many old works, the illustrations are stunning, and flesh out the story in an eerie and important way. All that is available online is a collection of the illustrations that are now public domain, but the freedom and joy of the Animal People is tangible. Check out the illustrations from Southern Discovery by a Flying Man, or The French Dedalus (1781) below.