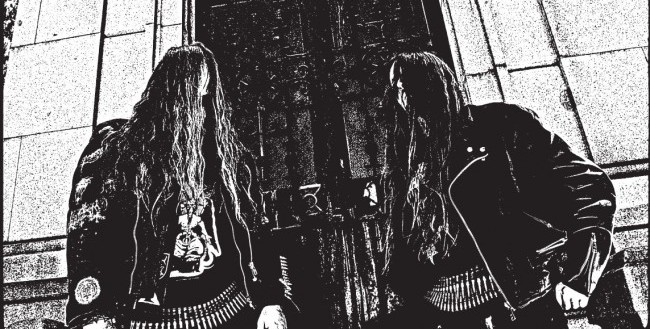 Teitanblood kept it pretty simple when they were deciding on an album title – Death. Its simplicity is key to understanding the MO and approach of the Spanish death metal legion that ruptured the death metal world with Seven Chalices in 2009 and two EPs since then. Death and the horrors and fears it conjures is bountiful on this album in terms of theme and atmosphere and of course sound. Teitanblood play death metal. No one will mistake that.

To say that Death is hefty and enveloping is to do it disservice. At 70 minutes, this album is an overwhelming excursion into the most ghastly of DM, requiring a great deal of commitment and attention from the listener. This is made somewhat easier when compared to Seven Chalices though given that Death is “refined” (word used carefully here) with a slightly better production job that gives the album’s many riffs room to be actually heard. Death still sounds cavernous and murky though and Teitanblood haven’t lost any of their death metal grit and have kept a straight-forward headlong motion throughout the record.

It’s important to note the slew of stellar death metal records and even demos that have come out since Seven Chalices. Grave Miasma, Bölzer and Malthusian have all upped the ante considerably, many of which putting greater attention on the art of the riff while also conjuring atmosphere and character, a difficult line to tow effectively but Teitanblood are getting it right with this album.

“NSK” is wielding a dangerous amount of riffs on this record and where Death doesn’t have the same level of unbridled chaos and muddled aggression that Seven Chalices had, his fret skills carry the record for the most part. But this comes with an extremely hefty low end along with earth rumbling drums from “J” that are unrelenting.

The opener of ‘Anteinferno’ sets that tone straight away with painful cries and squealing lead guitars, erupting right out of the abyss before settling into a routine of juddering drums, murky guitars, and brief assaults of shrieking solos.

It’s the hefty 10 minute ‘Plagues of Forgiveness’ that really grabs one’s attention with the energy of this brew taking a noticeable upswing while ‘Burning in Damnation Fires’ steals the show with easily the album’s best riffing.

The closer ‘Silence of the Great Martyrs’ is a suitable end initially but at 17 minutes and the last 10 minutes of which just being atmospheric creepy crawly samples, it serves little purpose and is somewhat pointless and tacked on at the end. Let the riffs end the album.

One minor complaint aside, Death is death metal with no frills and no experimentation, and unabashedly so. It’s Teitablood doing what Teitanblood do best and to their credit, they can stand shoulder to shoulder with some of the DM’s current elite.