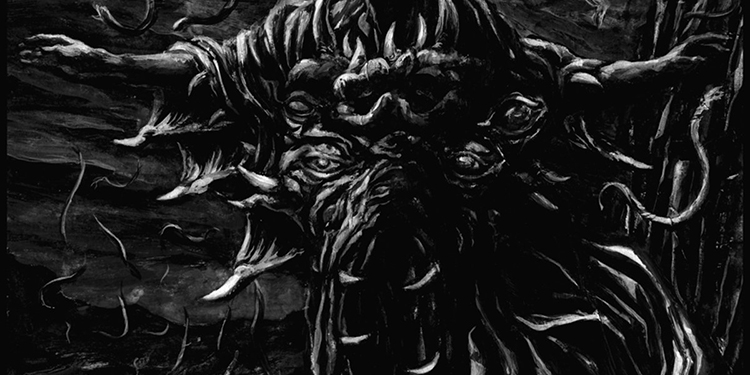 Abruptly emerging from the depths, with no press or hype or teasers, but with just merely a few days warning, Teitanblood, in the waning moments of another dying year have dropped Accursed Skin. The follow up to their ungodly second album Death, this new slab of abominable Black/Death will more than satiate die hard fans of the band, as it features a fourteen minute plus title track and a return appearance of the song “Sanctified Dysecdysis” that appeared on the Woven Black Arteries EP, but never before on vinyl.

Before you ever hit play, the stage is more than set by what can only be called the most impressive piece of dark art to ever grace the cover of a Teitanblood release. Seeing this work alone in the days before its release was more than enough to spark my interest greatly, as it depicts an ominous, faceless figure standing with his arms outstretched, almost entirely draped by a cloak made up of tentacles, jagged teeth, piercing, devilish eyes, and a gaping mouth ready to devour all. Upon receiving my copy in the mail I probably stared at this piece for a good ten minutes, losing myself in its dark folds, its faces within faces, and its nefarious mystique. Good music often announces itself visually with a cover piece that moves you in some way or other and ushers in an ambiguous form of anticipation that cannot be easily put into words and the art adorning Accursed Skin does just that.

The music that follows is hardly the near anti-music crescendo that Death was with its impenetrable intensity, as the title track opens with chords slowly ringing out and upward, as the piece introduces itself with a gradual increase in both speed and dynamics, with vocals and drums joining in, and raising a doomy, monolithic atmosphere of ancient evil that we’ve all come to know and expect from Teitanblood. All this before a riff change at the 3:22 mark shifts things into another gear, bringing about a penetrating lead that seems to set things off like the blowing of a gasket, as the beast that is Teitanblood starts to seethe and stir, all towards an eventual eruption at the 5:34 mark that sees the massive build up begin to unfurl itself in a deadly onslaught of divine power that not surprisingly, only escalates from there.

Hammering blasts and fills galore, Teitanblood traverse and stir up much murk in their delivery and yet, again, in contrast to their last outing, are still much more musical in nature as a pretty catchy riff change around 7:08 is given a fine payoff with a nice little lead soon thereafter that features a good bit of flare and classic edge to it that breathes new life into Accursed Skin for a moment and really jazzes up the dynamic of this sprawling beast. But this is short lived, of course, as Teitanblood so brilliantly use eruptions like these to send you further headlong through the maelstrom, as that towering riff heard at the beginning emerges once more and stands all among all who thought redemption was possible. This deescalation gives needed breath for the conclusion of this massive piece, as Teitanblood burn of a path of destruction in the closing minutes more straight forward and damning in nature, the kind of churning Death Metal aesthetic that levels all who believed for even a moment that the End would be anything other than great and terrible. Ambiance and the slow stirring of black water mark the demise of the foolish herd, unknowingly strangled by the very law they so blindly follow.

And then another tremor is felt. “Sanctified Dysecdysis” opens and as those familiar with the song already know, sends you crashing headlong back into pits once more. Possibly one of Teitanblood’s best songs, I wholeheartedly welcome its return to this release in all its punishing glory. A great counter point to the title track, “Sanctified Dysecdysis” is a bona fide scorcher from start to finish and has all the dynamics of a great Teitanblood song; abominable atmosphere, cataclysmic string eruptions, interesting riff changes, drum fills, and moments of unique transition. It’s all there – all the things a band needs to write the kind of lengthy, hellish hymns that have no real points of melody but are still somehow so engaging, unique, and filled with a mystique and life of their own that you can’t help but find yourself enthralled from start to finish.

And while that is a good description of just about every Teitanblood song, it’s more than apt for “Sanctified Dysecdysis,” as its movements are incredibly well constructed and flow seamlessly. The first four minutes are total onslaught that scale down to the dropping of a pin around the four minute mark and from 4:28 onward the song changes, deescalates the attack, introduces hearty mid-tempo, and then rips you limb from limb with one of those shredding leads that mark a return to darkness and desolation; always another attack, always darker, and stronger than ever, with greater force, and penetrating vision that leaves you destitute. And much like the Lord, Teitanblood, methodically, yet ever abrupt and explosive all at once, tear you down again and again just so they can drag you through the mud one last time.

Almighty and filled with the divine spirit, Accursed Skin is another massive condemnation that no one saw coming and whose weight will be felt in the weeks and months to come. But it will also add to the overall legacy of a band whose echoing cacophonies will resound forever. Unparalleled in style and approach, Teitanblood are still the kings of their craft and simply without equal. SUPPORT!!!