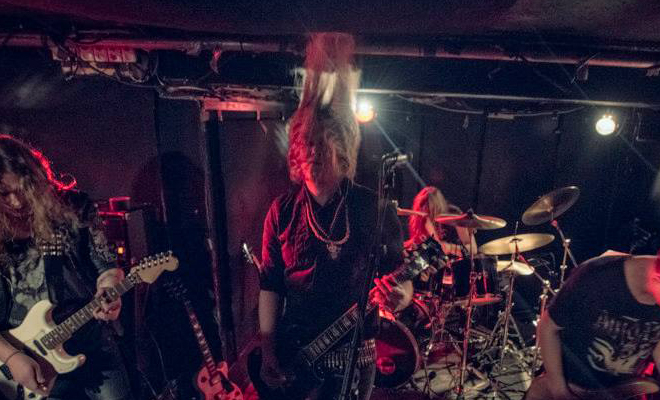 Who are some individual musicians that have inspired you to do what you do?

Individual musicians have not really meant that much to us as a band, it’s more the work of some bands/artists and general atmosphere and feelings that inspire us to do what we do. But musicians like Jimi Hendrix, Tony Iommi, Chris Reifert, Fenriz, Quorthon and Apollyon have been very inspiring and offered guidance in our search of space. Have you ever been to America? If so, how was your experience?

Yes, we did a small East Coast tour in 2010 after we played MDF. We also included Arild and my thrash band Nekromantheon on that bill. It was very cool actually, we mostly have great memories of that tour. We got to play with some very cool bands (Unearthly Trance, Gorephobia, Anvil Bitch, Mutant Supremacy and many more, plus the fantastic bill at MDF). People in the States that we met were genuine music freaks (or just freaks in general), so we had a great time. Looking forward into getting back to touring in March.

Who is your favorite non-metal band?

Magma from France, I guess. We all love them. As for newer stuff, I’m a huge fan of Beastmilk and Chelsea Wolfe. We live in a part of the U.S. where marijuana is legal. How are the laws against marijuana where you live? Is it hard to find it there?

Good for you, hehe. Well, it is illegal here, but the penalty for getting caught with it for personal use is not that heavy, luckily. If you get pinched for distribution/growing, that’s another story though. It’s not that hard to find, but there’s more hash here. Quality can be a bit shit also. But I usually don’t smoke, I rather enjoy a good craft beer or good wine, but I can’t speak for everyone in the band 😉

What kind of gear do you use?

We are not that picky, it just needs to sound raw. R.K (our drummer) uses an old and shady Pearl kit, plus any cymbals he can get his hands on. I think he prefers Paiste and Zildjian cymbals, but he could use some endorsement as he’s constantly smashing them to bits and pieces. Didrik uses an Orange OR-120 (which is in fact mine) on bass, plus some obscure Phazer pedal and a turbo RAT for dist, and he has an old Washburn with brand new Lace pickups. We are gonna start using Lace pickups now; Arild and I have the Lifers in two of our Gibsons, and they sound great. Arild uses Engl Fireball and I use Peavy 6505 with Mullard tubes. I would love to try out a SUNN amp one day though. I see that you recently played in India, how was that?

It was pretty fucking insane. The crowd was wild and enthusiastic on a whole other level than in Europe. It was absolutely great, but also somewhat of a cultural shock to see India. And there were monkeys outside the hotel, haha.

The artwork for “Black Death Horizon” is so rad. Who did it?

Our drummer Kristian did all the artwork and layout. He is the artist among us, he does most of our shirt designs also. Sick fucking mind.

How do you guys make your living when you aren’t rocking and rolling?

I am the head bartender at a rock/metal/punk bar in Oslo, and I go to university, studying political science. The other guys work with different stuff, some have been to the university and others are starting next year.