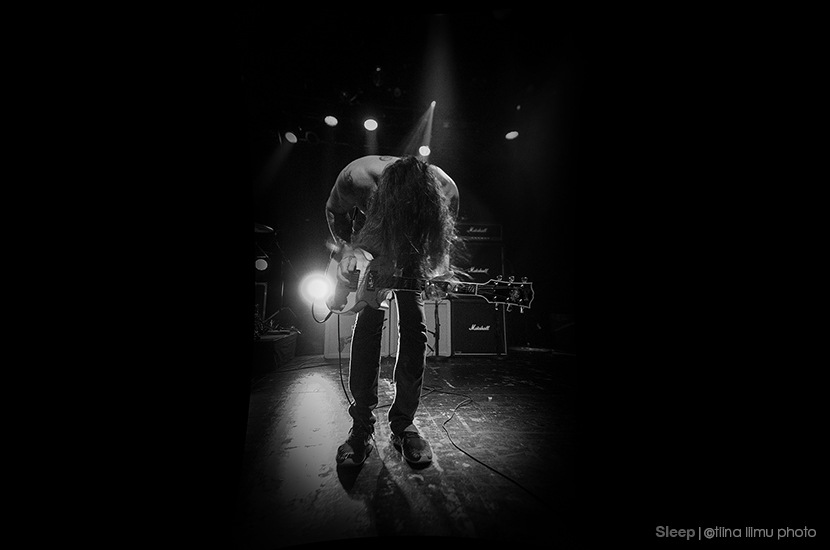 990 Black Sabbath fans can’t be wrong, can they? Talking about Sleep on here is like preaching to the choir, and likewise for the Buddha-faced denim, ink and black-garbed congregation on that February Saturday night. Vancouver’s Commodore Ballroom found itself peaking at capacity as this doom-metal three piece delivered a hefty decibel fix.

Sleep’s track record has always been marked with a rather altered sense of timing, but when things get done, they are done right. That night, Al Cisneros, Matt Pike and Jason Roeder set the stage with a thundering twenty-two minutes of “Dopesmoker.” If you were a little late, don’t sweat it, cause it’s not a grind gig and you weren’t going to miss the whole show, they’re still on the first song (grin).

What followed was “Clarity,” a newly minted 2014 track, and the first output of music for the band in something like twenty years. Extended tuning breaks between songs can be trying; but not in this case, as one awe struck fan pointed out, “it’s a perfect relief from the overwhelming, overwhelming awesome that is Sleep!” There was no shortage of hypnotic riffs for the disciples of the slow and low, by means of a pilgrimage through Holy Mountain and Dopesmoker, which left a room soaked in a contact high of cathartic proportions.