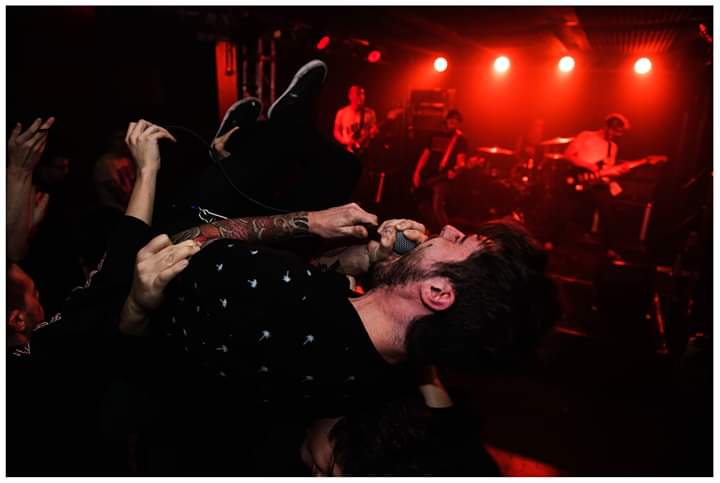 For five guys in Parma, life may be as shittier as ever, but punk-rock definitely isn’t.

If you’re as sick and tired of the hype as these guys seem to be and saturated with punk bands playing the same song over and over again, even if in the most competent fashion but with a noticeable lack of gut, then spin this. Maybe Shitty Life aren’t reinventing the wheel, but sure as shit, they play punk like it if it was happening now.

Forget all that talk about the sense of urgency, because Shitty Life are all about the now hitting you right in the face. And, they got the hooks and the songs to go with it. I dare you to listen to “Isolated Youth,” the first track on their self-titled 2017 record, just once without repeating it hundreds of times. It’s a goddamn ear-worm waiting to happen. In fact, I haven’t listened to it in about a year and just by mentioning it, it’s already playing in my head. Non-stop.

These Italian punks are brash, bold, beautifully cheeky and catchier than syphilis at a 19th-century brothel. At the same time, they’re fast and tight with some garage-rock hints minus the tedious repetition. “Switch of your head”, their 2018 record, plays like an alleluia, especially with songs like “Weirdos.” Lines like “We’re the weirdos, we’re not right” makes you feel ok about not belonging. In fact, it makes you happier to be on the outside looking in, leaving a feeling of gratitude just for the opportunity to shout such a powerful refrain with a sense of justice and truth. Something easily confirmed by the guys in the band, that manifest a true sense of concern about politics as part of punk-rock: “The absurd excess of surveillance and censorship are some of the features of our society besides the wickedness towards the weaker or those who are not like to you. Nowadays the governments and the media want to scare the population so they can then justify their actions that actually only serve to have greater control over each one of us.”

Especially in Italy, we are not living a good political period. Everything now is just focused on immigration, gentrification, homophobia and sexual discrimination. Finding an enemy to fight (of course better if weaker than you) it’s a pretty dumb and easy way to make you feel better and make you believe that you will solve all your problems. Unfortunately, people are following this trend more and more and that’s the scariest thing.”

The fact that that English is not their native tongue, just makes the lyrics even more direct and straight to the point, without ever sounding naive. And surely it’s no coincidence that the singers’ name is Iggy since deranged is one of the first adjectives that come to mind. There are also specific lyric parts where he sounds desperate and filled with disdain as if life was nothing but a dead-end. In fact, these guys seem to have no lack of Stooges moments, like in a recent Zagreb show when some random dude took off his pants and started jerking off in front of the drums, shouting and trying to encourage the band in joining him.

As memorable as that may be, every single song on the record is even more so. Which makes sense, since their influences are pretty much a mixed bag of fast melodic punk bands, from KBD obscure jams and 77 punk/power-pop to more recent stuff like bands on the Dirtnap rooster and more contemporary Swedish stuff.

The best thing about Shitty Life, besides their name, is that the glam about it all is the lack of glam about it all. Meaning that they’re not out to sell a lifestyle or setting themselves out to be the next big thing. They’re just Lorenzo, Luoca, Piff, Nocciola and Iggy, five Italian punks that don’t really like to grandstand and are into music, above anything else. They are also anti-fascists and a 100% DIY band from the recordings to tour booking, merch, etc. They do everything by themselves even if sometimes it’s really hard “but in the end it’s fun and we can’t imagine another way to do it.”