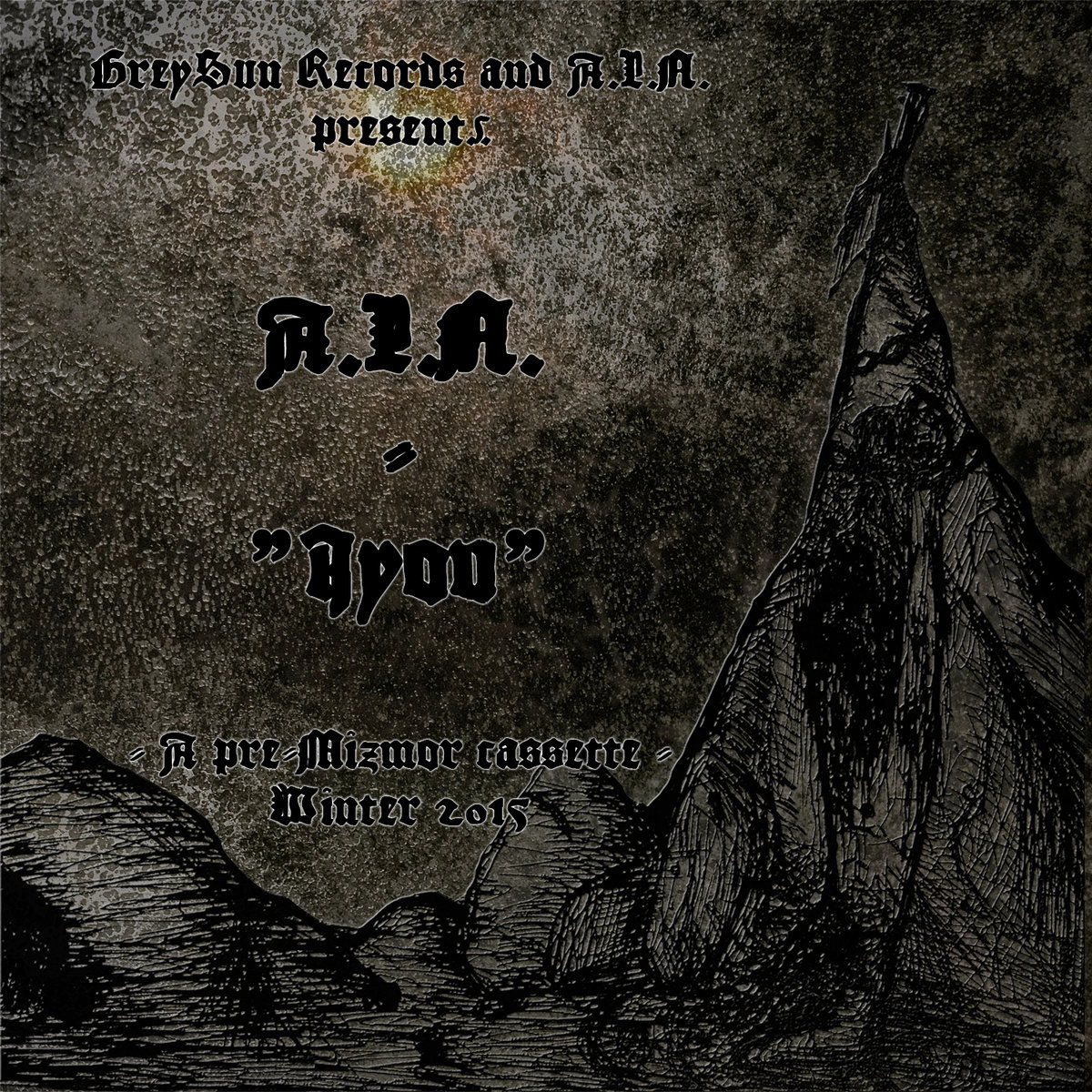 Mizmor, or מזמור, is the absurd brainchild of A.L.N., an obscure darkness-worshipping freak from Portland, Oregon, who also plays (as a live musician only?) in the doom metal misery machine Hell. When you run into such projects, essentially what you are up against is the personality, vision, perversions and sentiments exposing their interior torments in aural form; so it may not always make sense –and little does in the world of Mizmor – but it is definitely something fascinating to encounter. As you will learn by listening to this music, you can clearly tell that shit like this lives solely within the mind of A.L.N. and nowhere else, and is therefore something incredibly intriguing and captivating to absorb. It is fascinating to see someone’s mind open up to reveal their internal visions of darkness and ruin without following any fucking rules or trends whatsoever, but rather just coming out in its essential form, as pure thought and sentiment. This is what Mizmor’s music sounds like: it is the sound of a personal hell pouring out unfiltered and unprocessed straight from his mind, through the slow and agonizing movements of hands on six strings and a drum kit. Listening to this music is like opening a window into someone’s mind and quietly sitting in a corner to watch it all go down, to witness their emotions turn to dripping black slime and their thoughts and feelings coalesce into absurd vortexes of swirling and caustic murk. This time, though, A.L.N. has gone quite a bit over the edge, crafting something that in a way breaks the cycle of his past work and sets it on a new track. Distancing himself quite a bit from his past releases, which were almost entirely focused on raw black metal, this time with Iyov, Mizmor’s music appears to the listener in the shape of a shamanic, demonic and intoxicated swamp-dwelling monstrosity materializing in sonic form.

But Iyov is not only a comatose crawl into the marshlands, it is especially a work of potent shamanic and ritualistic power. The extremely psychedelic, trance-inducing, and dirgy brand of toxic and evil stoner metal that slowly unravels on Iyov is both classic and extremely out there-sounding at the same time, and showcases A.L.N. almost as if he has shapeshifted overnight into an extremely raw, agonizing and demented version of Electric Wizard. The riffs are slow, slimy, and fuzz-fueled mummifications of some weird and really out there Sabbath-worship that seems impossible to fully grasp or comprehend, and that appears to have remained trapped within an aborted nightmare…. Would I also dare to say that I hear Sleep, Candlemass and Revernd Bizzarre in here? Hell yes, and to be honest I even hear the Melvins in here, but heck, it all feels like it’s acid-drenched, deformed, surreal, unsettling and just fucking absurd. And then, thankfully, you have the releases’ credits to grasp on to before your brain unravels in a senseless attempt to interpret this new course for A.L.N.:

This album contains three lost songs recorded in years past that lead to the creation of Mizmor. The older two are under the moniker Sorceress, a long inactive stoner-doom band featuring A.L.N. (Mizmor) and M.S.W. (Hell). These were the band’s final songs, recorded and performed by A.L.N. after the band’s end. The third song is the direct precursor to the original Mizmor album. An instrumental song done in a more clean/ambient style, “0” by Mizmor.

All recorded on the same equipment as the original Mizmor, this album has the same lo-fi sound the first album is ironically praised for and sheds an interesting light on both the music of Mizmor and Hell.

“This is the beginning of my music made from suffering.”

Together from GreySun Records and A.L.N. on labeled black cassettes inside O-Cards. Contains mini-zine of A.L.N.’s art, corresponding to the time-period in which the music was made. Tape comes wrapped in A.L.N. logo patch, white ink on black canvas, tied with black cord. Edition of 150. Digital album available separately from A.L.N.

With that said, you can tell how in the world of Mizmor, and Hell and of A.L.N. as a whole, things can morph and change in unpredictable ways. The past come back to the present and re-presented it self, but changed, transfigured and turned into something new and unheard of.