Based in: Vancouver, BC/London, UK

This is probably one of my favourite photos. It pretty much encapsulates what I hope to capture every time I bring my camera to a show. A good friend of mine, Joe Briggs (check out his photography), recently told me that whilst his social media feeds are constantly filled with punk photos, he can always tell which shots are mine because you can see sweat dripping off foreheads and veins popping in necks. It’s one of the best compliments I’ve ever had. This was taken in the basement of a mediocre vegan junk food restaurant in London. I spent ten years of my life living in Norwich, and despite my best (and often successful) efforts to bring bands to the city, sometimes the promise of a handful of attendees on a Wednesday night just wasn’t enough. On this excursion to London I ended up having a weird allergic reaction to some wheat beer I was drinking and spent the best part of an hour puking in the toilets of a train, but I guess sometimes you have to suffer for your art…

I don’t really remember exactly when or why I first started taking my camera to gigs. I know for sure that I initially had no idea what I was doing, and to a large extent I’m still figuring stuff out.  Through pure trial and error I figured out where to stand (as close as possible) and at what moment to pull the trigger (when I think something cool is about to happen), as well as practical stuff like how my camera worked, what film to use and why going to a photo lab was a better idea than trusting a one hour pharmacy. Most of this now feels like an instinctive process and has become second nature, but it also took a while to build up the confidence to actually do it, and back when I took this photo I was more accustomed to tentatively standing somewhere near the stage and taking a handful of shots of each band without drawing too much attention to myself. Photos like this were important to becoming more assertive and confident, as I started to more regularly produce the kind of photos I liked and realised what it was I was trying to capture. Most importantly, I started to believe that I could actually produce something other people might want to see. The same events and people can be captured in an infinite number of ways, which is one of my favourite things about gig photography. The things you consciously and unconsciously do help put your own specific stamp on familiar events, and just like you never stop learning, your style is always evolving.

This photo was taken at The Grosvenor in South London. The backroom of the pub held pretty much every decent punk gig in London around this time and was the site of my earliest involvement in true DIY punk and hardcore as a gawky teenager. Inevitably The Grosvenor gave way to the march of gentrification and wankers that move into posh new flats opposite a pub and only then decide they don’t like living opposite a pub, but thinking back to that time invokes a lot of nostalgia for the gradual demystification of contemporary punk, and the excitement of discovering a thriving underground an hour away from my Essex doorstep. I think this was the first time I saw Skiplickers, supporting the almighty D-Clone. I always felt like Skiplickers were pretty underrated domestically (outside of Yorkshire at least) and in general compared to the way similar bands were received elsewhere, but it says something for the enduring nature of DIY punk that 7 years on I still find myself taking photos of the singer Bry’s bands.

I moved to Vancouver in August 2018. Prior to this I had been living back in Essex with my parents for over a year, whilst I laboured to finish my PhD. Unsurprisingly a lot of things felt pretty stagnant in my life as a result, including my photography as I just hadn’t had very many opportunities to get out and shoot. The Fun Is Over festival happened a few weekends after I finally arrived in Canada, so the dramatic change in my life circumstances and chance to take photos again felt pretty exhilarating. The main shows were held at The Black Lab, which is a volunteer run DIY space in the middle of Vancouver. It seems like there is a punk fest happening somewhere in the world every week at this point, and whilst thats cool for those of us who like getting out of our minds in different cities, The Fun Is Over was an important reminder of where punk’s vitality, energy and ‘authenticity’ comes from. Legendary names, reformations and flying bands in from across the world is obviously key to creating a buzz about your fest, but that has sometimes come at the price of maintaining what is appealing about DIY punk in the first place- the communities that exist on the margins or in opposition to the rest of the world. The Friday night of the fest captured the difficult to explain essence of that for me. A couple of hundred punks crammed into a sweaty shoebox, and as bands like LA MISMA and ETERAZ raged with purpose, literal children stood in ear defenders at the side of the stage losing their minds. At that moment it felt like the decision to move across the world to this city was the perfect one, but I know that you can find these alternative pockets almost anywhere, even if you have to make them for yourself.

This photo was also taken at The Black Lab. At this point in my life I end up knowing, at least superficially, a lot of the people I photograph,  but it’s hard to know how well these semi-portraits of performances represent someones personality, or accurately represent their on-stage presence. However, over the past couple of years, I’ve seen Eris tear things (mostly herself) apart several times, so I was glad I managed to see their final show and capture a couple of shots that felt appropriate. I can’t think of many more fitting ways for Cloaca to bow out than Eris to carving open her chest with a razorblade and trying to bum out as many people in attendance as possible. Recently someone who had never been to a punk gig before saw Eris perform, and asked me afterwards if punk bands were ‘always like that’. All I could say was ‘…sort of.’

By virtue of being stuck in the UK I never saw Gag when they were being hyped to oblivion, but watching them play in their hometown a couple of years later gave me a glimpse of why that happened. As silly and insubstantial as the ebb and flow of  punk popularity might be, seeing a band go off accompanied by a bunch of people actually doing something more than absent minded push moshing still triggers something in my brain. As I’ve already said, sometimes the satisfaction I get from taking photographs comes from being able to capture a specific aspect of a particular moment in time, or feeling like I have visually represented at least an element of why I still spend half my time thinking about or watching punk bands. However, there’s also added and hidden bonuses, like being able to revisit your photos and picking up on things you didn’t even notice as events erupted around you. The photos I took at this show combined elements of both these things as I somehow managed to document the gradual disintegration of Adam’s jeans. The full extent of this exposure actually only become clear to me a couple of weeks later when I returned home from the lab with my negatives and had a rude awakening. Luckily the restrictiveness of social media with regards to nudity hasn’t prevented me from being able to share some my favourite photos from the evening.

I absolutely love the Olympus Trip 35. My preferences with regards to film fluctuate occasionally, but one thing that has remained constant has been my use of this camera. It was the first 35mm camera I ever owned, a hand down from my Dad when I was a kid and needed something for a school trip to the zoo. I’ve kept that one, but it’s since been joined by about another ten. I’ve recently had to replace the one I have used for at least the last half decade, but didn’t realise it was broken until after I had used it for a full weekend at Have A Good Laugh Fest. There’s nothing quite like getting 5 mostly empty rolls of film back from the lab to really spur a comedown into life. I’ve been on a bit of a bad run with camera and flash malfunctions recently, and it never gets any less disappointing when stuff beyond your control sabotages what is easy to assume were the greatest photos you’ve ever taken… or at least the last chance you had to take photos of Zyanose. Very occasionally you get a happy accident in amongst the victims of flash malfunctions and detached lenses, one of those rare instances where the phrase about clouds and silver linings seems to make sense. This photo was taken when I travelled to Portland for a ridiculous couple of days to see Zyanose, Lebenden Toten, Frenzy and Physique earlier this year and whilst the vast majority the photos I endured bruised knees for were totally blank, capturing one of my favourite bands in a completely different way helped remedy the worst of my complete demoralisation. Sometimes you need to be able to focus on the positives to realise why it’s worth shelling out to replace broken equipment, rather than cutting your losses and getting a new hobby. 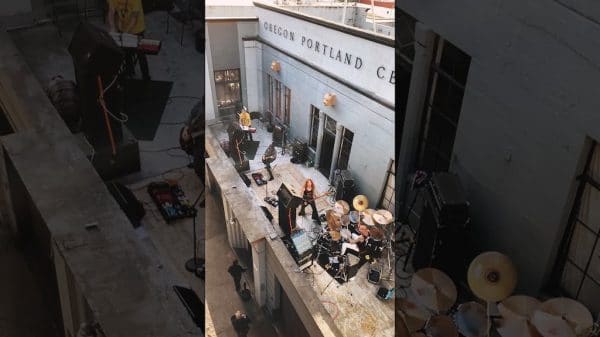