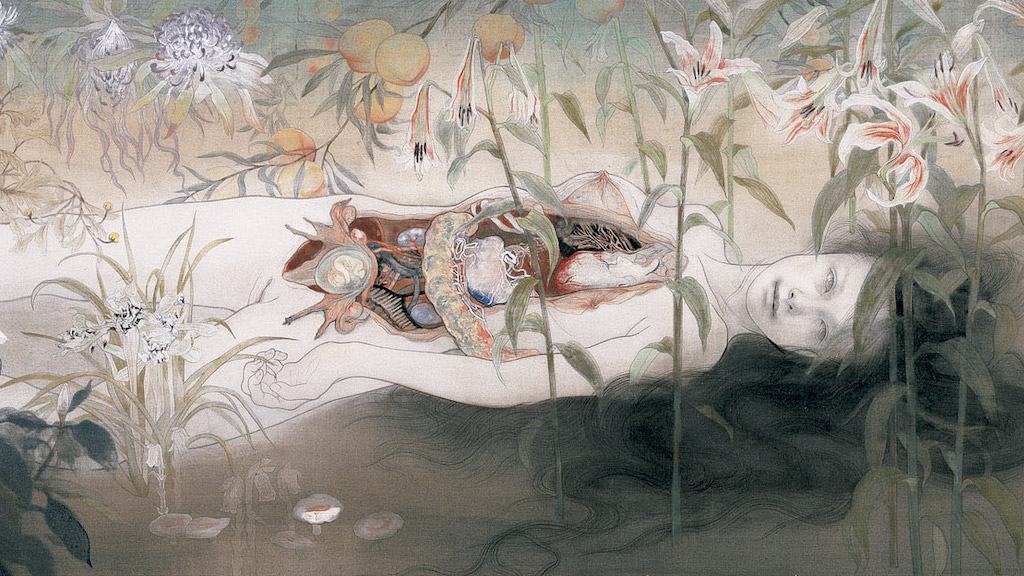 I can’t tell you how old I was when I first saw the corpse of a woman. Maybe it was on T.V. or in a movie, maybe it was in one of those ’80s People Magazine serial killer features. I can’t remember, but I do know that from a very young age I fantasized about protecting women from their murderers. I was maybe 7 years old, lying awake in bed, lucid dreaming about my child’s body turning into an invincible vampire who could scare away the men who stalked women and girls. I was the bait and the trap. Reading about what inspires Fuyuko Matsui in her creations, she and I share a similar fascination for death and decay, and also a similar viewpoint on how women’s dead bodies have been exploited (not even death stops that exploitation). Her art is inspired by kusōzu (painting of the nine stages of a decaying corpse), a 14th to 18th-century Buddhist art movement focused on the decay of the human form after death. Matsui explains how she interprets this classical corpse art here:

I did get inspiration from kusōzu, but I don’t agree with the Buddhist way of thinking,” explains the artist. “I think the kusōzu was originally used to teach men that even beautiful women can decay, so they should give up such carnal desires. This way of thinking is very male-centered and I feel an aversion to it.

In Shinto, too, I think concepts such as not allowing menstruating females to go through a shrine, and so on, are rather meaningless today. So I tried to paint a new kusōzu — from a female point of view.

In this article:Featured, Fuyuko Matsui