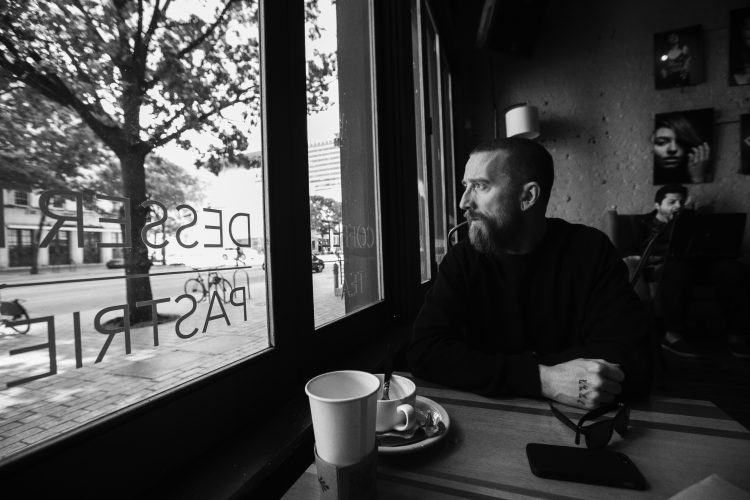 All photos and text by Bobby Cochran

The band lumbered southward into the open arms and more temperate climes of Richmond, Virginia.  Tonight was Aaron from Yob’s birthday, so post-show there were some shenanigans, but nothing too kooky.  I forgot to mention that Levy from Amenra is getting up onstage every night with Yob to sing “Grasping Air”, and every night I’m stoked to get out there and watch it.  And bummed if I miss it.

From Richmond we head to Raleigh NC and a strangely decorated club with virtually no backstage.  No worries, since we all had friends in town we wanted to hang with, including Caro from Oathbreaker, who lives a couple hours away but made the trek over to see her old Belgian pals.  Post-show saw another late night hangout with adult beverages, but everyone was up on time in the morning to have breakfast together.

We had a day off, so we opted to drive halfway to the next gig and stop in Asheville SC.  We hit town just as a torrential downpour opened up on us, flooding the streets and making shit pretty biblical for a minute.  All three bands ended up staying at the same hotel, so a big crew spent the evening in this giant video arcade, blasting old school space fiends to oblivion.  On to Knoxville, where the accents got stronger and the weather got significantly warmer.  The highlight of tonight came about two songs into Voivod’s set when the onstage smoke machine seemed to have set off the fire alarm (that could possibly have been my fault since Amenra love the smoke machine) and they were required by law to evacuate the entire building.

Atlanta’s show took place at the Masquerade, which is a huge multi-venue complex that used to be some kind of shopping mall.  There were literally three other shows going on at the same time as ours, and all of them were full of people.  It was pretty crazy.  It also had a totally Spinal Tap backstage entrance, which required a 6-minute walk from the back door.

On to New Orleans, where weird shit is always bound to happen. Our arrival happened to coincide with the French Quarter Festival, which meant the Quarter was jam packed full of people in various states of inebriation.  That city is built to support full-time alcohol consumption, and shit is on 24/7. The boys had never been to NOLA, but we literally spent 8 hours in the city so there wasn’t any time to explore beyond the few blocks around the venue. It’s a damn shame too, because New Orleans deserves some exploring.

And then… into Texas.  How shall I sum up Texas?  Well… Huston was another multi-venue building where the noise from each room bled into the other rooms.  This was a bummer for Amenra, who have some very delicate and subtle quiet parts in their songs and were totally overwhelmed with both the cover bands and the big room and the thrash metal bands in the small room next door.  On top of that, this crowd talked loudly ALL THROUGH Amenra’s set.  Super fuckin rude.  Austin was the weirdest gig, with the Yob/Voivod/Amenra show happening on a small outdoor stage while the indoor stage hosted the Adolescents and various outdoor stages in the immediate vicinity played various forms of blatting and buzzing electronic music. Total cacophony.  It was the first time on tour where there was NOWHERE to get away from the noise if you wanted to.  Dallas was another outdoor stage, this time connected to a two-story restaurant and bar which was kinda weird as well.  We also witnessed a gunfight between two speeding cars racing along the expressway about 80 yards from the venue, which the locals just shrugged at.  It was Voivod’s last show of the tour, so post-show there was a lot of hugging and picture taking before folks piled into their various vehicles and parted ways.

We had a day off to travel from Dallas to the show in Denver, CO, which we spent driving.  It took us ALL day to drive across Texas and into Colorado, where we collapsed into our hotel rooms for some much needed rest.  Denver’s show was pretty great, though kinda weird to not have Voivod with us anymore.  The club was pretty small and packed full of people. Pretty great vibes.

We split off from Yob, who headed into Arizona and So Cal for a couple shows while we had two days off to make the drive from Denver to Berkeley CA.  I’d suggested we take highway 50 that runs straight through Colorado into Utah so we could make a stop at Moab and spend a little time in the desert.  This we did, enjoying absolutely perfect weather.  We stopped at Arches National Monument for a quick sight-seeing, then sauntered around Moab, enjoying dinner and coffee and an easy peaceful feeling.  The next day was spent driving across the rest of Utah and Nevada, marveling at the vast expanse of desert and the absolute quiet of the place when we pulled over to stretch our legs.  We ended up in Reno, the Biggest Little City in the World.  It’s kinda like Vegas’ ugly and impoverished stepbrother in many ways, but the dudes managed to find themselves some fun in the casinos.

Berkeley’s show was Amenra’s first headlining show of the tour, and the turnout was pretty great.  They sounded great too.  This was more-or-less my hometown, so I got to see a bunch of familiar faces and stay in a familiar bed for a change.

The last show of the tour was in LA at a 4/20 festival called Psycho Smokeout.  Yet another multi-room venue with bands going from early afternoon to early morning.  We expected it to be a shitshow, but things ran pretty smoothly and the show was a pretty resounding success.  There were a lot of other bands to sit through before we got to see headliners Yob play one last time.  There was a fair amount of lingering saying long goodbyes and sharing just one more drink before everyone went their separate ways and we drove deeper into LA to our hotel. The next day most of the guys flew back to Belgium, while Levy and I drive back north to the Bay Area so I could head home and he could enjoy a week off before joining up with his other band Weigedood for their own 4 week US tour.

Huge thanks to the dudes in Amenra for having me along.  I’d do it again in a heartbeat.