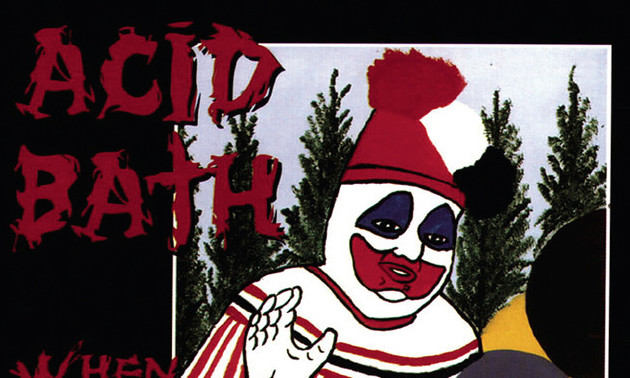 Rock Springs and the Legend of Dax Riggs

“Dax used to live here,” people said; or, “My older brother knew him.” I grew up in a small coal mining town in Southwestern Wyoming called Rock Springs. Kids at my junior high used to wear Acid Bath t-shirts and hoodies—the ones with the Gacy clown on front, which Acid Bath used for the cover of 1994’s When the Kite String Pops LP. Talk of Acid Bath in Rock Springs was always accompanied by whispers that the band’s legendary vocalist, Dax Riggs, now a well-known solo artist, had once lived in our shitty little town.

As I began listening to (nü) metal in earnest in junior high, it became an unspoken contest with other kids to know about the most intense bands and have the coolest merch. I paraded around in my Korn and Limp Bizkit garb, thinking I was a badass. And then I saw people wearing shirts inhabited by Pogo The Clown, ‘Acid Bath’ scrawled at the top in violent red lettering. I didn’t know who John Wayne Gacy was, and I had no idea about sludge metal. But I needed to hear that band. The image and band name had some dark gravity. At first, I was only able to hear Acid Bath by borrowing someone’s CD, or listening to it on their Discman at school. To my 13-year-old ears, When the Kite String Pops and Paegan Terrorism Tactics were fucking gnarly. Acid Bath’s grimy sludge, with Dax Riggs’ croon populating each song like a cadaver, only seems more intense as I get older.

The kids who knew about Acid Bath usually came from broken homes. Every person I remember wearing Acid Bath merch also spoke of this guy named Dax. Throughout high school, Dax’s name, spoken like legend, still came up when I talked to people about metal. If I mentioned to someone that I listened to sludge, they’d ask me if I knew about Acid Bath and then say something about their brother, sister, or older friend knowing the singer. The people rumored to know him were heavy as fuck: people who lived the hardest ways at the youngest of

ages, and who everyone in town knew not to mess with. Hard drugs were a ghostly presence when people said, “Dax lived here a long time ago.”

No one could ever offer anything concrete to prove the rumor, though. I recently asked some Rock Springs metal heads for leads, but it was the same as always: “I heard it from a friend’s older brother;” or, “I heard the same thing but have no idea if it’s true;” or, “I remember hearing that, and I’m pretty sure it’s bullshit.” The rumor of Dax living in Rock Springs might be a whisper in the Wyoming wind, but it’s a fact that Acid Bath has long had a following in the small town, which still seems weird to me. Outside of sludge junkies, not a whole lot of people know about Acid Bath, a band that hailed from rural Louisiana and was active throughout the ’90s. Why Acid Bath when more well-known Louisiana sludge acts, such as Crowbar and Eyehategod, never had the same following in Rock Springs? I started junior high in 1997, by the way—two years before Napster changed the world. When I was 13, we still called the internet the world wide web. That’s not how people in Rock Springs heard about Acid Bath.

Acid Bath’s obscurity might’ve made it strange that people in this remote and culturally disconnected town would know about the band. Considering the ugliness of the group’s music, however, it follows that people in Rock Springs would relate to Acid Bath. Surrounded by yawning prairie, wind blows constantly in the small town. People think of rain and snow as depressive forms of weather, and they are, but there’s something more insidious about the wind, eroding self-esteem slowly but surely, much like the way it gnaws at the sandstone cliffs that surround Rock Springs.

Rock Springs is a boomtown. In the early 1900s, you could get solid work in the coal mines. The cost of living was low, so you could buy or build a house and raise a family. Throughout the years, the town has also gone through multiple bust phases when jobs are harder to come by, people get laid off, and service-oriented businesses wither on the vine. Recent booms have revolved around oil and gas as hydraulic fracturing made massive methane deposits available for the first time in any cost-effective way for fuel companies. The work in Rock Springs has never been glamorous, but, during a boom, you can make $50,000 (and often more) with only a high school diploma or GED.

That type of labor takes a physical and psychic toll, though. Fucked up backs and knees are commonplace for Rock Springs’ workers; every once in a while, you’d also hear about some horrific work-related death, like someone getting crushed by a monstrous machine. Of course plenty of people dull the existential violence of that lifestyle with drugs and booze. Rock Springs is right off I-80, so it’s not hard to find something to shut off your brain. Considering the wind, long winters, isolation, harsh labor, and addiction, it’s no surprise that Rock Springs, as well as Wyoming as a whole, has a staggeringly high suicide rate. If you grew up there, you’ve known someone who’s died by their own hands. Suicide becomes a fact of life.

So when the children of coal miners and power plant workers heard Acid Bath, it made perfect sense to us: ugly music for an ugly world. It’s grittier and dirtier than anything under the umbrella of nü metal, making it the perfect soundtrack for life in an austere boomtown. Paegan Terrorism Tactics and When the Kite String Pops still place me right back in Rock Springs, and usually with unnerving clarity.

“The Blue,” the first track on When the Kite String Pops, emerges from a tunnel of antagonistic feedback. If you only know Dax Riggs for his solo work, you might be surprised to hear his gravel-laced scream atop woozy sludge riffage. Dax switches modes on a dime, intoning “But do you know what you’ve done? / Ants in the afterbirth / We’re slugs under the sun” in his gravedigger baritone, sounding like Lane Staley if he dwelled in the subterranean registers of Pete Steele. Whether it’s guiding Acid Bath’s skin grease metal or filling the space between lonely acoustic guitar notes in his solo work, Dax’s voice is unmistakable, a vocal fingerprint.

As with Rock Springs, Acid Bath isn’t all harsh ugliness. Seen through the right eyes, the endless expanses of prairie that grip the town are tinged with mournful beauty. In the winter, the morning sun catches hoarfrost in the sagebrush so it looks like the finest and most intricately-patterned crystal; and the wind sends wisps of snow dancing across icy highways like wandering spirits. Acid Bath finds its own bleak splendor through Dax’s voice, of course—but also in the pallid instrumentation of tracks like “Scream of the Butterfly.” A dismal guitar progression in the spirit of Type O Negative opens the song as Dax moans a story of hallucinatory horror. Similar to J.R. Hayes’ grisly narratives in Pig Destroyer songs, the lyrics of “Scream of the Butterfly” pinpoint uncanny details that quickly congeal, gaining a panicked momentum. Musically, the song is a folk-goth ballad that wraps around the throat, closing with an unexpected double bass pummel.

1996’s Paegan Terrorism Tactics hones similar elements, capturing Dax’s Jekyll-and-Hyde vocals, Mike Sanchez and Sammy Duet’s oil-soaked riffs, and Jimmy Kyle and Audie Pitre’s body-in-the-swamp rhythms with higher production value. It’s an underrated and menacing record that cuts its sludge attack with haunting quietude. Paegan Terrorism Tactics also features queasy cover art by Dr. Kevorkian.
Neither Riggs’ management nor his label responded to my requests to ask Dax about Rock Springs. In an interview for The Henry Rollins Show in 2006, Dax talked about dropping out of school when he was 13 and living “on the highway, kind of motherless” over the years. Since I-80 cuts through Rock Springs, maybe he stopped there for a year one night; or maybe Acid Bath played the town on its way to or from Denver or Salt Lake; or maybe Dax has no connection to Rock Springs whatsoever and someone made up the rumor because Acid Bath captured something real and essential about their hometown. What I know for sure is that I’m not the only kid who rode their bike down to Graffiti Records to find new music, thumbing past the Korn and Coal Chamber CDs but stopping, transfixed, on an album whose cover pulsed with adverse energy—that same image of Pogo on kids’ shirts at school—buying it from a clerk who said, matter-of-fact like, “My friend knew the singer. I guess he used to live here.” And I know I’m not the only kid who blasted When the Kite String Pops on their Discman and felt reassured by Dax’s spectral voice, like we’d been right about Rock Springs all along.