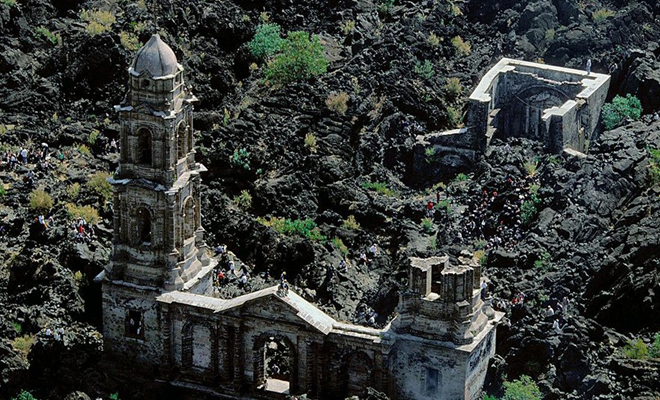 In some ultimate irony, the CVLT Nation HQ has always been located either above or below born again Christians. A friend said it may be the universe’s way of creating balance – blind faith vs. positive nihilism. While we blast blasphemous tunes and decorate our surroundings in the trappings of death and demons, our neighbors sing hallelujahs to Jesus. And on Thursday nights they invite all their friends over for a big, boring singalong – so it’s cracking me up listening to them while I put up a post about churches that have been destroyed by “an act of God” – aka volcanic eruptions. Check out this list of 7 churches that have been burned and buried in the fires of Hell!

Photos and text via scribol.com This incredible image shows a church that was totally engulfed by lava and other volcanic material, on the island of Montserrat. The sight of a place of worship so utterly stricken is not easy to forget.

The Soufrière Hills volcano began erupting in 1995. People were soon evacuated but were allowed to return within months. Unfortunately, in 1997, pyroclastic surges and ash from further eruptions destroyed the capital city of Plymouth. Two thirds of the island’s population had to relocate, and Plymouth was abandoned. Nineteen people were killed and the city was buried beneath four feet of ash. The hot debris, pyroclastic flows and lava swamped and incinerated buildings and had the density of concrete. This church had little hope. In 1943, the volcano that would be named after the nearby village of Paricutín, in Mexico, erupted. Lava crept towards the churchyard of the neighboring village of San Juan Parangaricutiro, gradually liquefying the churchyard walls and covering the graves of the souls resting in it. The lava and ash buried the villages themselves, but miraculously the molten rock stopped before it reached the bell tower – and the altar – of the church. The lava from the Paricutín eruption traveled slowly, taking a year to reach the church, but the eruption itself had begun at a much quicker pace. After the initial explosion of rock and hot ash on February 20, 1943, the volcano started to rise up in a farmer’s field. Within a week, it was the size of a five-story building, and it continued to erupt – and grow – for eight years, eventually reaching a height of almost 1,400 feet. Yet the San Juan Parangaricutiro church withstood the ravages of the volcano, the main body of the structure remaining intact even as everything around it was devoured. The villagers, none of whom died because of the lava (three were killed by volcanic lightning), moved to a safer location, and today the church half-buried by hardened rock is a major tourist attraction. This church was blitzed by lava that all but overwhelmed it from behind when Mount Etna, on the island of Sicily, erupted in 1983. The roof was crushed, but much of the volcanic debris flowed to one side, sparing part of the structure.

The facade of this church in Sicily was left relatively unscathed, yet the missing door shows the depth of the lava, now solidified, that swept through the building. During the 1983 eruption of Etna, earthen barriers were used to divert the flow of lava from human settlements. Housing estates, the Grand Hotel of Etna and the Astrophysics Observatory were all saved by this course of action. Unfortunately, this church wasn’t so lucky. Nothing is left standing of the Cagsawa Ruins, in the Philippines, except the once proud bell tower and parts of the convent. This baroque church was built in 1724 by Franciscan friars and was meant to replace a church that had been burned to the ground by Dutch pirates. Yet it was devoured by either pyroclastic flows or a lahar (volcanic mudflow) in 1814 after the nearby Mount Mayon volcano erupted to devastating effect. This catastrophic eruption of the Mayon Volcano claimed the lives of some 1,200 people, including hundreds from the town of Cagsawa who are said to have sought safety in the church. The town itself and other surrounding settlements were buried beneath hundreds of millions of cubic meters of ash. The facade of the Cagsawa church stayed standing long after the 1814 eruption, but it is thought that earthquakes in the 1950s destroyed that portion of the structure. Today, the beauty of the place almost belies its tragic past, but the church is considered a symbol of the dangers of being situated near such a gargantuan volcano. The ruins of this church still stand tall in an incredible bed of solidified lava left by Mount Matavanu, on the Samoan island of Savai’i, following the volcanic eruption that began in 1905. Between 1905 and 1911, lava flows on Savai’i headed towards and into the sea, destroying villages in their path – together with buildings like the large stone Church of the London Missionary Society. Here, the lava flowed through the front door of the church, filling it to a depth of up to two meters. One spot that wasn’t destroyed in the area around the Samoan church was the ‘Virgin’s Grave,’ the legendary resting place of a nun – which the fast-moving molten rock flowed around rather than over. This is remarkable because the lava flows were massive in their extent – covering 40 square miles, and 400 feet deep in places. In 1928, Mount Etna erupted, sending forth lava flows that annihilated the town of Mascali in just two days. The church was in the northern quarter of the town and was one of the few buildings that escaped total destruction. Before the eruption ended, the lava destroyed Mascali’s train station and breached the local railway line. Interestingly, the evacuation and rebuilding of the town was seized upon by Mussolini for propaganda as an example of his regime’s efficiency, and the fascist symbol of the torch can be seen on the new church above the statue of Christ. Almost nothing in the town of Misterbianco survived the fury of Mount Etna’s lava flows after the volcano’s eruptions of 1669 – nothing but a church whose crumbling ruins remain to this day. The stump of the bell tower became known as Campanarazzu. You can see the solidified lava surrounding the structure with its ruined wall. Misterbianco was just a few miles west of the city of Catania and was one of at least 10 settlements destroyed in Mount Etna’s largest and most destructive eruption. The beautiful ancient church in San Sebastiano al Vesuvio was destroyed during the last eruption of Italy’s Mount Vesuvius, in 1944. Lava or other volcanic material engulfed it, and as the image shows, not much of the lower half of the building was left unscathed. During the eruption, which lasted from March 18-23, 1944, up to 88 planes were damaged by hot ash and volcanic rock that rained down on the nearby United States Army Airforce (USAAF) base at Pompeii Airfield. World War II was raging, but Vesuvius cared not a jot.