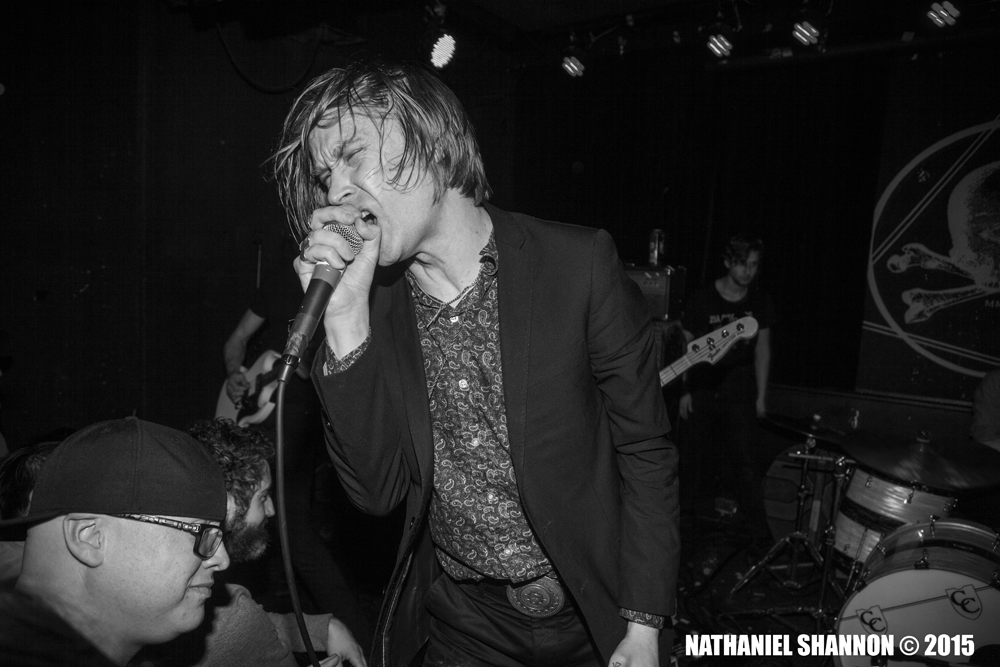 Let’s just get this out of the way. I really didn’t care about Refused up until the other night. Honestly, I never got into them upon their initial explosion. Nor did I ever once feel like I was missing out on something spectacular. I have a number of friends who, over the course of Refused’s existence, would swear up and down that they are the real deal and I really needed to have a sit down with their records. I’ve always taken those rants with a grain of salt and a subtle eye roll as they attempted on selling this band to me. So flash forward to last week, when a little bird informed me that they would be playing a very, very secret late night show at Saint Vitus in Brooklyn. After some internal debate, I came to the conclusion that there was no better venue in which I could witness and digest this re-formed, semi-legendary four piece. Immediately upon this realization, I reached out Sean and Meghan here at CVLT Nation, and thanks to their vast, spiderweb-like connections they were thankfully able to slide me into the show so that I could attempt to get a better understanding and appreciation for Refused. Before I start off with the show, I just really wanna express how much I love Saint Vitus. For those who haven’t been able to witness a show here, next time you’re in NYC, mark this one on your to do list. Every show I’ve had the fortune of attending here over the last few years has been a stellar production and event. From the sound – which is always pummeling and ear-shredding – to the awesome drink specials that never really tax your wallet too much. That is if you can exercise some degree of moderation. Just to try and avoid the Bishop drink special, which consists of a tall can of PBR and a shot of Evan Williams. You’ll be paying for it the next morning, a lesson I’ve yet to learn after all these years. That being said, this is a top-notch venue that caters to those who really eat and shit music. This is a venue that has built a reputation for putting on one of a kind shows by some of the most celebrated bands in underground music. The type of shows that are talked about for weeks to come. Shows that are viewed over and over again online by those less fortunate to have not been there at ground zero. So really, it’s a pretty safe statement for me to make that I was anticipating something special on this night, as to what was going to be my initial induction into Camp Refused. Brooklyn favorites Primitive Weapons opened this one up with yet another dominating display of fury that they’ve come to be known for. It’s been awhile since I’ve seen this band in the live setting. More to my own lack of motivation in actually going out into the real world than their presence in the “scene.”  That being said, they still fucking ignited the crowd with their first song and didn’t stop till the last note reverberated across the venue. A great set consisting  of older material from The Shadow Gallery, with a few new songs sprinkled like dried blood on a white t-shirt between them. I’ve always enjoyed their older stuff  but the new songs really showcased a maturity that I was kinda of surprised by. Lead Singer David Castillo had no problems working off the crowd and had a damn fine stage presence which inspired the rest of the band to continue dropping sonic hammers onto the audience. The newer stuff had me actually hyped to see some future-recorded outputs from them as it’s been awhile, at least to my knowledge. I know they dominate a number of shows in Brooklyn and have have garnished some attention outside of NYC, but I’d really like to see this band get the attention they deserve on a national level. Let’s hope that day is coming soon. Finally, at around 2:00 A.M., Refused parted the crowd as they made their way up to the stage. One could already tell that the band was exhausted, as they had just played a roaring (from what I was told) set at the Music Hall of Williamsburg earlier on that night. I had been hyping myself up since my arrival as to what I should expect from Refused. Was this going to be a set of their greatest hits? All new stuff? A mix up of both? Would my lack of appreciation and for their history and catalog really hamper my overall opinion while watching them? I’ve witnessed the crowd at Vitus exploded with a much anticipated band’s first song. So there was that initial wondering of how willing I was to allow myself to get pummeled in order to wrap my head around their sound. More importantly at this point, how much beer would I end up spilling onto the ground? Luckily, Refused pulled a quick one and surprised everyone in attendance by rocking out a sweet cover of Fugazi’s “Bed For The Scraping.” It caught everyone off guard, but in all honesty, it set the tone for the rest of the night. Right off the bat, my respect for this band who up until that point in time I could have cared less about, shot up around ten points. Watching everyone’s hands go up in the air to clap along and scream at the top of their lungs pulled a half-cocked grin out of me because it just felt so right. As if this wasn’t enough, they pulled out a pretty sweet cover of Black Flag’s “My War,” which really cemented the fact that this was indeed a loose, fun set for the band meant to be a thank you for their fans. Perhaps in what was the highlight of the show for me personally, was that they deemed the crowd worthy of hearing their take on “Fairies Wear Boots” by the almighty Black Sabbath. Much to my surprise, Refused didn’t really stray too far away from the original song and showed the chops and respect that this classic piece of history deserves. I’m all for bands doing cover songs, but respect the source material or else you run the risk of butchering it. Without a doubt, Refused nailed every note and bluesy groove that this song exudes and left the crowd applauding like the sound of thunder rolling through a valley. Throw in what I later came to find out was a new song, a few quick stabs at Judas Priest and Snapcase for shits and giggles, and you have one sweet set that left everyone who either rushed here or had advanced notice extremely pleased in the bands late-night, sonic offering. For those long time, die hard fans in attendance, Refused were kind enough to suffer a little more for the sake of their art with a searing encore composed of their trademark song “Ballistic,” which was pretty much the one original song by them that I could actually recall knowing. At this point, it didn’t really matter, as I was sold on this Swedish machine. My head and ears were completely in-sync on this track and one could almost see the love pouring out of the crowd before and after Refused’s encore. A fact that left my eyes squinting and thinking to myself  “What the fuck was I doing by not checking these dudes out? Was I really that snobby when they first started making waves? Damn, I should have taken a break from my Crust-core, Black Metal obsession and maybe given this band a chance. Shit, I’m old.” At the end of the night, I stumbled out of Saint Vitus yet again. Perhaps a little too drunk and my ears most certainly irreversibly damaged just a little bit more than when I walked in. My respect and interest for Refused grew a great deal from this set; it left me regretting that I hadn’t listened to all those cheers of unabashed love for this band over the last decade and a half. Perhaps if I would have pulled my head out of my ass all those years ago, their highly-touted reunion might have really meant a great deal to me. Alas, I was behind the times yet again. But at least I saw this band tear up Saint Vitus with a set that while fun and not really serious, was still something special to witness. It managed to cut through the old, jaded piece of me that has come to compose my blackened carapace and left me with that youthful feeling of being a part of something. Ultimately, at the end of the day that is the real reason why we are all a part of this whole music thing. So while it might be fifteen years too late, thanks Refused. You’ve made a new fan out of me. 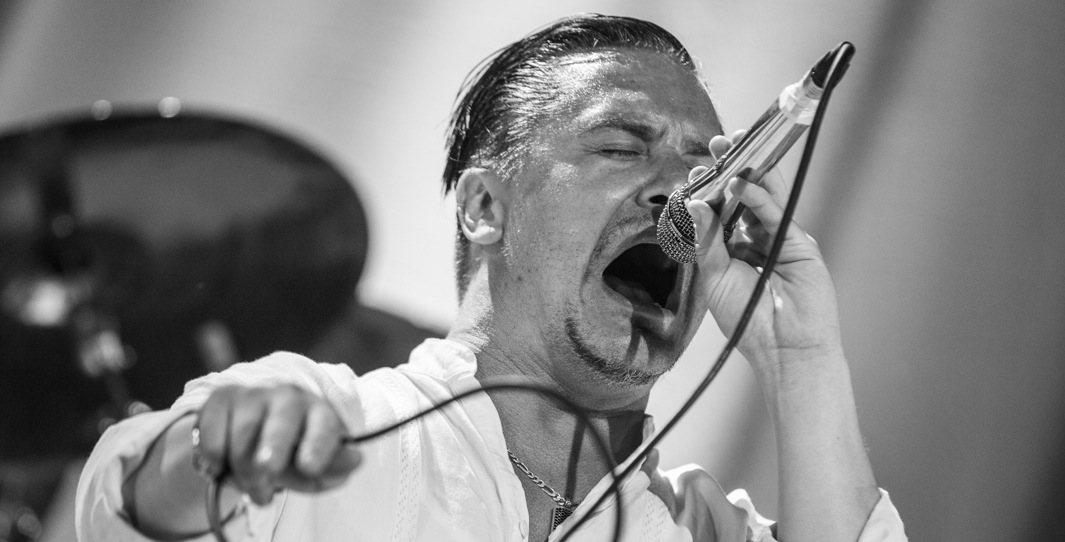 All Photos & Text by Nathaniel Shannon FAITH NO MORE & REFUSED at The Theatre of Madison Square Garden. REFUSED at the Studio of Webster Hall....

Now this is just too rad not to post today… REFUSED killing shit in front of 250 people at St. Vitus in Brooklyn last... 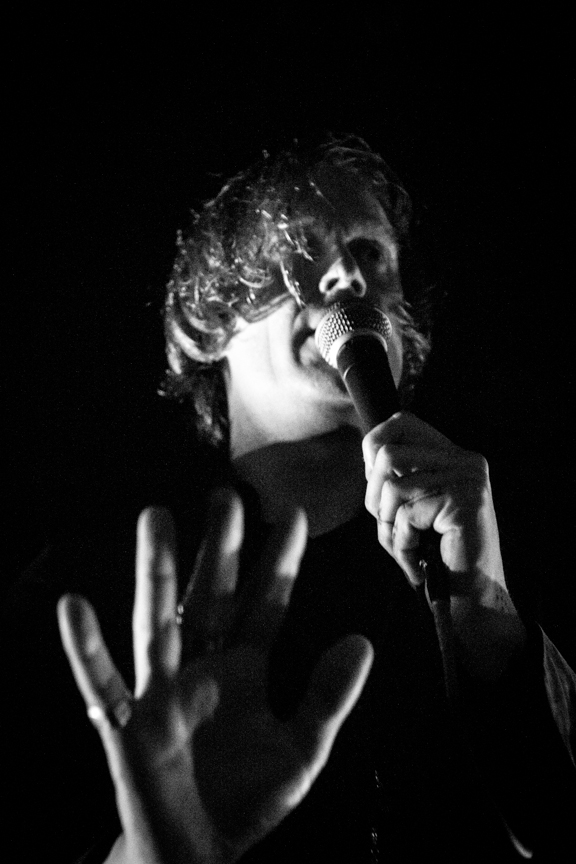 Text and photos: Bobby Cochran There are so few bands that, after a 15+ year hiatus, can still tap into all that made them...