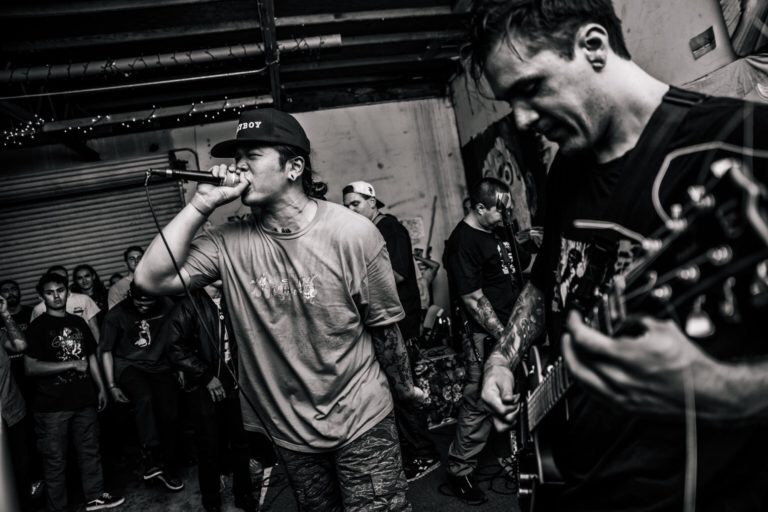 A barely audible missive followed by an unsettling belch of ambient hip hop that wandered off the campus of wherever it is that Dr. Octagon works, and the squeal of feedback… thus begins the uncompromising pummel that is “Blueprint For Destruction.” Released in the first quarter of the year via the ever-reliable Flatspot Records, the EP from Hands Of God is a harrowing masterclass in heavy Hardcore. The San Jose five-piece trades in scathing Metallic hXc that, while reminiscent of both late 90’s/early ‘oughts and their heavier contemporaries, ultimately owes no debt. Both recorded and mixed by Taylor Young at The Pit in Van Nuys and mastered by Bill Henderson, they manage a clarity and spaciousness where one would typically find suffocation. The intricate linework and gorgeous design was handled by one Dom Pabon, who conjures the visual end of their bent and violent mission statement accordingly. Hands Of God is comprised of certifiable heavy hitters that have served hard time in, among others, Gulch, Vamachara, Lead Dreams, and Drain. These scene vets clearly know their way around a song, crudely stitching together crushing Hardcore that feeds from their adjacent interests.The half dozen track herein all bludgeon and opener “Blueprint” splits the difference between the aforementioned nightmarish sample and a towering riff that only teases the impending destruction of “No Mercy.” Full disclosure, this merciless second song is a next level banger. It’s cold open of rimshot drum stick work that bleeds seamlessly into a martial snare run is no match for the tsunami riff that follows. In the realm of heavy Hardcore, this is an instant classic. There’s a rhythmic interplay that weaves itself between the blackened cascade of guitar and the vocals, which come off more frenzied and manic due to their higher register. Featuring on the track is Tyler Mullen of Year Of The Knife. Though sonically related to their friends in the first state hXc unit, Hands Of God play more within the confines of mid-paced stagger and swing. The flourishes of speed play all the more threatening as they pounce from unexpected places.

“Sacrifice” offers a fitting soundtrack to satisfy its namesake. With a seemingly endless supply of guitar lines, the double bass gallop of the intro is soon swallowed whole by a crushing section. Down in both tempo and tone, it recalls royalty. At turns, there are nods to All Out War and, of course, Merauder, but there are flashes of thrash guitar flare that pick the corpse of the Big Four in much the same way slower Integrity once did. More current touchstones would be Eternal Sleep or a more frantic Xibalba. Comparisons aside, what Hands Of God display is far more idiosyncratic and uniquely their own. As the song winds threateningly into its last moments, there’s a fleeting moment of silence that, even if extended, can’t save you from the titanic heaviness of the breakdown that follows. It’s utterly brutal and perfect.

Elsewhere, chopped and staccato riffing abounds. The noisier passage half mast in “245A” sounds downright harmful to the instruments themselves. “Ethnic Decay” and the closer “W.M.D.” both employ one of HOG’s most intimidating weapons with a dual vocal approach that’s frankly unmatched in today’s hXc scene. The bad cop/worse cop attack done to an absolutely fearsome and ferocious standard is yet another keystone to their righteous cacophony. Plying a trade that’s forged in steel, Hands Of God gladly worship at the altar of the riff. That they can elevate the beatdown into an artistic vision of destruction and nihilism is an enthralling accomplishment. Through and through, we’re constantly reminded Hands Of God is a Hardcore band, yet buried in their blueprint is a painstakingly assemblage intent and execution.

Having shared stages with a veritable who’s who of the Hardcore zeitgeist, Hands Of God have found themselves occupying the sweet spot of being able to play within and across genre barriers. Cali peeps can catch ‘em next slaying at The Catalyst in Santa Cruz on May 1st alongside heavy hitters Knocked Loose, Harms Way, Acacia Strain, Sanction, and Higher Power. Pick up the 12” via Flatspot. You’re welcome.