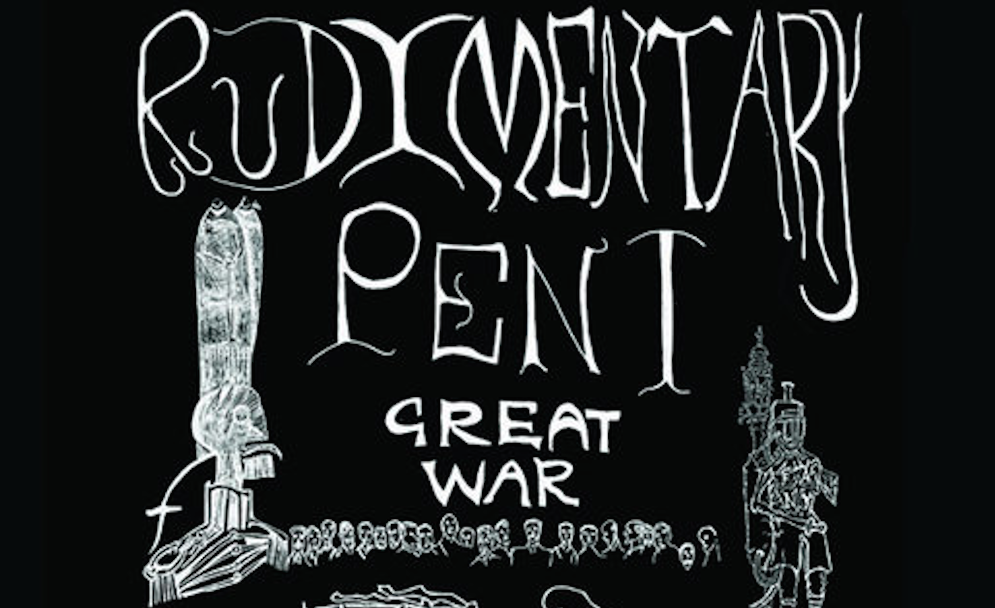 Rudimentary Peni, the notoriously reclusive and long-running British punk power trio from London, England, who started in 1980, has just announced a new 10-song EP, The Great War. The long-waited EP is already up for pre-order at the Sealed Records official Bandcamp page, which lists an official release date of April 23, 2021.

So far, two of The Great War‘s ten tracks have been put up as a teaser, and these tracks promise the same sort of doomy, minimalist, aggressive dark punk that was showcased on the three dark EPs Rudimentary Peni released in the first decade of the 2000s. Although Rudi Peni’s members are all hovering around the 60-year-old mark now, and have endured a score of illnesses and personal setbacks, the legendary outfit has lost none of their primal, caustic edge.

On the new tracks, singer Nick Blinko growls and shrieks just as he did on the classic 1980s Rudimentary Peni anarcho-punk releases (see below); drummer Jon Greville (who has also spent time in goth and postpunk groups like Snake Corps and Sad Lovers and Giants) powers ahead on his kit like a 20 year old high on uppers; and the always-reliable bassist and band song co-writer (and cancer survivor!) Grant Matthews diligently provides the propulsive backbone and underlying melody to the new previewed tracks.

Truth be told, The Great War was recorded some years back, as early as 2009 or possibly as late as 2013. Or perhaps the songs were recorded across those years. At one point—around 2012—Rudimentary Peni’s old label, Southern Records, had advertised “The Great War” as a release coming out with an Outer Himalayan catalog number. (Outer Himalayan is, of course, the label owned by Rudimentary Peni singer Nick Blinko.) But within a few months, the announcement mysteriously disappeared. Fans wondered what happened to the promised release and many supposed the release would never happen.

Of course, Rudimentary Peni began in 1980 and are one of the core bands of the early Crass Records anarcho-punk roster, helping to define the original anarcho-punk phenomenon that took the professed politics of bands like the Sex Pistols and The Clash seriously. In the Rudimentary Peni song “Rotten to the Core,” singer Blinko bellowed:

Why is it that rock stars / Always seem to lie so much? /Joe Strummer once said he cared / But he never really gave a fuck! / He said he’d use the money he made to set up a radio station / To make the airwaves full of something more than shit / But have you noticed we’re still waiting?

Peni never broke up, really, although they had periods of hiatus, sometimes lengthy. Bassist—and underrated co-writer of many of the band’s songs—Grant Matthews contracted and then recovered from cancer. Nick Blinko’s worsening mental illness necessitated confinement in psychiatric asylums; one such hospitalization led to the recording of the Pope Adrian 37th Psychristiatric LP in 1992, though that album was not released until 1995. Nick Blinko began to make a name for himself both as an outsider artist and a horror writer, of sorts, starting with the publication of the quasi-autobiographical punk-horror novel Primal Screamer.

Rudimentary Peni rarely grants interviews and are pretty “off the grid.” Yet this has added to their mystique.

I only hope Rudimentary Peni will keep making dark, meaningful punk rock until they die. They seem determined to do so. We need to respect this. This is top shelf dark, aggressive punk rock.

You can order Rudimentary Peni’s new EP here.
RUDIMENTARY PENI are off the grid but their label maintains a page here.